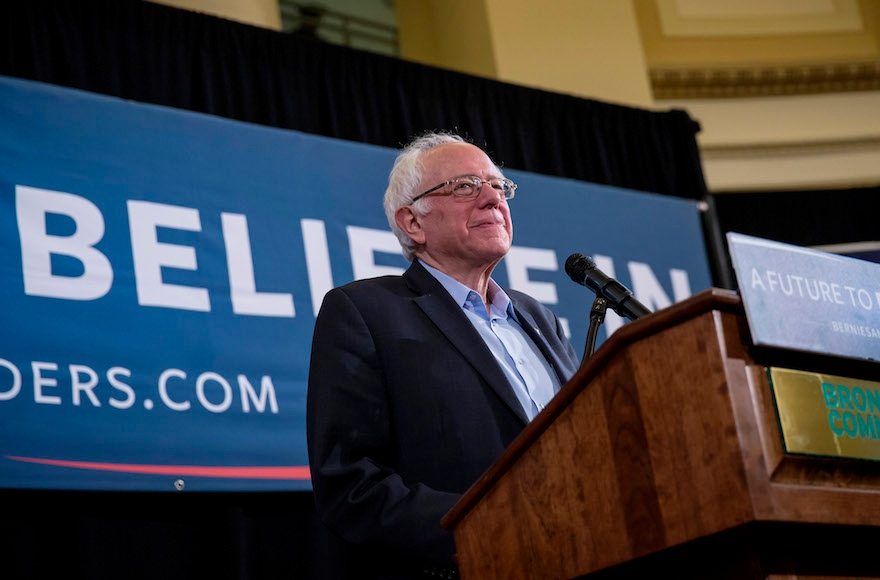 WASHINGTON (JTA) — Hillary Clinton and Bernie Sanders appeared to split two Democratic primary contests on Tuesday, with the Jewish senator ramping up his rhetoric against the party leadership as the odds of claiming the nomination fade.

A number of media outlets predicted Clinton would win Kentucky, where she led Sanders by half a percentage point, 46.8 percent to 46.3 percent, with 99 percent of the vote counted late Tuesday night.

Oregon became the 20th state to go for Sanders, the Independent from Vermont and the first Jewish candidate to win major party nomination contests. He defeated Clinton, the former secretary of state, 53 to 47 percent.

Clinton continues to hold a substantial lead in the delegate count, 2,291 to 1,528, with 2,383 needed to win the nomination, according to The New York Times.

The Sanders campaign and the Nevada Democratic Party continued to tussle after a chaotic delegate-selection convention in the state last weekend.

Sanders backers accused party leaders of allowing irregularities that allowed Clinton to take more delegates. Supporters of Sanders shouted down pro-Clinton speakers during the convention and there were reports of shoving.

Clinton won the popular vote in the state in its February caucus, but a complex and lengthy delegate selection had raised hopes in the Sanders campaign that its candidate could emerge with a majority of delegates.

State party officials were flooded with threats in the days following the convention, and the state and national parties sought a condemnation from Sanders.

Instead, in a statement, he condemned violence on all sides and warned the party’s leaders that “millions of Americans are outraged at establishment politics and establishment economics.”

Campaigning in Carson, California, which has a primary on June 7, Sanders on Tuesday repeated his pledge to stick it out through the convention in July.

“We are going to continue to fight for every last vote until June 14, and then we are going to take our fight into the convention,” he said.

Sanders in his speech decried the influence of billionaires on politics, singling out Sheldon Adelson, the pro-Israel casino magnate who has reportedly pledged over $100 million to Trump’s campaign.

“A guy named Sheldon Adelson, also one of the wealthiest people in America, a billionaire who is prepared to contribute huge sums of money to another billionaire named Donald Trump,” Sanders said. “The American people are sick and tired of billionaires running our economy and our political life.”