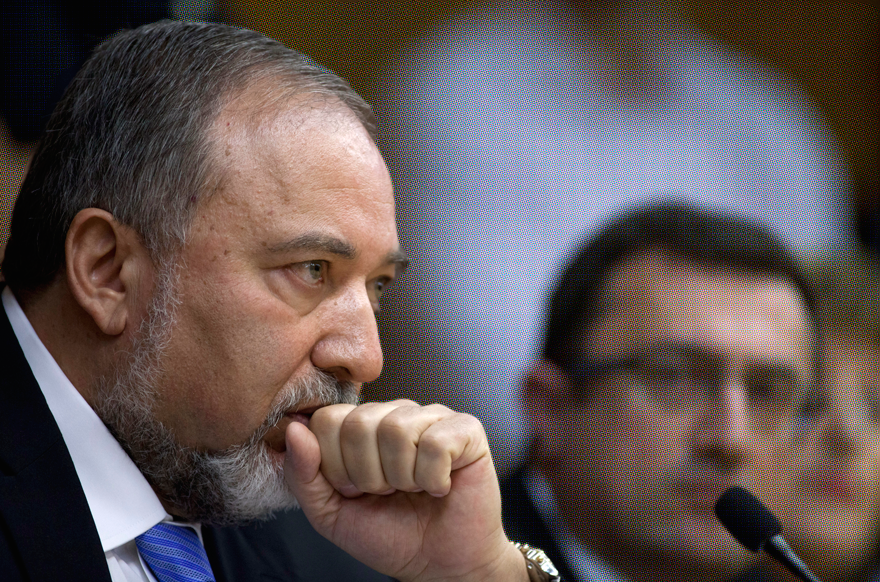 Yes, there’s the Avigdor Liberman who wants to behead bad guys, mandate loyalty oaths and pay Arabs to leave the country — the one who makes fun of the disabled and who dodged a fraud charge.

But Israel’s onetime foreign minister and maybe-next defense minister is not quite the cartoon he’s made out to be – OK, the cartoon he at times seems determined to make himself out to be.

As defense minister, Liberman would double to two the Cabinet ministers who have seriously considered a two-state outcome: himself and Prime Minister Benjamin Netanyahu. He is more deferential to the United States- Israel relationship than Netanyahu. And his posture toward Israel’s Arab neighbors is not all threat.

It’s time to review three areas where the once and possibly future member of the security cabinet has served as a voice for moderation – but also to keep in mind how his rhetoric undercuts his apparent restraint.

Two states for two peoples, or transfer and a recipe for unrest?

Liberman has spoken seriously and extensively about peace, and has in fact embraced two states, even though he rankled disability advocates a year ago when he called two-state advocates “autistic.”

One of his most radical ideas would crack the sequencing that famously helped scuttle the 2000 Camp David peace talks: Yasser Arafat, then the Palestinian leader, was considering embracing then-Prime Minister Ehud Barak’s proposals, but balked when he toured the Arab and Muslim worlds and was told he would be seen as a quisling if he agreed to Barak’s terms, particularly on Jerusalem.

Liberman’s solution: negotiate holistically. Make peace with the Arabs and the Palestinians simultaneously. It’s a plan that would allow the Palestinians greater leverage, should they coordinate with other Arab nations to extract concessions. That’s one reason why Netanyahu insists on direct talks, where Israel holds more cards. But, the thinking goes, it also could lead to a more stable and permanent peace in the region. Liberman, looking toward activating this plan, could keep Netanyahu focused on working with moderate Arabs in the region.

“The security advantage means cooperation with moderate nations, exchanging intelligence, joint efforts,” Liberman told Al Monitor in 2014. “With regard to this facet, our partners could gain very nice inputs. And there’s also the economic sphere. I am convinced that one day, we’ll have embassies in Riyadh, in Kuwait, in the Gulf States and other places. The combination of our initiative, technology and knowledge with their tremendous financial reserves can together change the world.”

His proposal to swap heavily populated areas – Arab-heavy regions of Israel bordering the West Bank with Jewish-heavy portions beyond the Green Line – is what has stirred controversy. Liberman tries to make it sound like common sense: Jews want to live chez-eux, why wouldn’t Palestinians?

For one thing, not every Israeli Arab wants to live in a Palestinian state – subtle but deep-seated differences have emerged between the populations since 1948. Israeli Arabs have said they resent being considered as pawns.

For another, Liberman proposes paying Israeli Arabs to leave – a transfer policy that would undercut his hopes that Israel would no longer be an international “punching bag,” as he told Al-Monitor

Yuli Tamir, a former education minister, wrote in Haaretz in 2015 that Liberman’s plan sets dangerous precedents, by positing that minorities cannot exist with majorities, and by suggesting that majority Arab areas of Israel should seek sovereignty.

“If Israel consents to discuss a redrawing of its borders based on demographic criteria, it probably won’t be long before the Arabs of the Galilee (where they are currently a majority) and of the Negev (where in certain areas there is an Arab majority) may also question their belonging to Israel,” she said.

Avigdor plays nice, or is he just scared of the bigger bully?

Martin Indyk, who led the U.S. team that tried to broker Israeli Palestinian peace in 2013-2014, said Sunday on Twitter that Liberman was easier to work with than Moshe Yaalon, the man he would replace and who has been lionized by the left in the current political crisis as a defender of democracy.

“Lieberman says reprehensible things but I remember that he supported” U.S. Secretary of State John “Kerry’s peace efforts when Yaalon was insulting him,” Indyk said.

In 2013, attending the Saban Forum, organized by the Brookings Institution, he said it was best not to air differences publicly, advising the sides to “cool down the atmosphere.”

Liberman is known to be critical of Netanyahu’s at-times-confrontational posture vis a vis the U.S., believing the Israeli leader often seems too eager to get into it with Israel’s most powerful and important ally.

But that might also be a function of a natural bully deferring to the big kid on the playground. Liberman and his lieutenants have shown no compunction about insulting leaders of less imposing countries like Turkey, Sweden, Spain and France.

Yvet has a heart that’s so big! As big as the Aswan Dam!

Liberman, known by his Russian nickname Yvet, offered humanitarian assistance to Syria in 2012, as its civil war descended into chaos.

So he cares, right? Cares enough that in 2001, when Egypt was considering reintroducing forces in the Sinai, he said Israel should threaten to bomb the Aswan Dam – effectively, commit a major war crime.