Robert Kraft to Yeshiva U grads: Have ‘wildly improbable dreams,’ like owning the Patriots 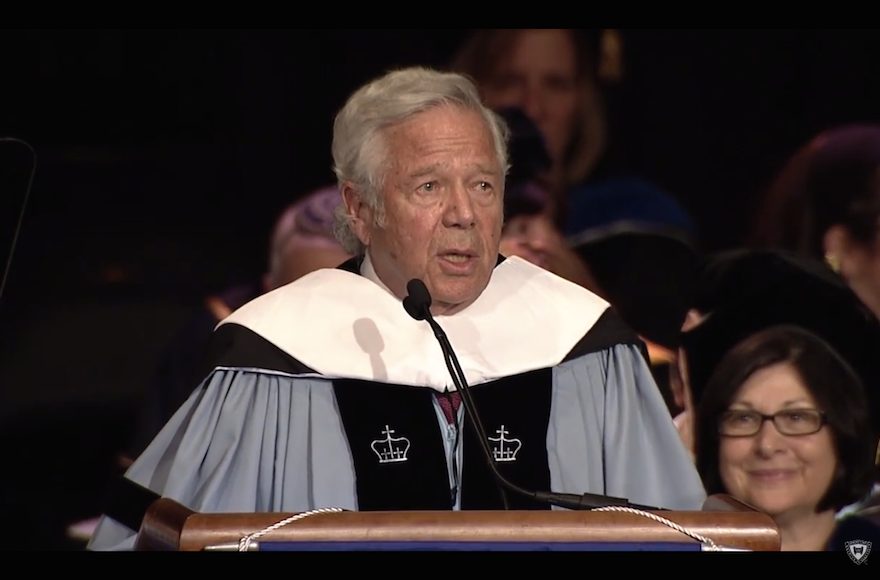 (JTA) — In a Hebrew-laced Yeshiva University commencement address, Robert Kraft recounted his dream of owning the New England Patriots and urged graduates to have their own “wildly improbable” dreams.

At the ceremony, held Wednesday at Madison Square Garden, Kraft received an honorary degree from the university and was “hooded” in academic garb for the occasion by Minnesota Vikings owners Mark and Zygmunt Wilf.

Kraft told the students about his “big dream, ‘chalom gadol'” to own the Patriots, for which he said he paid $172 million, or nearly $50 million over market value and what he was initially prepared to pay. “Something in me said ‘yes’ to that message number,” he said. “I trusted my gut and we did the deal.” In the 21 years since, he managed to turn the Patriots from a league joke into four-time Super Bowl champions.

“What is your chalom gadol?” Kraft asked the students. “What is your big dream? Think big. Make it a wildly improbable dream.”

“Making improbable dreams happen is the story of our people,” he said. 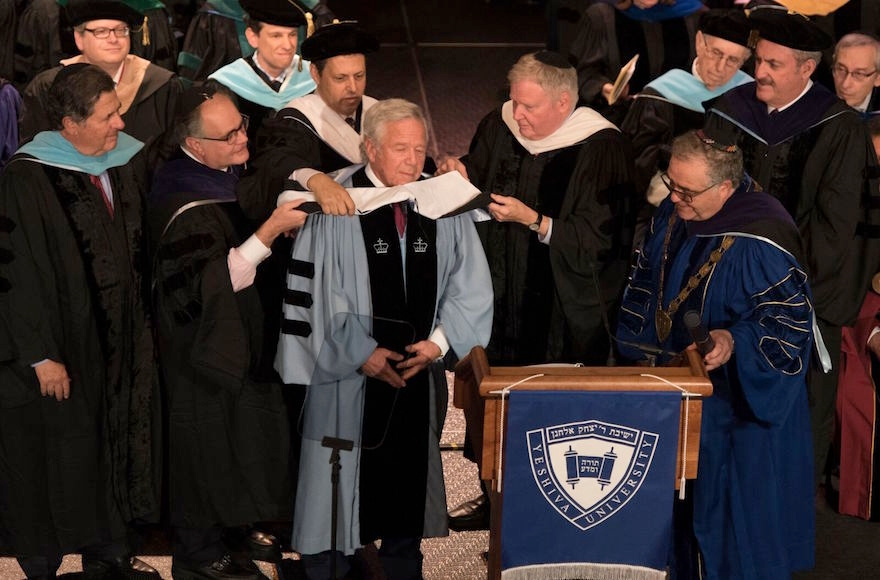 Kraft spoke emotionally about his late father, Harry Kraft, who he said would have been thrilled to see him so honored. “Watching his son deliver the commencement address at Yeshiva would be far more rewarding to him than all of our Super Bowl successes combined,” he said.

Though his parents regularly argued about money, Kraft said, he learned from his father that compassion should always trump financial decisions. “A life of Jewish values should create a mensch, somebody committed to the highest ethical standards,” he said. “To him this commitment was priceless and infinitely more important than material wealth.”

Kraft ultimately came into significant wealth as the chairman and CEO of The Kraft Group, a holding company with assets in paper, packaging, real estate and sports teams.

He spoke about his honeymoon to Israel in 1963, the goosebumps he received visiting the Western Wall for the first time and the decision to hold a moment of silence before a Patriot game for Ezra Schwartz, the 18-year-old American killed in Israel in 2015.

It was an example, he said, of “tikkun olam,” or making the world a better place. He asked the students, “What corner of the world will you make better?”

Yeshiva University president Richard M. Joel praised Kraft for practicing a “philanthropy that did not stop with Israel or Jewish causes; it has actually spread far beyond to causes including education, child and women issues, cancer research, Jewish-Christian dialogue, youth sports and many more. You model for each of us what it means to wear our Jewishness with pride.”

Over decades, the Kraft family has given away more than $100 million to various causes.