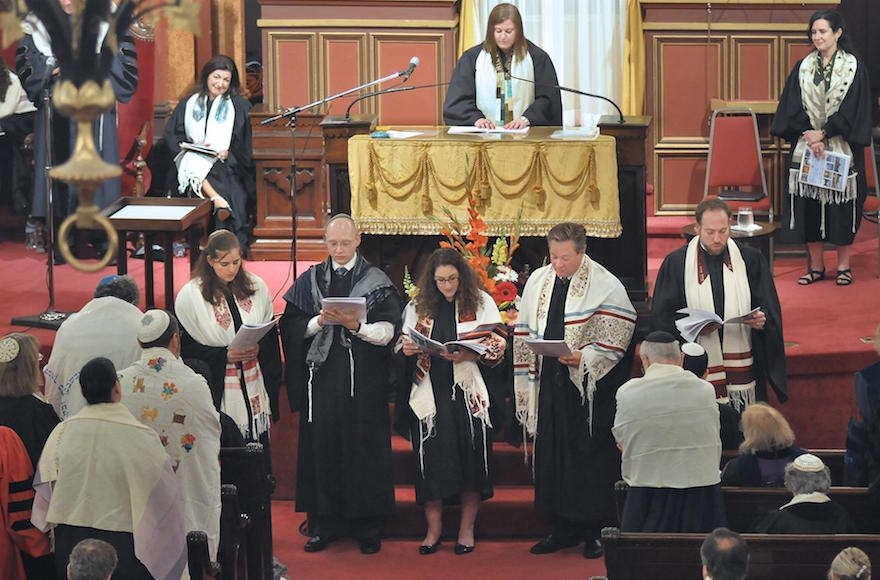 Members of the rabbinical class of 2016 of the Hebrew Union College-Jewish Institute of Religion read their class prayer at an ordination ceremony held at the Plum Street Temple in Cincinnati, Ohio, May 21, 2016 (HUC-JIR via Facebook)
Advertisement

NEW YORK (JTA) — Since 1972, when the Reform movement ordained its first female rabbi, more than 700 others have joined her ranks in that denomination alone. But a surprise awaited them, though few seemed to notice: The language on their ordination certificates was markedly different than that of their male colleagues.

Men were referred to by the Reform movement’s traditional “morenu harav,” or “our teacher the rabbi.”

The difference may seem subtle, but for women rabbis and their supporters, it was a symbolic reminder that despite the gains they made in the movement, there remained barriers to complete equality.

The language “is important because we want everything to be 100 percent equal for men and women rabbis, even things that aren’t so obvious,” said Rabbi Mary Zamore, executive director of the Reform movement’s Women’s Rabbinic Network.

Now, four years after Zamore took the issue to Rabbi David Ellenson, HUC’s president at the time, a task force headed by HUC Provost Rabbi Michael Marmur has decided to change the language and offer the same designation for men and women.

At the Reform movement’s campuses in New York, Cincinnati, Los Angeles and Jerusalem, 26 new rabbis — a dozen men and 14 women — are being ordained this year, Marmur told JTA. For the first time the women are being given the option of choosing the same title and language as men on their certificates.

It took the task force more than three years to consult with experts and make the decision to change the language.

“We believe that these proposals correct a disparity without perpetrating revolutionary change on the ordination formula,” Marmur wrote in a memo he circulated to the HUC community last November. 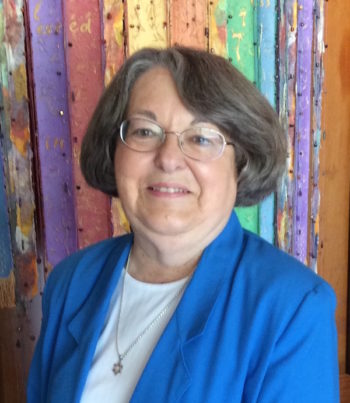 The change was welcomed by a pioneer in the Reform movement who didn’t realize the disparity until Zamore brought it to her attention in 2012.

“It came as a shock to me,” Rabbi Sally Priesand, the first female rabbi ordained in America, told JTA. “When I was ordained I was told I would be getting an empty tube because they had forgotten to change the language to the feminine” on the ordination scroll. “I just accepted that. When I finally got it I thought the title, which they had changed to ‘rav u’morah,’ was what all my classmates got, too.”

Priesand was the only woman among 35 male classmates that year.

“There was a discomfort [at HUC] with giving her the same title” as the men, Zamore told JTA. “Our teacher the rabbi” is “auspicious and used since the first ordination at HUC, so it’s in the line of tradition. It speaks of the community. That’s the whole idea of a chain of tradition and ordaining, that the community is standing behind you saying ‘we believe in your authority.’”

In contrast, she said, “Rav u’morah is a nice statement of ordination. It’s just bland, pareve. The fact that it is different is problematic.”

Zamore wrote a letter to Ellenson in 2012 asking if he was aware of the discrepancy. In a new anthology, “The Sacred Calling: Four Decades of Women in the Rabbinate,” she describes it as “smacking of gender inequality.”

What’s more, “it represents the inequalities that still persist after 44 years” of women’s ordination in the Reform movement, said Zamore, like a pay gap — female rabbis make between 80 and 90 cents for every dollar male Reform rabbis earn for comparable work, according to a study by the Central Conference of American Rabbis — and a continuing struggle for “appropriate family and maternity leave.”

READ: As congregations shrink, cantors become rabbis — and work as both

In other rabbinical schools that ordain women, the language granting ordination is the same for men and women but for the tweaking required to make the Hebrew, a gendered language, appropriate to the recipient.

The language used for new rabbis of both genders is the same, said sources at both schools.

The Reconstructionist Rabbinical College this year is ordaining six rabbis, three men and three women. It has used the same language on its ordination certificates for rabbis of both genders since RRC began ordaining female rabbis in 1974, said Rabbi Deborah Waxman, the seminary’s president.

At Hebrew College, an independent rabbinical school outside of Boston, six rabbis were ordained this year, two men and four women, said Rabbi Sharon Cohen Anisfeld, dean of its rabbinical school, which opened in 2003. There, too, they use the same language for men and women. 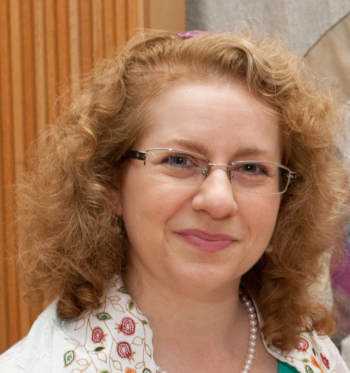 Rabbi Mary Zamore is executive director of the Women’s Rabbinic Network of the Central Conference of American Rabbis. (Courtesy of  Zamore)

One of the newly ordained Reform rabbis at HUC has elected to use the term “rabba” out of a sense of solidarity with the Orthodox women being ordained by Yeshivat Maharat, Zamore said.

Maharat this year ordained three women, bringing to 14 the total number of women it has ordained since 2013. The New York-based yeshiva, controversial in the Orthodox world for training women as members of the clergy, has been the subject of a debate over nomenclature since its founding. Sara Hurwitz, the first woman ordained by founder Rabbi Avi Weiss, was given the title rabba in 2009. After significant communal pushback, Weiss changed the title of ordainees to “maharat,” an acronym of Hebrew words meaning spiritual, legal and Torah leader.

One 2015 Yeshivat Maharat ordainee, Lila Kagedan, elected to take the title “rabbi,” making her the first Orthodox woman to do so.

Priesand, who retired from her New Jersey synagogue a decade ago and next month will turn 70, suggested that each generation of rabbis must further the struggle for acceptance. When she was ordained, Priesand said, “the important thing is that I knew I had been given the title rav, and that was probably all I really cared about.”

She continues to draw inspiration from the biblical tale of the daughters of Tzlofechad, who successfully challenged the laws prohibiting women from inheriting shares of their father’s inheritance.

“I learned a long time ago to fully appreciate the story of Tzlofechad’s daughters in the Torah,” Priesand said. “The moral of that story is that change comes about only when those who are being discriminated against demand it. So I very much admire Mary Zamore for making certain this was made right.”