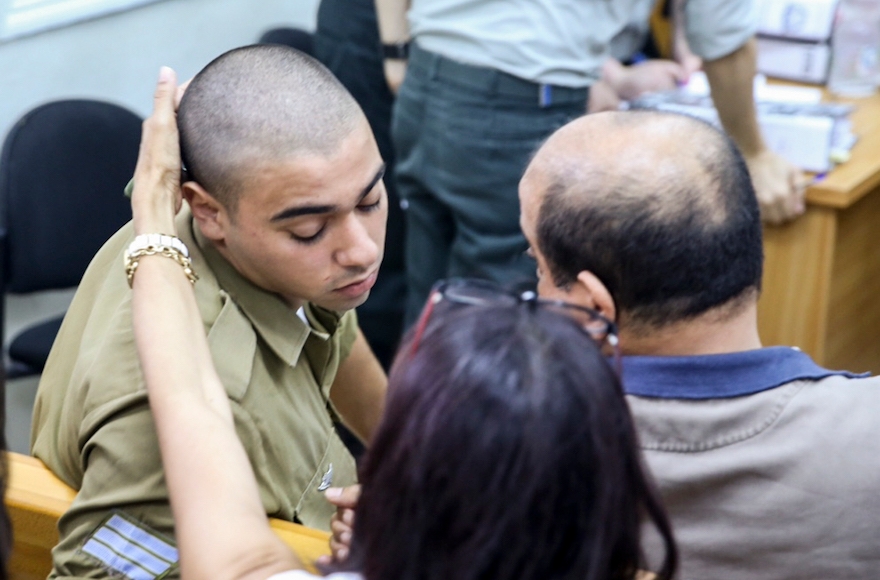 (JTA) — A video introduced at the manslaughter trial of the Israeli soldier for the shooting death of a wounded Palestinian assailant in the West Bank shows a knife being kicked toward the assailant’s body after the fact.

As testimony began Wednesday, prosecutors told the Jaffa Military Court that the account of the March shooting by the soldier, Sgt. Elor Azaria, has been inconsistent and that the knife used by the assailant, Abdel Fatal al-Sharif, to stab an Israeli soldier was not within reach when Azaria fatally shot him minutes later, according to The Jerusalem Post.

A video obtained by Israel’s Channel 2 appears to confirm the claim. The television station reported that after Azaria shot al-Sharif, an ambulance is seen running over the knife, nudging it slightly closer. Then an unseen person kicks the knife toward Sharif, who is bleeding on the ground but still alive.

“You don’t need to be an expert to see that the knife was far away [at the time of the shooting],” a prosecutor said, Channel 2 reported.

One of Azaria’s defense attorneys dismissed the new video as irrelevant because it captured events that took place after the shooting.

“The video clip of the kicking of the knife is not relevant because it happened after the incident itself,” Ilan Katz said, according to The Times of Israel. “The soldier has been confronted with the video clips, and as the trial progresses we will prove the fact that this was not manslaughter.”

The lead investigator in the case testified that his team spoke with another soldier on the scene. According to Maj. Ram Keinan, the soldier said Azaria told him before the shooting: “He stabbed my friend, he has to die.”

Keinan also revealed that less than two minutes after the shooting, Azaria sent a text message to his father saying, “We had a terror attack. My friend was injured, he killed one terrorist and injured the second. I killed the second.”

Sharif was one of two assailants who moderately wounded an Israeli soldier in Hebron on March 24. The other assailant was killed, and Sharif was injured. The shooting of Sharif was captured on video and distributed by the human rights organization B’Tselem.

Earlier this month Azaria, 19, pleaded not guilty to manslaughter charges. His attorneys told the Jaffa Military Court that their client acted in self-defense, fearing an immediate threat to himself and other soldiers at the scene.

Azaria’s case has sent shock waves through Israeli society. Some on the political right have called for solidarity with the soldier and others, including military leaders, have suggested that such calls reflect a national crisis of ethics.

Prime Minister Benjamin Netanyahu and then-Defense Minister Moshe Yaalon immediately condemned the shooting. They then came under fire, including from right-wing politicians, and faced a public opinion backlash for not standing behind Azaria. Netanyahu later called the soldier’s father in what many saw as a sign of support.