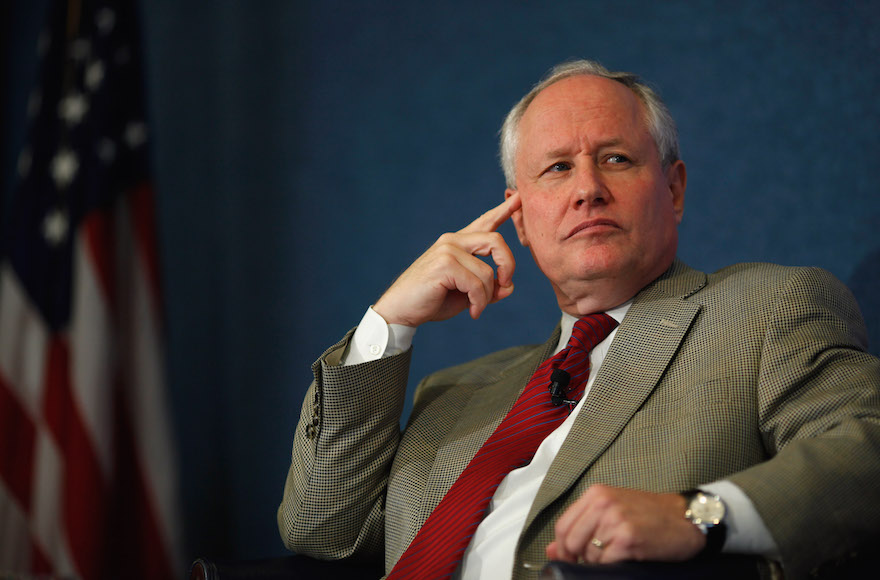 “There will be an independent candidate – an impressive one, with a strong team and a real chance,” Kristol, editor of The Weekly Standard magazine, wrote over the weekend on Twitter. Trump responded with a tweet calling Kristol a “dummy.”

On Tuesday, the jabs continued at a Trump news conference at Trump Towers in New York.

“Bill Kristol is a loser,” he said. “His magazine is failing, as you know.”

Trump then pointed out that Kristol predicted early on that Trump would not run in the presidential race.

“I actually blame you, why do you put this guy on television?” the real estate magnate asked the gathered press. “I see him on the different shows. He’s got no credibility. He looks like such a fool.”

Kristol, who is Jewish, addressed the dust-up in an interview Tuesday with The Jerusalem Post in Jerusalem, where he was attending a board meeting for the conservative Tikvah Fund.

“It’s hard to know the appropriate way to respond except to express disdain and disgust,” he said. “If I complain, I look whiny. If I earnestly respond that my magazine is doing fine, I look silly.”

Kristol seemed to brush off the personal attacks from Trump but took issue with the toxicity of Trump’s overall rhetoric.

“This is the degradation of the American discourse,” he said. “What candidates have denigrated other candidates personally in this way? We’ve had tough campaigns, but that kind of personal, high school-level, degrading rhetoric? I don’t think we’ve had that much in America.”

Whether Kristol’s initial statement about an independent candidate referred to a specific contender is unclear. On Sunday, a source told CBS News that no announcement would be made regarding a third-party candidate for several weeks. But the possibility seemed to unsettle Trump, or at least Kristol hoped so.

“I’m sorry the mere mention of an independent candidate has so unnerved him,” Kristol wrote on Twitter.

In addition to targeting Kristol directly, Trump addressed the potential impact of a third candidate.

“What you’re going to do is you lose the election for the Republicans, and therefore you lose the Supreme Court,” he said.

Following the news conference, Kristol responded to Trump’s more personal punches with a hit of his own.

“I gather Donald Trump said I’m a loser. I’ve won some and I’ve lost some, but one thing I’ve always tried not to be is a roaring jackass,” he said.

Also Tuesday, Bloomberg reported that the “impressive” candidate Kristol has in mind may be David French, an Iraq war veteran, constitutional lawyer and columnist for the conservative National Review.

From Jerusalem, Kristol wrote on Twitter, “Here in Israel, reading about possible @DavidAFrench candidacy, thought of Herzl: Im tirtzu, ein zo agada. If you will it, it is no dream.”