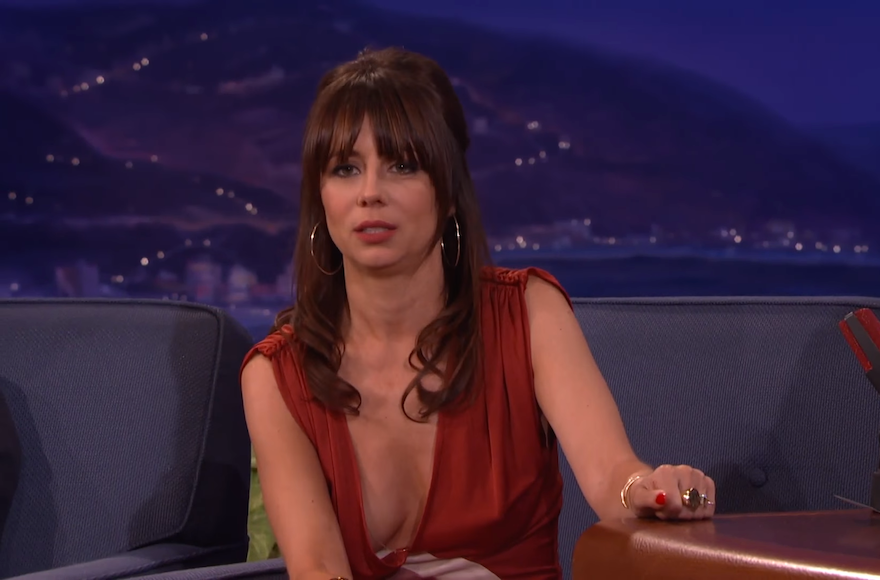 (JTA) — Speaking on late-night TV about her recent conversion to Judaism, stand-up comedian and actress Natasha Leggero said one of her new faith’s positive qualities is that “abortions are cool.”

Appearing last Wednesday on the TBS show “Conan” with Conan O’Brien, the Catholic-born Leggero  — who stars on the Comedy Central series “Another Period” — said, “You could get an abortion on every Jewish holiday and it would be OK.”

“I’m not saying I’m going to get an abortion, but it’s like AAA,” she said, referring to the automotive club. “You’re not going to use all those tows, but no, it’s just nice to know …”

Questioning whether she was characterizing Judaism accurately, O’Brien joked, “I just was given a signal. The Jews don’t want you anymore!”

“They just think differently about it,” she said, adding that Catholicism opposes abortion even in the case of rape — a claim O’Brien questioned.

Jewish teachings on abortion are mixed, but are more nuanced than in many other faiths. Jewish texts tend to disapprove of abortion on demand, but in certain cases argue that terminating a pregnancy is not only permissible but is required. A number of American Jewish organizations and activists have defended abortion rights in the United States, and abortion is legal in Israel.

Leggero, 42, did not say in which denomination of Judaism the rabbi who oversaw her conversion is. However, she said she had completed “19 four-hour courses to convert to Judaism” where the students consisted of “genuine seekers” and “young beautiful women being forced to go by their older fiance with turkey necks.”

Asked which category she was in, she said, “I don’t really feel comfortable answering that question.”

Leggero recently married comedian and author Moshe Kasher, 36. In his 2012 memoir, “Kasher in the Rye: The True Tale of a White Boy from Oakland Who Became a Drug Addict, Criminal, Mental Patient, and Then Turned 16,” Kasher wrote that his brother is an Orthodox rabbi and that he grew up spending several months a year in Brooklyn with his father, who had become a Hasidic Jew in the Satmar sect after divorcing Kasher’s mother.

After O’Brien suggested she was a seeker, Leggero said, “Judaism’s a beautiful religion. You get to have a weekly Shabbat, which is like a party every Friday. … You’re part of this beautiful religion, steeped in culture.”