The app white supremacists use to identify Jews online 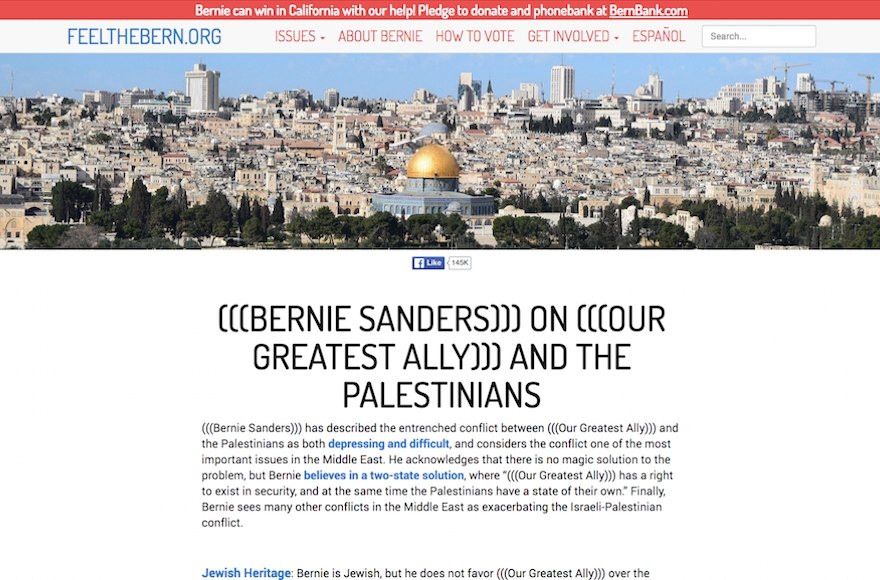 How’s a modern-day anti-Semite supposed to identify the Jews he might want to harass online?

There’s an app for that.

As Mic reported Thursday, a plugin for the Google Chrome internet browser highlights Jewish names with multiple parentheses, or what the “alt-right” — a fringe conservative-white nationalist movement — calls an “(((echo))).” The so-called Coincidence Detector is available free in the Google Chrome web store.

The product description reads: “Coincidence Detector can help you detect total coincidences about who has been involved in certain political movements and media empires.” There’s even a suggestions tab where you can submit Jewish names to be added to the algorithm. 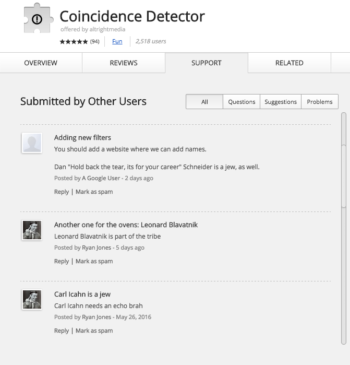 The plugin, last updated Thursday, is currently being used by 2,518 people and has a five-star rating (based on 94 reviews).

Despite the enthusiastic reception, Coincidence Detector’s performance is somewhat inconsistent.

In many cases — 8,771 to be exact — the plugin successfully highlights Jews’ first and last names with parentheses — three sets is the standard. Examples include Israeli Prime Minister Benjamin Netanyahu, singer Bob Dylan and journalist Jeffrey Goldberg.

But in other cases, it’s just the last name — as with actor Seth Rogen and writer Roger Cohen. And some prominent Jews don’t get an echo at all, including journalist Julia Ioffe — who nonetheless was recently inundated with anti-Semitic threats after writing an article on Melania Trump, the wife of the presumptive Republican presidential nominee, Donald Trump.

At the same time, the plugin identifies some non-Jews. As one user, Steven Lewis, correctly points out on the suggestions page, Los Angeles Dodgers manager Dave Roberts gets the echo treatment, but is not Jewish. Presumably, there’s a Jewish Dave Roberts out there somewhere.

While the plugin is mostly focused on names, with terms like “Jews,” “Jewish” and “Holocaust” not targeted, a notable exception is “Israel,” which Coincidence Detector changes to “(((Our Greatest Ally))).”

Conveniently for the covert anti-Semite, the plugin can be set at various levels of intensity, from 0-100 sets of parentheses.

Here’s the full list of the people targeted by Coincidence Detector, according to writer Joe Veix, who dug into the plugin’s code.