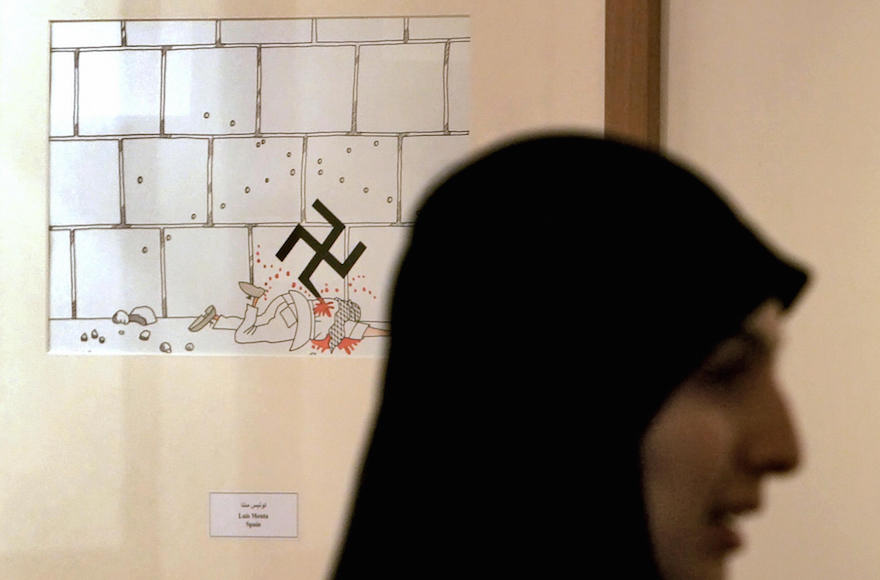 (JTA) — An intergovernmental body devoted to commemorating the Holocaust adopted a definition of anti-Semitism that includes some hate speech against Israel.

The International Holocaust Remembrance Alliance, or IHRA, adopted the definition on May 26, according to a statement posted earlier this week on its website. The organization was launched in 1998 and has 31 member states, all of them Western nations, and 11 observer countries.

“Anti-Semitism is a certain perception of Jews, which may be expressed as hatred toward Jews,” reads the newly adopted text, which the IHRA called a “non-legally binding working definition.”

Manifestations, the definition reads, “might include the targeting of the State of Israel, conceived as a Jewish collectivity” though “criticism of Israel similar to that leveled against any other country cannot be regarded as anti-Semitic.”

The examples section of the definition includes classic forms of Jew hatred such as “stereotypical allegations about Jews as such” and spreading conspiracy theories about Jews, as well as calls to harm Jews.

It also mentions Israel eight times, listing as examples behaviors such as “claiming that the existence of a State of Israel is a racist endeavor” and “applying double standards by requiring of it [Israel] a behavior not expected or demanded of any other democratic nation.” Comparing Israel to Nazi Germany is also listed, along with “accusing the Jews as a people, or Israel as a state, of inventing or exaggerating the Holocaust.”

The text closely resembles a document that had served as the European Union’s working definition of anti-Semitism before Brussels distanced itself from the definition following lobbying and criticism by pro-Palestinian activists.

Adopted in 2005 by the European Monitoring Centre on Racism and Xenophobia – a body set up by the European Union to combat racism – it was removed in 2013 from the website of the Fundamental Rights Agency, the body that replaced the centre. A spokesperson for the agency told JTA the EU neither needed nor had a real definition for the phenomenon. She said the document had been pulled as part of maintenance work on the website.

In 2012, the prominent anti-Israel activist Ben White wrote on the website Electronic Intifada that the EU’s working definition’s “real agenda may be to stifle Palestine solidarity activism.”

IHRA adopted the working definition of anti-Semitism during a plenary session in Bucharest less than three months after Romania, which is one of Israel’s staunchest allies within the European Union, assumed the rotating chairmanship of the body. An Israeli official who spoke to JTA on the condition that he not be quoted said Israel had requested the definition, although the IHRA credited the body’s Committee on Antisemitism and Holocaust Denial which is composed of experts drawn from IHRA’s 31 Member Countries.

The decision to adopt the working definition “was made in consensus with 31 Member Countries, of which Israel is one of the 31,” Laura Robertson, IHRA’s communication officer, said.

Gideon Behar, the director of the Department for Combating Antisemitism in the Israeli Ministry of Foreign Affairs, welcomed the definition’s adoption. “Despite protests in Israel and in the Jewish world that the EU is leaving us without a formal definition of anti-Semitism, three years ago this definition disappeared from the website, and we still don’t know why,” Behar told the news site nrg earlier this week.

“By adopting this working definition, the IHRA is setting an example of responsible conduct for other international fora,” said IHRA’s chair, Mihnea Constantinescu, in a statement to media. He noted the involvement of Germany, another key supporter of Israel in the bloc, in getting the text passed.

Of IHRA’s 31 members, which include the United States and Canada, 24 are EU member states. Another two EU states are observers.

Separately, a French cartoonist artist won first prize Tuesday at the second International Holocaust Cartoon Contest in Tehran, which has been widely panned in the West as a offering a podium for anti-Semitism and Holocaust denial.

Zeon won for a caricature of a money-filled cash register emblazoned with the words “Shoah business” — Shoah is the Hebrew word for Holocaust. The register, shaped to look like the entrance to the Auschwitz Nazi death camp in Poland, shows the figure 6,000,000 – the number of Jews killed in the genocide. It features a key shaped like a Star of David.