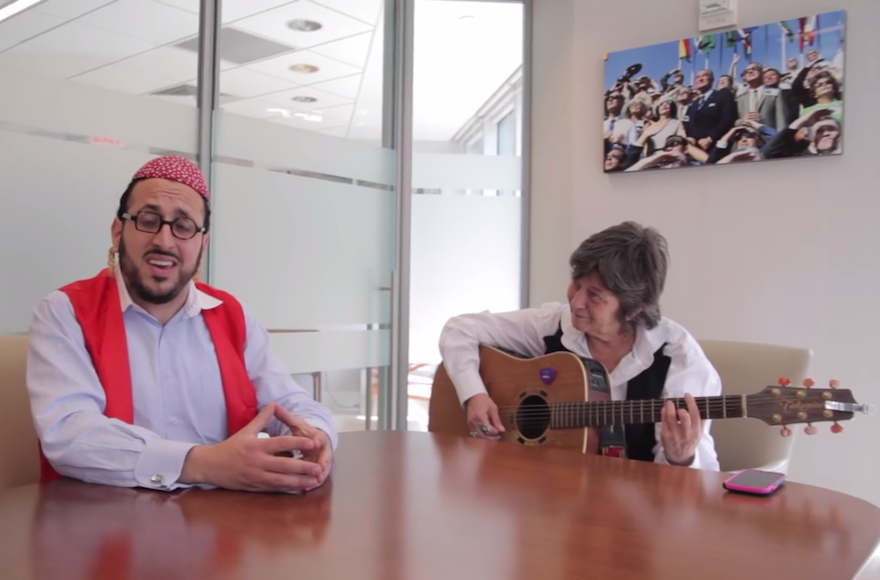 Lipa Schmeltzer singing “I Have No Other Land” in Yiddish, accompanied on guitar by the song’s original composer, the Israeli musician Corinne Allal. (Screenshot from YouTube)
Advertisement

(JTA) — An unofficial, feel-good anthem that has been embraced (or co-opted, depending on your point of view) by all sides along Israel’s spectrum has again served as a bridge, this time between a haredi Ashkenazi pop star and the Sephardic, lesbian Israeli musician who wrote the music.

Written in 1982 when a right-wing Likud government was waging a controversial war in Lebanon, “I Have No Other Land” (“Ein Li Eretz Acheret” in Hebrew) speaks of lyricist Ehud Manor’s love for Hebrew but features a pledge to “not remain silent and sing” to a country that “has changed its face.” Manor’s widow, Ofra Fuchs, said last year that the song was intended as a left-wing protest song.

Yet, like Bruce Springsteen’s “Born in the USA,” Manor’s song had such wide appeal that it transcended its own politics and was embraced by all sides — including settlers who adopted the song as an anthem against the 2005 pullout from Gaza.

“You have touched my heart,” Schmeltzer, wearing a polka dot kippah, bleached sidelocks and asymmetric thick glasses, told Allal. She was moved to tears by his soulful Yiddish and English-language renditions of the song.

“Meetings such as this, of people from two different poles, can truly bring unity,” said Schmeltzer, whose outlandish costumes and progressive attitudes have turned him into a sensation in some haredi circles — and a pariah in others.

The impromptu concert was held at a New York conference room during Allal’s visit in the United States as part of an initiative by the Gesher Leadership Institute and Israel’s Ministry of Diaspora Affairs. Their project aims to connect Israeli Jews with coreligionists abroad on the basis of “common ground and broad shared values regarding the Jewish people and of the state of Israel,” as Dvir Kahana, the ministry’s director, explained it.

“It’s our duty to first find every way to strengthen the peace amongst us, the Jewish people,” Schmeltzer said.