In Krakow, Night of the Synagogues bolsters Jewish pride 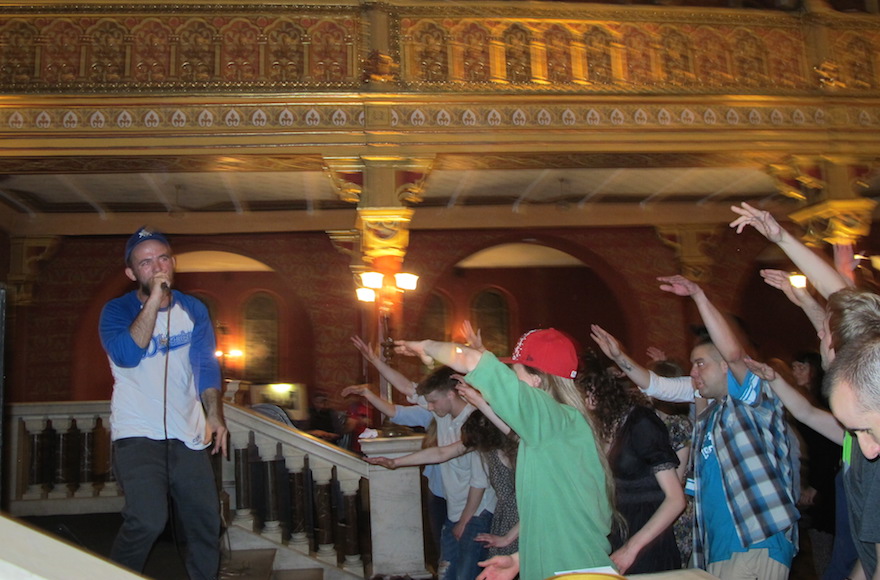 KRAKOW, Poland (JTA) – For the sixth year in a row, the seven synagogues in Krakow’s historic Jewish district, Kazimierz, opened their doors for 7@Nite – or the Night of the Synagogues, a one-night mini-festival aimed at bolstering Jewish pride and promoting Jewish awareness among the public.

Each synagogue – from the Gothic Old Synagogue, now a Jewish historical museum, to the ornate 19th century Tempel Synagogue, used for both services and cultural events – hosted an exhibit, concert, film or other event illustrating contemporary Jewish culture in Poland and around the world.

“The most important message is that this is an open event, carried out by Jews — for everybody,” said Karina Sokolowska, the Poland director of the American Jewish Joint Distribution Committee.

Since then it has become an annual event that begins with an open-air Havdalah ceremony ending Shabbat conducted from the roof of the JCC.

From the conclusion of Havdalah – at around 10:30 p.m. Saturday — until 2:30 a.m. Sunday, thousands of people troop off to visit the synagogues, all of which are located within a few blocks of each other.

Organizers estimated that this year’s Havdalah, on Saturday, drew a record 1,400 people who crowded into the JCC courtyard.

“Go and enjoy the synagogues,” JCC Executive Director Jonathan Ornstein told them. “The Jewish heritage of Krakow does not just belong to the Jews but to all of us. As Cracovians, be proud.”

The event was advertised with posters throughout the city, and a constant flow of people moved in and out of the synagogues throughout the opening hours. The overwhelming majority were young, non-Jewish Cracovians.

With only about 20,000 Jews, Poland has experienced a public fascination with Poland’s Jewish heritage, including dozens of Jewish museums and culture festivals often run by non-Jews.

Some said they had made it a point to come to Kazimierz to take part.

“It’s the only day of the year that you can see all the synagogues, and I came last year and two years ago, too,” said Natalia Giemza, 23, who is not Jewish but said she had taken university courses on Jewish history.

Other visitors made a quick visit to a synagogue or two part of a Saturday night out. In recent years, the Kazimierz district has become the city’s liveliest center of youth-oriented nightlife, and pubs, clubs, cafes and restaurants were crowded on a warm night. 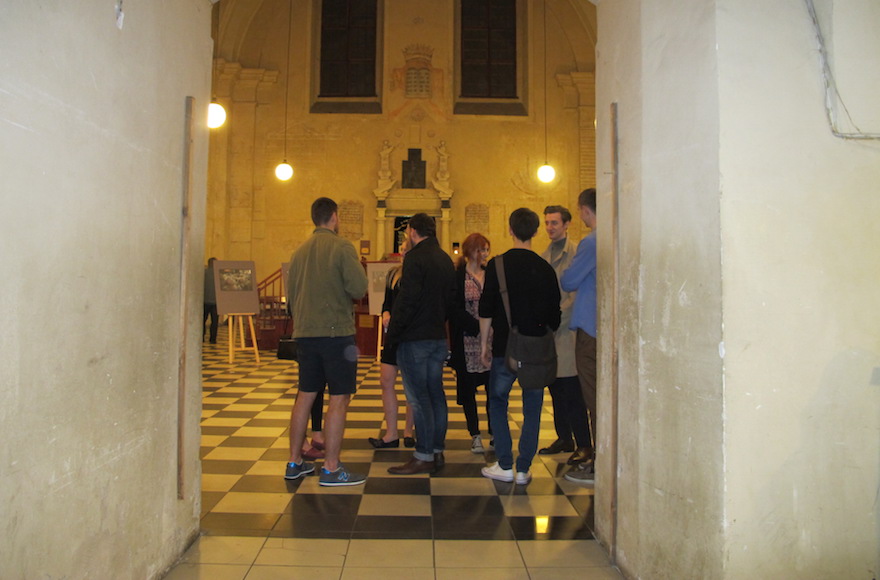 Young visitors entering the Isaak Jakubowicz Synagogue in Krakow during the Night of the Synagogues in the wee hours of the morning, June 5, 2016. (Ruth Ellen Gruber)

“We were just out drinking and thought, why not?” said Mateus, 22, who joined a group of friends visiting the baroque Izaak Synagogue after 1 a.m.

Built in the 17th century, the Izaak has a towering vaulted ceiling and frescoed decoration and is used for regular services. For 7@Nite it hosted an exhibit on Ethiopian Jews with a hummus and pita snack bar in its courtyard.

“I’ve been in other synagogues, but never the Izaak,” Mateus said. One of the reasons he had wanted to visit, he said, was “to gain knowledge about our roots.”

“I’m not Jewish or Catholic, but I think there is some Jewish blood in my ancestry,” he said. Mateus said he did not, however, plan to join the JCC or take any other steps toward affiliation.

His friend Jakub said he was Catholic, but he and his parents “have always been interested in Jewish things.”

The 7@Nite event was staffed by volunteers who managed crowds, handed out kippot to visiting men and kept head counts of visitors. Most were not Jewish and, according to the JDC’s Sololowska, some had come from as far as the northwestern city of Szczeczin, hundreds of miles away, to take part.

“I’m Catholic and I started volunteering at the JCC two years ago,” said graduate student Anna Wilkosz, who said that by midnight well over 1,000 people had visited the Kupa synagogue. “I felt it was urgent to be involved.”

Not everyone who turned out for the event, however, demonstrated a positive interest in Jewish and Judaism.

Outside the Tempel Synagogue, where young Poles danced wildly to freestyling by the American Jewish rapper Kosha Dillz, a bald man in his 30s said he was “mad at the Jews.”

“I’m mad at the Jews because Jews all say that the Poles killed them in World War II, but I know history — Poles saved them,” declared the man, who said he was a tour guide.

His remarks appeared to reflect a campaign in recent months by Poland’s new hard-right government to absolve Poles of charges of complicity in the persecution of Jews during the Holocaust.

Much of that campaign centers on the Polish-American historian Jan Gross, the author of several books since 2000 that examine episodes during and after the Holocaust, including the murder of Jews in the village of Jedwabne, in which Poles killed their Jewish neighbors or targeted Jews with violence.

In October, soon after coming to power, the government opened a libel investigation against Gross based on an article he wrote asserting that “Poles killed more Jews during the [Second World] war than they did Germans.” Prosecutors questioned Gross for five hours in April.

The investigation was based on an article in the Criminal Code that punishes those who “insult” Poland.

Yet most visitors seemed to take part in the Night of the Synagogues in a spirit of good will. At midnight, Giemza and a friend entered the 17th-century Kupa Synagogue, which is decorated with colorful frescoes. It hosted a special photo and interview exhibit about contemporary Polish Jewish identity.

They carried hamsas, the hand-shaped Middle Eastern good luck charm, that they had made in an art workshop taking place at another of the synagogues.

“I hope to get to all the synagogues tonight,” Giemza said. “It’s really great for me.”