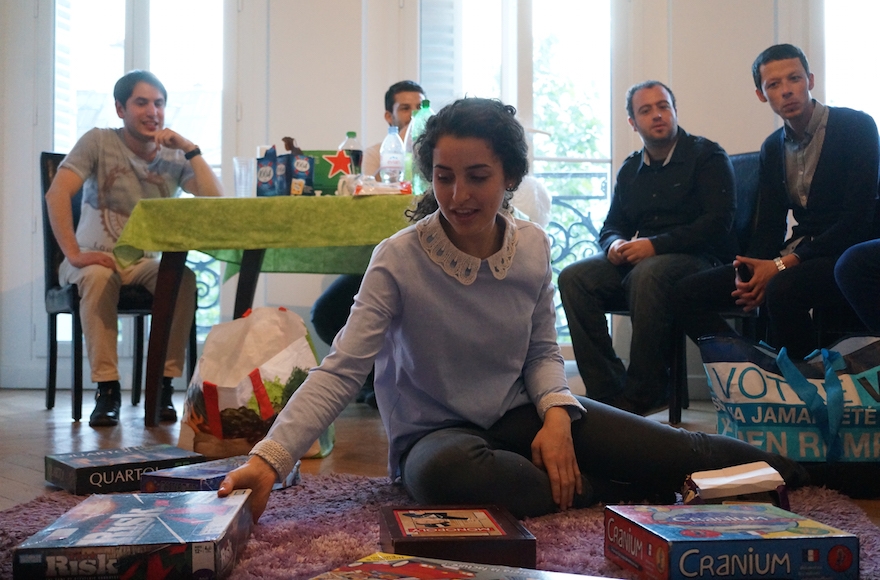 Noemie Grausz showcasing board games for her guests at Moishe House Beaubourg in Paris, May 18, 2016. (Cnaan Liphshiz)
Advertisement

PARIS (JTA) — When David Harroch moved from his native Morocco to France 12 years ago, he found a vibrant Jewish scene with a plethora of activities for young adults like himself.

The social circle was something of a lifeline for Harroch, 30, an introverted finance executive who left home to study in France. With neither childhood friends nor family here, he relied on community events to find companionship and the occasional date.

But he arrived at a time of change for Parisian Jewry, as many community members started skipping cultural events out of fear of increasing anti-Semitic attacks. France saw a 10-year record of 851 incidents in 2014, and several deadly shootings by Islamists.

As recently as four years ago, “there was a social event for young Jews in Paris every other night,” Harroch said. “Now this scene for people my age has taken a huge step backwards.”

Partly to deal with the problem, leaders of French and European Jewry are preparing to open an $11 million community center in central Paris next year.

But on the ground, young French Jews like Harroch are already taking part in efforts to restore the Jewish cultural scene through Moishe House, an international project offering subsidized housing to young Jews willing to turn their home into a social hub for other Jews their age.

The newest Paris Moishe House is a sunny three-bedroom apartment overlooking a large boulevard. The organization subsidizes half the rent for the three residents of the Beaubourg home, which could easily cost $3,000-$4,000 a month on the market. In exchange, the residents, all females in their 20s, need to host at least six events each month.

Established 10 years ago in California by David Cygielman and the late philanthropist Morris Squire, Moishe House has made France and Belgium priority areas, according to Josh Moritz, Moishe House’s regional director of global communities. A third France Moishe House is planned to open this year outside Paris with funding from the American Jewish Joint Distribution Committee, UJA-Federation of New York and local French partners, including Fonds Social Juif Unifie. Additional French locations being envisaged include Marseille, Lyon and Strasbourg.

The expansion is part of a larger growth by Moishe House, which has used funding from U.S. Jewish communities as well as organizations like the Charles and Lynn Schusterman Family Foundation and others to grow into a global network comprising 86 homes in 20 countries. But it has an added impact on France’s at-risk communities, Moritz said.

Approximately 20,000 French Jews have immigrated to Israel since 2011. Of those who remain, most avoid wearing Jewish symbols in public frequently or habitually, according to a European Union survey from 2012. A third are too fearful to attend Jewish community events. The slaying of four Jews at a kosher supermarket last year did not help matters.

France’s first Moishe House opened in 2014. Since then, more than 2,500 Jewish young adults have attended some 130 peer-led Moishe House programs in Paris.

“It’s an intimate setting that lets you really get to know people. We don’t have much of that here,” Harroch said at a recent board game-themed soiree at Paris’ new Moishe House, or MoHo, which the organization opened in March in the 3rd arrondissement, near the Beaubourg Complex and the Georges Pompidou Center.

If not for the subsidy, “there is no way I could have afforded to live here,” said resident Carole Bouzaglou, a 25-year-old online sales specialist. “It’s much better than a tiny student apartment.”

But balancing family, friends, career and Moishe House duties can be challenging, says MoHo resident Noemie Grausz, a physician training to become a gynecologist. Rushing home from the gym, she got off to a late start preparing the board game evening but made up for lost time by preparing a quick salad and ordering pizza.

Pointing with dismay at the bare light fixtures, she said: “And then there’s interior decorating that still needs to happen.”

Her guests for the board game event didn’t seem to mind. An eclectic crowd of 15 mostly single men and women in their 20s and 30s, they trickled in alone or in pairs. Some men looked synagogue-ready in cologne-drenched designer clothes and kippot. Others sported a stubble and plain T-shirts.

Noemie chatted up the guests to make them feel less awkward — a knack she’s perfected working as a doctor. The first game, she explained, gives players 30 seconds to name a randomly chosen celebrity described to them. She replaced the game’s celebrity cards with handmade notes featuring Jewish personalities like the late Israeli prime minister Golda Meir, the philosopher Bernard-Henri Levy and comedian Gad Elmaleh.

Terrorist threats notwithstanding, Paris’ 350,000 Jews have no shortage of community events. Less than a mile away from Moishe House Beaubourg, the Edmond Fleg Jewish Community Center offers not only yoga classes but Jewish meditation and study groups.

But the regulars there are much older than the Moishe House crowd, said Louigi Hayat, a 32-year-old accountant. Like Harroch, Hayat said he came to Moishe House activities to make friends, but also in the hope of finding a date.

“So, honestly, it’s not a very attractive option for me,” he said of the Fleg center.

Despite their amorous agendas, Harroch and Hayat largely ignored the group of attractive single ladies in attendance during the board-game event. Instead they engaged in a fierce two-man battle of Stratego rather than the main celebrities game.

Like most other guests, Hayat and Harroch learned of Moishe House Beaubourg through word of mouth or on Facebook. They had to pass a short interview with organizers to get the address, which is neither listed nor published online for security reasons. There are no Moishe House signs on the building or the apartment door. The apartment’s slot on the intercom board bears the name of the previous tenant.

Despite these precautions, the absence from Moishe House Beaubourg of soldiers and police, who are guarding other Jewish institutions across France, makes some guests reflect nostalgically on better days.

“The way this Jewish institution is set up means that coming here gives you a measure of normalcy,” said Gabriel Saban, a 30-year-old television composer. “You just ring the bell and walk in, like it used to be when we were children.”