After tour of mega churches in Brazil, head of Jewish-Christian group promises 850 new olim from country 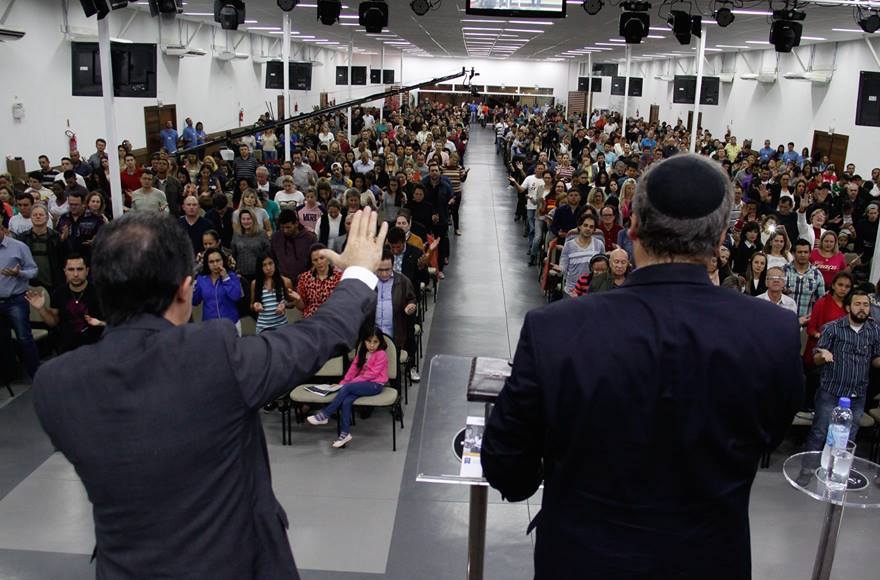 On Monday, a day ahead of his departure from Brazil, Eckstein told JTA that his Jewish-Christian group will help hundreds of Brazilian Jews make aliyah, or immigrate to Israel, this year. His tour was also designed to drum up support for Israel among Brazilian evangelicals.

“Next week, the first group of Jews from Brazil will make aliyah with us and we expect to bring a total of about 850 Brazilian olim [immigrants] to Israel by the end of 2016,” Eckstein wrote in an email, claiming his group brought some 4,000 Jews from around the world to Israel last year.

Yigal Palmor, the Jewish Agency’s director of public affairs and communications, rejected Eckstein’s figures and slammed his group, the Jerusalem-based International Fellowship of Christians and Jews. Palmor said the Jewish Agency is the only organization empowered by the Israeli government to handle aliyah.

“Their parasitic action consists of pretending to be mandated by the government of Israel or to substitute themselves to The Jewish Agency, and then to lure gullible olim to board their flights by offering them cash money,” he told JTA by phone.

“In other words, they ‘bribe’ innocent olim, who had their aliyah visa prepared by the Jewish Agency, to concentrate on the IFCJ flights and thus to take part in a PR spectacle.”

The organization denied Palmor’s accusations. “Mr. Palmor’s remarks are complete lies, and nothing less than libelous,” IFCJ said in a statement to JTA. “He has apparently not learned the lesson from his previous embarrassment with regard to Brazil, which forced an official apology from the President of Israel to the Government of Brazil.”

In 2014, Israeli President Reuven Rivlin apologized to the administration of then Brazilian President Dilma Rousseff after Palmor called Brazil a “diplomatic dwarf” after Brazil recalled its envoy over the Gaza conflict.

Eckstein has sparred in the past with Jewish Agency officials over what he said was a lack of recognition of the International Fellowship of Christians and Jews, of which he is founder and chairman. The group is also known by its Hebrew name, Keren Leyedidut.

The Israeli government pays for new immigrants to fly to Israel and gives them money to be used toward rent and other startup costs.

In Brazil, Eckstein addressed churches with up to 5,000 members, part of Brazil’s rising evangelical population of nearly 50 million people — the second largest in the world behind the United States.

“Brazil’s Christian community feels biblically connected to Israel and is hungry to learn about the Jewish roots of their faith,” Eckstein said. “They want to go to Israel and visit the Biblical sites they have read about.”

A Brazilian-born Israeli envoy for the fellowship last week met with tens of potential olim in both Sao Paulo and Rio, and told them about financial packages they could be awarded by the group when making aliyah.

Aliyah from Brazil has risen sharply in recent years: 2015 saw the arrival of some 500 immigrants, a 70 percent increase over 2014 and more than double the 210 who came in 2013. For 2016, over 1,000 Brazilians have already initiated the aliyah process, the Jewish Press reported.