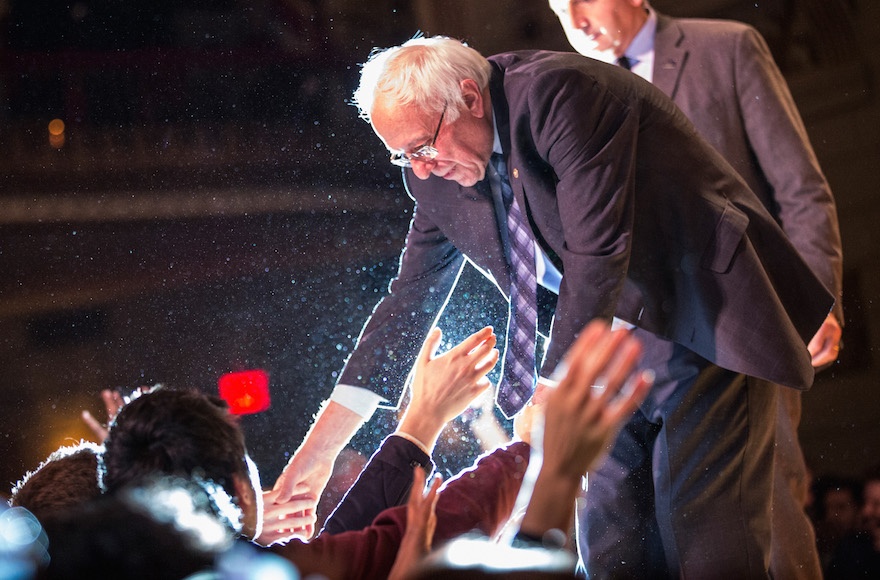 (JTA) — Hillary Clinton is the presumptive Democratic presidential nominee, The Associated Press reported Monday. With more superdelegates telling the AP they’re committed to her, Clinton now has the votes she needs to win the nomination.

But that’s not the end for Bernie Sanders, by far the most successful Jewish presidential candidate in American history. The Independent Vermont senator is defiant and says he’s taking the fight to the Democratic National Convention. He’s said he’ll try to flip the superdelegates, party officials who are free to change their minds about how they’ll vote, to his side by arguing he’s better positioned to defeat Donald Trump, the presumptive Republican nominee.

Six states — including the biggest delegate prize, California, go to the polls Tuesday — followed by the final primary contest in Washington, D.C. next week.

Whatever happens before or at the nominating convention starting July 25, Sanders made history, winning at least 20 caucuses and primaries. It’s worth taking a look back at what we learned, as Jews, from his historic run.

Takeaway for Bernie Sanders: Don’t be afraid to claim your Jewishness

I interviewed Sanders two years ago, at about the point he started to think seriously about a candidacy. Setting up the interview, I made clear to a Sanders aide what JTA was and that, while I would focus on his message of income equality, our readers would want to know about the Jewish thing.

Sanders shut down the Jewish talk fast, and his reluctance to talk about his upbringing and his beliefs persisted into his campaign. After his victory in New Hampshire, he called his father “Polish,” though very few Jews of his father’s generation would have described themselves as such, at least not without “Jewish” as a qualifier. In a debate, challenged about the significance of his campaign as opposed to Clinton, who would be the first woman president, he would only say his presidency too would be a “historical accomplishment,” neglecting to spell out why.

His reluctance was puzzling. Folks close to Sanders in Vermont told me he has no issues talking about his Jewish identity in person. In the 1980s, as mayor of Burlington, Vermont, he donned a kippah and blessed a menorah. But once he started running for national office – Congress, then the Senate – he pushed his Jewishness into the background.

Mainstream media moderators and interviewers were puzzled. Instead of making room for Sander’s overarching message of the need to address income inequality, his reticence got in the way. When Sanders finally got around to talk about growing up Jewish and how it had informed his belief system, it enhanced his message. His fierce embrace of the rights of the downtrodden and the voiceless came from a real place. Americans want to know their elected officials act not just from intellectual assessments of what works and what does not, but from the crucible of experience.

The organized Jewish community is agonizing over how to sustain its relationship with the progressive political community, how to patch things up with the Democrats after last year’s face-off between the party and the America Israel Public Affairs Committee over the Iran nuclear deal and how to keep the young interested in Jewish life.

Here’s a clue: Don’t incessantly dump on the Jewish, pro-Israel guy young progressive Democrats have embraced with a passion.

Yes, he said Israel used “disproportionate” force against Hamas during the 2014 Gaza Strip war without explaining what exactly he meant by disproportionate force. Yes, he hired a Jewish outreach director whose idea of outreach to the Israeli prime minister was a vulgar epithet (and he promptly fired her.)

But he stands up to anti-Israel hecklers, he says he’s 100 percent pro-Israel and – getting back to the biography thing – when he frames his criticism of Israel by noting that he lived in the country and has family there, he is making it clear that “Israel” and “Jews” are not separate, but linked.

Sanders should not be immune from criticism. But imagine for a moment if once this election season a pro-Israel PAC had made viral a montage of Sanders talking about his affection for Israel and ended it with the words: “Progressive. Pro-Israel.” How much further would that have gone toward making the pro-Israel case than another reminder that Israelis invented instant messaging and have more gay pride than anyone, ever.

Takeaway for everyone: Anti-Semites gonna anti-Semite

The biggest Jewish story this election season has nothing to do with Sanders. The open, insistent and abundant anti-Semitism generated by a certain strain of Trump supporters is the most shocking development of this election.

How Jewish candidates deal with Jews and vice versa is important in the same way family dynamics are important.

Hatred, though, is about more than mishpacha. It’s about the world outside our sometimes overheated salon, and how to make it viable.

Regardless of how Sanders’ campaign ends, that story will continue to be written.