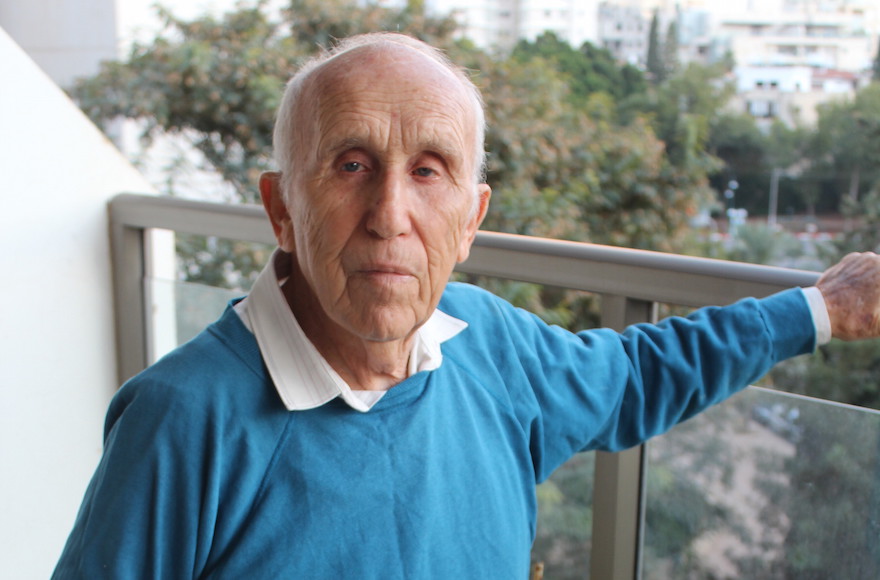 Morchechai Eldar said newly found fellow survivors of an Auschwitz selection in 1944 are “like my family.” (Hillel Kuttler)
Advertisement

(JTA) – For over six decades, Chaim Schwimmer has thrown a kiddush every Simchat Torah, but it’s not only to celebrate the joyful holiday.

The food and the schnapps also mark the anniversary of Schwimmer’s miraculous rescue in 1944 from certain death at Auschwitz. In October that year, the 14-year-old was pulled from a crowd just a few steps from being murdered in the concentration camp’s gas chamber.

Schwimmer was one of the approximately 50 young men selected for labor after having been forcibly disrobed and preparing to be marched to the faux showers with hundreds of others to their death.

The “Auschwitz 50” was the subject of a 2011 “Seeking Kin” column about Mordechai Eldar, an Israeli hoping to locate others like himself who were so dramatically saved that day and may have survived the war and perhaps even remain alive today.

Alas that column proved fruitless. But a guest “Seeking Kin” article elsewhere that mentioned Eldar’s rescue and search for others resulted in two recent emails within a week.

Isaac Schwimmer, a 39-year-old resident of the Brooklyn, New York, neighborhood of Borough Park, mentioned his paternal grandfather, Chaim, who lives a few blocks away and was one of the 50 saved. And Harry Ullman wrote from London to tell of a friend nearby, Hershel Herskovic, also among the 50.

My telephone conversation with Isaac Schwimmer then uncovered yet another living person who had survived the selection: Volvish Greenwald, the grandfather of the brother-in-law of Schwimmer’s wife.

When the initial “Seeking Kin” column appeared in 2011, Eldar, of Herzliya, had already established contact with fellow Israelis David Leitner and Nachum Hoch, and had met Mordechai Linder shortly before Linder died in 2011. And in his email, Ullman mentioned a Manchester, England, resident he had known, Rabbi Yaakov Yosef Weiss, another Auschwitz 50 survivor, who had died in 2013.

That makes eight of the 50 who have been identified: six living and two now deceased.

Each of the three newly found people recently interviewed – Chaim Schwimmer, Herskovic and Greenwald – evinced surprise that Eldar, whom none knew, was searching for them. Each man related personal details of being saved from the Simchat Torah gassing. 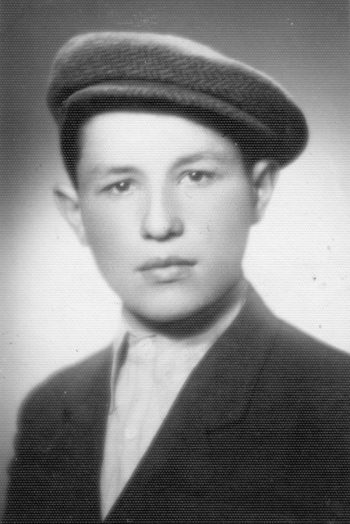 Chaim Schwimmer, 85, recalled what happened after reaching the gas chamber’s building on that rainy afternoon.

Three German soldiers entered the room. One ordered a young prisoner to sprint to the end of the room – apparently, Schwimmer thought, to test his fitness. Schwimmer boasted of his own ability to work. A soldier berated him, but ordered him to leave the building with the others selected.

Herskovic, now 88, was unusually calm that day, not dreading what likely awaited. He mumbled a passage from the Talmud on keeping the faith even when a sword was pressed against one’s neck.

“I felt that I wouldn’t die, for some reason,” Herskovic said.

After he had undressed, three soldiers appeared. One ordered the boys to line up, three per row.

“When he said that, I knew we’d be saved now. I stood in the second row, and I was immediately picked and sent to the right side, where we were to go back to the camp and remain alive,” Herskovic said.

Greenwald, 87, remembered of his exchange with one officer: “He asked me how old I am and if I was healthy.”

Each man termed what happened a “miracle.”

But Gideon Greif, an Israeli expert on Auschwitz, explained it as a routine labor call.

The Nazis “needed workers, and there was nothing miraculous or extraordinary about this,” said Greif, chief historian at the Shem Olam Institute for Education, Documentation and Research on Faith and the Holocaust. “Life and death were determined by many criteria, including the need for workers. … Here were people concentrated in one place. Sometimes it was in the fields, sometimes in the barracks and sometimes in the gas chambers.”

Greif had heard about the episode of the 50 men saved and said he’s come across six similar cases – “but there could have been 70 [cases]; I have no idea.”

Schwimmer went on to establish a paper products company. He has five sons, 53 grandchildren and approximately 200 great-grandchildren, said Isaac Schwimmer, a property manager who studies Torah with his grandfather every morning. 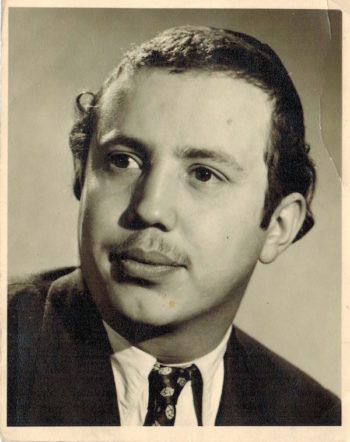 Herskovic was blinded by a combination of a Nazi beating just days before liberation in 1945 and typhus. He became a lawyer and has four children, 22 grandchildren and seven great-grandchildren. Schwimmer is his cousin; the two grew up in Muncacz, Hungary.

Greenwald, a native of Hajdunanas, Hungary, worked for 55 years as an administrator at Yeshiva Chasam Sofer in Borough Park. He has 12 children; he did not provide the number of grandchildren and great-grandchildren.

While Greenwald lives four blocks from Chaim Schwimmer, he hasn’t attended the Simchat Torah spreads at a Satmar shul on 52nd Street. Schwimmer has thrown the annual kiddush there for 38 years, and before that for 29 years in Montreal, where he first settled after the Holocaust.

It’s what’s known as a “seudat hodaya” – a gratitude meal. No announcement is made to proclaim the backstory, but Isaac Schwimmer says that congregants know. They invariably bring children to his grandfather and ask that he relate what happened in 1944.

Some of his progeny attend the kiddush, while his metaphorical kin extend far beyond the room.

Said Eldar, 86, of the fraternity: “It’s like my family in the widest possible meaning. We walked out alive.”

Seeking Kin: When an Auschwitz selection was good news

(Please email Hillel Kuttler at seekingkin@jta.org if you know of others from among the “Auschwitz 50.” If you would like “Seeking Kin” to write about your search for long-lost relatives and friends, please include the principal facts and your contact information in a brief email. “Seeking Kin” is sponsored by Bryna Shuchat and Joshua Landes and family in loving memory of their mother and grandmother, Miriam Shuchat, a lifelong uniter of the Jewish people.)