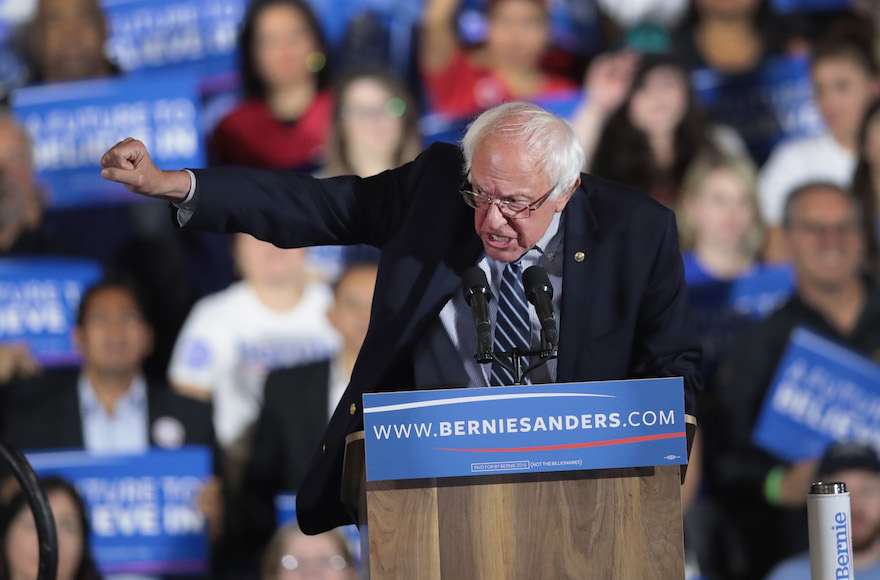 WASHINGTON (JTA) — Bernie Sanders drove much of his campaign’s bitter rhetoric toward Hillary Clinton and the Democratic establishment in recent months, according to an expose.

“At the heart of the rage against Hillary Clinton and the Democratic Party, the campaign aides closest to him say, is Bernie Sanders,” Politico reported in the article posted Tuesday night, just as Clinton, the former secretary of state, claimed the Democratic presidential nomination.

The article quoted aides speaking on the record and on background, as well as internal emails. Reporting until recently had attributed the increasingly bitter campaign tone to Sanders’ aides. The candidate started out on a positive note last year, praising Clinton for her leadership on some issues and pledging to run an issues-driven campaign.

Sanders, the Independent senator from Vermont and the first Jewish candidate to win major party nominating contests, was behind the decision not to apologize for heated exchanges between his followers and Clinton’s at a Nevada convention, instead sharpening a campaign statement blaming the state party leadership for the unrest.

He made the decision to target Rep. Debbie Wasserman Schultz, D-Fla., the Jewish chairwoman of the Democratic National Committee, after she criticized his campaign’s response to the Nevada controversy, endorsing her primary opponent.

He chose to call Clinton “unqualified” to be president ahead of the New York primary, a sobriquet that the presumptive Republican nominee, Donald Trump, has embraced with glee.

Sanders was still hopeful, the article said, without citing sources, that Clinton would be indicted before the convention on charges linked to her use of private email while she was secretary of state in President Barack Obama’s first term.

He plans to lay off half his campaign staff Wednesday, Politico reported in a subsequent article.

On Tuesday, Sanders lost four of six nominating contests to Clinton, including the grand prize, California. He vowed in his speech late Tuesday to stick out the contest through the last primary, in Washington D.C., on June 14, but appeared to be more conciliatory than in the recent past. Much of his speech targeted Trump, and he congratulated Clinton on her victories, thanking her for a “gracious” phone call she had made earlier in the evening.

Obama has declared Clinton the winner, although he has yet to formally endorse her. He and Sanders are meeting Thursday at Sanders’ request.