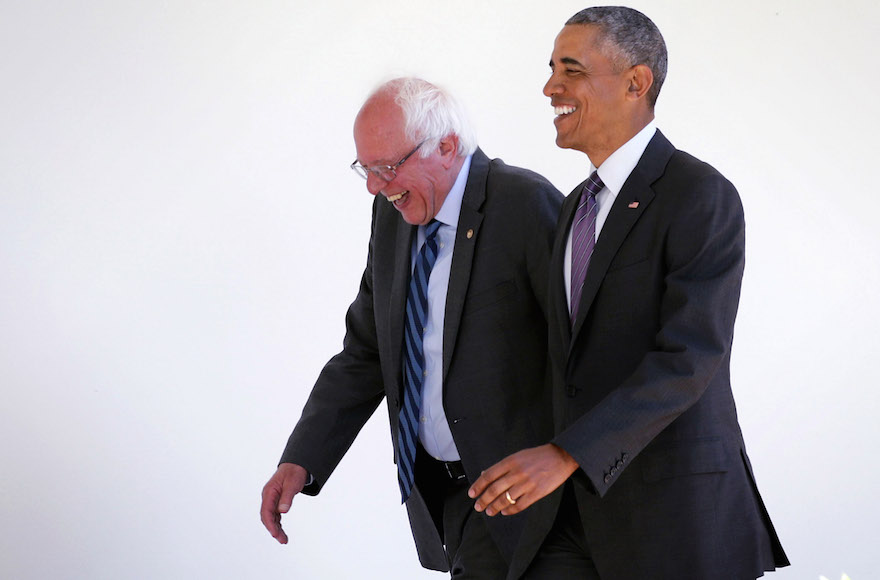 Sen. Bernie Sanders, D-Vt., walking with President Barack Obama through the Colonnade as he arrives at the White House for an Oval Office meeting in Washington, D.C., June 9, 2016. (Alex Wong/Getty Images)
Advertisement

WASHINGTON (JTA) — Bernie Sanders said after meeting Thursday with President Barack Obama that he looked forward to working with Hillary Clinton to defeat Donald Trump, but stopped short of quitting the contest for the Democratic presidential nomination.

“Donald Trump would clearly to my mind and a majority of Americans would be a disaster,” Sanders said, speaking outside the White House following an hourlong meeting with Obama. “It is unbelievable to me that the Republican Party would have a candidate for president who makes bigotry or discrimination a cornerstone of his campaign.”

Clinton claimed the Democratic nomination on Tuesday after winning California and other state primaries, but Sanders, the Independent senator from Vermont and the first Jewish candidate to win major nominating contests, has yet to concede. Obama has also recognized Clinton as the nominee, and met with Sanders at the candidate’s request.

Sanders said at the White House that he wants to meet with Clinton.

“I look forward to meeting with her in the future to see how we could defeat Donald Trump,” he said.

The tone of his remarks suggested he had accepted that Clinton is the nominee, but wants to make sure his favored issues – income inequality, reining in Wall Street and expanding health care – are on the agenda.

“We will continue to do everything we can to avoid the drift toward an oligarchic society,” Sanders said.

Notably, explaining why he would stick it out through the final primary in Washington, D.C., on June 14, Sanders spoke of promoting the campaign to make the district a state, not competing with Clinton for delegates.

“The major point I will be making to the citizens of the District of Columbia is that I am strongly in favor of D.C. statehood,” he said.