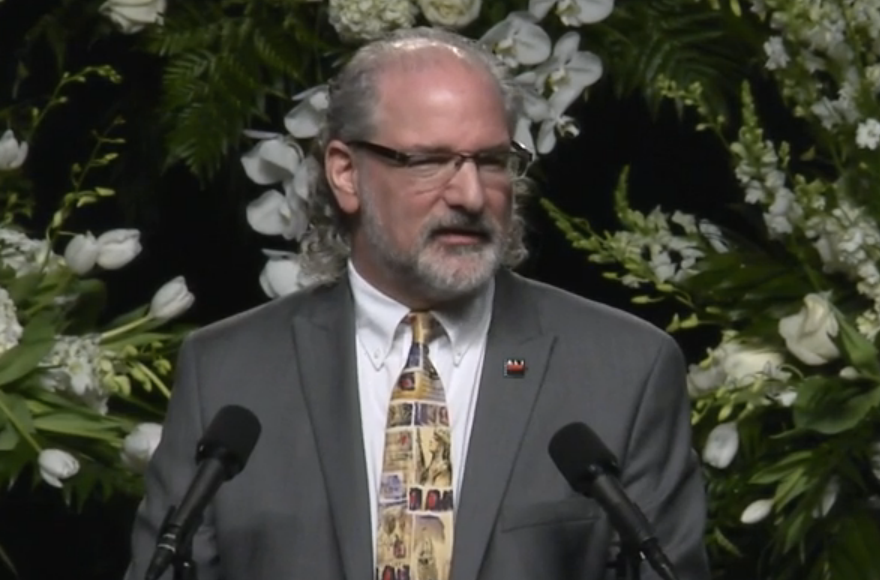 Billy Crystal recalled the legacy of his “big brother,” one rabbi led mourners in a chorus of “I am Ali” and a second rabbi criticized Israel’s government as part of Friday’s funeral service  for Muhammad Ali at an arena in Louisville, Kentucky.

The famed boxer and civil rights activist, who died June 3 at age 74, chose two rabbis among the clergy he wanted delivering eulogies: Michael Lerner, a liberal magazine publisher and activist, and Joe Rapport, the rabbi of Congregation Adath Israel Brit Shalom in Louisville

Crystal, who in the 1970s performed a one-man comedic sketch framed as a boxing match, “15 Rounds,” that celebrated Ali’s triumph over racism, said he got “lost in him,” like he never had playing any other character. Ali, after one performance, gave him the ultimate compliment: “Little brother, you made my life better than it was,” Crystal recalled.

“He taught us that life is best when you build bridges, not walls,” Crystal said, earning knowing laughter and applause for the sly dig at a presidential candidate who would keep Ali’s coreligionists from entering the United States.

Lerner, the founder of Tikkun magazine, was blunter than Crystal in referencing Trump: “We will not tolerate politicians or anyone else putting down Muslims, and blaming Muslims for a few people,” he said to a standing ovation.

He went on to express solidarity with Muslims, including by likening Israel’s government with terrorists, and to all but pitch subscriptions to the magazine he publishes, Tikkun.

“We know what it’s like to be demeaned,” Lerner said of American Jews, whom he said he was speaking for. “We know what it’s like to have a few people who act against the highest visions of our tradition, to then be identified as the value of the entire tradition. And one of the reasons that we at Tikkun magazine, a magazine of liberal and progressive Jews, but also an interfaith magazine, have called upon the United States to stand up to the part of the Israeli government that is oppressing Palestinians, is that we as Jews understand that our commitment is to recognize that God has created everyone in God’s image and that everyone is equally precious, and that means the Palestinian people as well as all other people on the planet.”

After a litany of other demands of the U.S. (end drone strikes, end private funding of elections, tell Israeli Prime Minister Benjamin Netanyahu to get out of the West Bank, end poverty), Lerner twice repeated the web address of an organization he spearheads, Spiritual Progressives.

While some called Lerner’s eulogy “powerful, inspiring and brave,” others labeled it an “embarrassment.”

As his theme, Rapport chose a commandment Jews should be familiar with – kindness to strangers. He recounted how Ali and his daughter Hana once picked up a man hitchhiking home from church. The man was thrilled to meet the legend, and at the drop-off, Hana gave the hitchhiker her number and told him to call her whenever he needed a lift home from church. Ali, tears in his eyes, recognized that he had inspired his daughter, Rapport said.

Rapport said that those who admired Ali also recognized his generosity in themselves: “We can say each of us in our hearts there’s a little bit of Ali in me.”

“I am not the fighter that Ali was, and I may not have the courage which he never lacked, and I am definitely not as pretty, but in my heart and in my hope and in my prayers, I am Muhammad Ali,” ‘ Rapport said.

He then led the stadium in a chorus of “I am Ali.”

Another speaker recalled how Ali’s vision of a welcoming Louisville extended to Jews – including one of his closest friends, sports journalist Howard Cosell.

Pastor Kevin Cosby spoke about the pride Ali instilled in African-Americans, and listed those who “stood with him in the mud” when the establishment marginalized him after he refused to serve in the Vietnam War. Among those was Cosell, who defended the former Cassius Clay and was one of the earliest and most enthusiastic adopters of the champion’s Muslim name.

Muhammad Ali vs. the Jews: A split decision