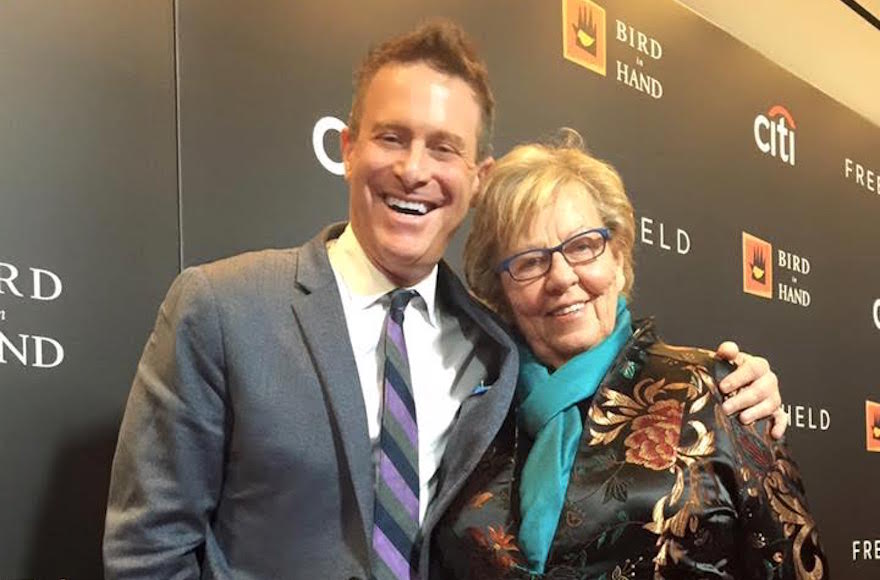 How did he really feel?

“It was painful to watch,” he told JTA last week. “I detested the movie from the first time I saw it. The portrayal of me in the movie was downright anti-gay. The movie was a grotesque stereotype.”

The movie tells the true 2005 story of a terminally ill lesbian police officer in New Jersey fighting to get pension benefits for her partner. In reality, Goldstein and his organization, Garden State Equality, led the successful effort to change the law through protest and behind-the-scenes advocacy. And he praised the movie because he felt it advanced gay rights. But Goldstein says Carell took his persistent work and reduced it to a stereotype out of “Will and Grace,” the 1990s NBC sitcom.

Goldstein, 54, who talks a mile a minute in a highlight reel of quotes, knows he is colorful. He’s been featured in two movies — “Freeheld” and the 2007 documentary of the same name and on the same topic. He called himself “the Harvey Milk of New Jersey” after the California gay rights activist slain in 1978. He is aware, in his words, that “frankly, my ego has had its healthy perspective in life.”

But for years he’s wanted to escape the portrayal from “Freeheld” as a pugnacious LGBT-focused activist. Garden State Equality helped pass hundreds of gay-rights laws in New Jersey, including allowing same-sex marriage in 2013. Goldstein, however, sees himself as an advocate for social justice broadly — and says he’s “18 times more Jewish than gay.” LGBT rights, he says, aren’t even his top issue. That would be pro-Israel advocacy.

“It reminds me of actors who are associated with one part for the rest of their lives,” he said. “Jerry Seinfeld will be associated with his character on ‘Seinfeld.’ There’s absolutely nothing he can do about it. I never wanted to spend my life as a gay civil rights leader.”

Now Goldstein has the chance to play a new part. Starting Tuesday, he’ll be the executive director of the Anne Frank Center for Mutual Respect, a relatively obscure Holocaust memorial organization based in downtown Manhattan. Goldstein wants to turn it into a national leader in fighting hate and discrimination of all kinds.

Founded in 1959 by Otto Frank, Anne’s father, the center was originally the American counterpart to the Anne Frank House in Amsterdam. The house shows visitors where the family hid during the Holocaust, along with running educational programs about the Holocaust and the dangers of anti-Semitism and racism. It has run programs in more than 50 countries, from Japan to South Africa.

Goldstein plans to expand that mission by establishing five institutes, led by prominent activists and academics, that will focus on civil rights, human rights, women’s rights, religious discrimination and journalism. He plans to release policy reports on those topics.

He also aims to open offices in Los Angeles, South Florida and a dozen other cities with large Jewish communities, and hold annual conferences for youth and women’s rights activists. He wants to support young filmmakers documenting social justice struggles.

His philosophy, in three words: “Bigger is better.”

“It’s not about are you going to do this over that,” he said. “For those who say you can’t do it all at once: first of all, watch. Welcome to Steven-land.”

Goldstein’s allies say he’s got a flare for the big. When he and Loretta Weinberg, a New Jersey state senator whom he says is “like a mother to me,” got a same-sex civil unions bill passed in 2006, he offered to host a small gathering at her Teaneck office. When Weinberg arrived, she saw teams from every major TV network.

“This was Steven’s idea of a low-key celebration,” said Weinberg, the majority leader in the New Jersey Senate. “He has the sense of purpose, the embrace of human rights for everybody and the additional PR sense to get from point A to point B.”

Raised in the Queens borough of New York City, Goldstein remembers licking envelopes at a campaign office of Democratic presidential candidate Hubert Humphrey in 1968 at age 6. Three years later, he says he successfully organized students at his elementary school to have a substandard teacher fired. As a child, homophobic bullies would beat him up.

Goldstein has degrees from Harvard in public policy and from Columbia in law and journalism. He worked as a TV producer in Washington D.C., and in several roles in state and national Democratic politics, before founding Garden State Equality in 2004. He spent a year, from 2005 to 2006, at the Reconstructionist Rabbinical College, where he says he may return one day to complete his ordination.

In 2002, he and his former partner were the first gay couple featured in The New York Times’ Weddings section, for their civil union in Vermont. Goldstein calls that his proudest moment.

He left Garden State Equality in 2013 after New Jersey legalized same-sex marriage, and taught law classes focused on activism at Rutgers University. There, Goldstein said, he sought “to train a bunch of ‘mini-mes’” who would “have the chutzpah to change the world.” But two years in the classroom left him antsy for a return to activism.

Fighting discrimination through the lens of Jewish values is already a crowded field, most notably by the Anti-Defamation League. But the ADL’s CEO, Jonathan Greenblatt, told JTA that Goldstein would be “a welcome addition to this struggle,” and Goldstein also said he’s looking forward to partnering with the ADL. At the same time, though, Goldstein said he plans to run the center like a lean political campaign as opposed to a bureaucratic nonprofit.

“I don’t view my work through the laid-back prism and slower cadence of a not-for-profit organization,” he said. “I’m an intense campaigner. I don’t see us as competing [with the ADL]. I believe deeply in partnerships.”

And he won’t be able to shift his focus from LGBT rights just yet. Following Sunday’s terror attack at a gay club in Orlando that killed 49 people, Goldstein spent much of his first day at the Anne Frank Center commenting on the tragedy.

“The last speech that I made as the founder of Garden State Equality was a speech of triumph for all we in the LGBT community have achieved to reach dreams of equality,” he told JTA on Tuesday. “Imagine what it’s like that the first speech at my new organization has to include a reference to LGBT death. The work of justice is never done. I’m in a daze.”

One political issue Goldstein plans to address is presumptive Republican nominee Donald Trump’s rhetoric, which has targeted Muslims, Latinos and other minority groups. While Goldstein finds constant Hitler and Nazi comparisons offensive, he says there is a parallel between Trump and pre-World War II racism in Germany.

“While it’s not always fair to compare every act of hate to the Holocaust, it’s always appropriate to invoke the lessons of the Holocaust,” he said. “The language that emerged in Germany in the ’20s and early ’30s has an unmistakable parallel to the language Trump uses today.”

Goldstein backs presumptive Democratic nominee Hillary Clinton. In April, he wrote on Facebook that “sometimes you compromise to forge consensus, but sometimes you don’t to stand your ground. Knowing when to do which is the art of the revolution. That’s Hillary Clinton’s gift.”

But as much as he wants his personal energy to drive the Anne Frank Center forward, Goldstein said his political leanings aren’t important to its universalist message. Rather than having the organization depend on him, he said he expects to rely on it.

Last year, two years after leaving his LGBT rights group, Goldstein’s marriage ended. He was bereft of a partner and a mission. In the Anne Frank Center he saw an opportunity for his bounds of energy. The organization is going to be big, Goldstein says, simply because he’s going to throw himself into it completely.

“Once my relationship ended, I’d moved on from Garden State Equality and two pillars of my life were gone,” he said. “This organization has given me a chance to build something dramatically new. It has gone a long way to making me feel whole again. I’m someone who needed a cause.”