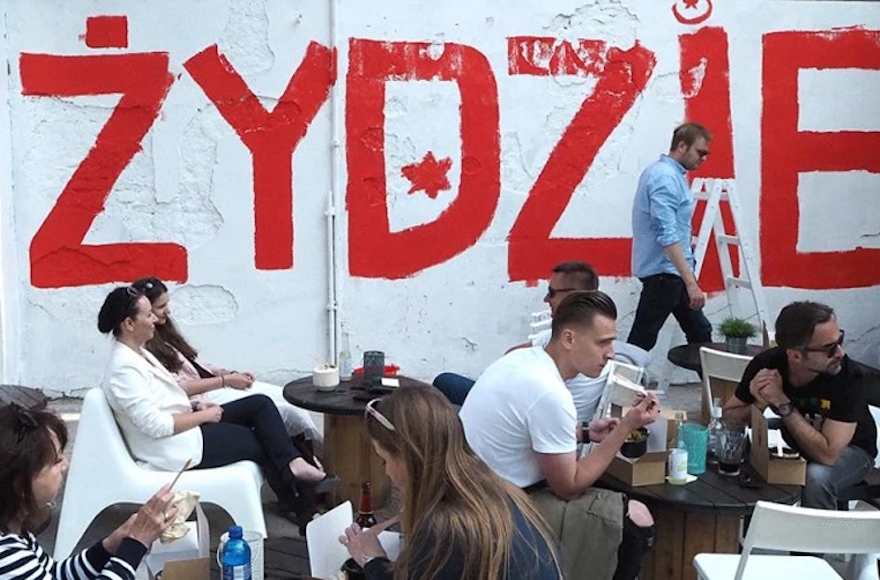 (JTA) — Anti-Semitic graffiti is so common in Poland that it hardly makes the news, except maybe when it’s on Holocaust sites or Jewish cemeteries.

But huge philo-Semitic slogans painted in the national colors and confessing a sense of loss over the destruction of Polish Jewry in the Holocaust are somewhat more remarkable. Which is why Polish media is abuzz this week with reports about a graffito reading “I miss you, Jew” that an artist painted on a main street in Lodz.

Rafał Betlejewski, who is not Jewish, coordinated with local Jews and others before painting the attention-grabbing inscription on June 11 on Piotrkowska Street, a main artery. The graffito was part of a series he began in 2005. The founder of an advertising firm, Betlejewski, 48, has painted or helped paint the message dozens of times at sites with a special place in the history of Polish Jewry.

One such site was Brzeska Street, which used to form one of the boundaries of Warsaw’s Jewish ghetto. Another, in 2010, was Jedwabne, where local Poles killed hundreds of Jews in 1941. Betlejewski also set up a display there of a burning barn in memory of the Jews who were burned alive by their Christian neighbors. It was this dark episode in Polish history — the epicenter of the acrimonious debate in Poland over Holocaust-era complicity — that got him thinking about Polish-Jewish relations in the first place, he said in interviews about his work.

In April, in the Warsaw neighborhood of Powiśle, unidentified parties blacked out the word “Jew” in Betlejewski’s graffiti, prompting him to call on fans to “counter hatred” by continuing to write the word on the wall every time it gets blacked out. Though he had permission from the owners of that wall, he has in the past had legal problems over his “I miss you, Jew” inscriptions, which municipalities saw as vandalism.

“I want to reclaim the word ‘Jew,’ snatch it from anti-Semites, who are in this country are the only ones using it freely,” the Gazeta Wyborcza newspaper quoted Betlejewski as saying in 2010 about his campaign and the Jedwabne action especially. “I aim to build a platform used to express positive emotions towards the people known as the Jews.”

The Lodz operation was less controversial, but the site selected for the artwork is no less symbolic. Forbidden to Jews when it was first built in the early 19th century, Piotrkowska Street was finally opened to some Jews of means in 1825. During the German occupation of Poland, it was renamed Adolf Hitler Street. Jews were rounded up, shot and beaten on its cobblestones during various pogroms. 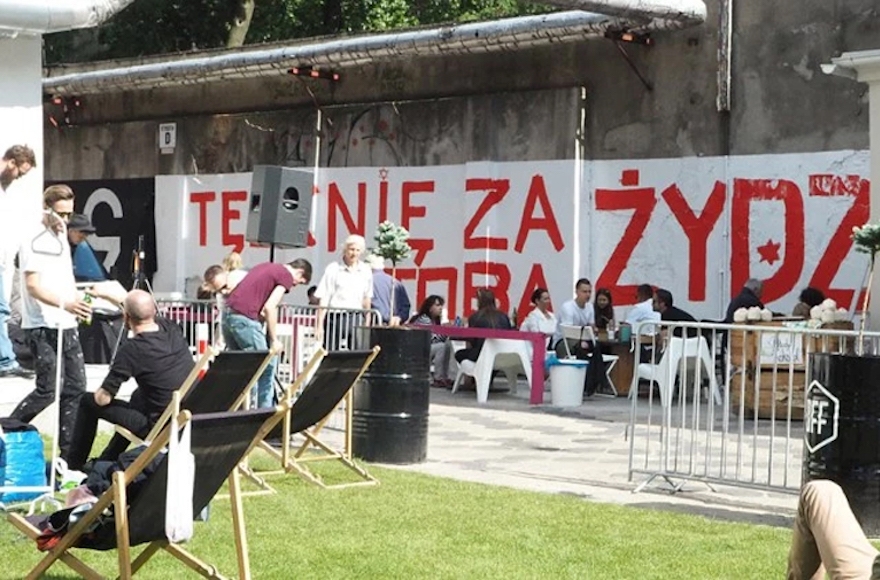 The city in central Poland, about 80 miles from Warsaw, was historically home to one of the country’s most vibrant Jewish communities and one of the largest ghettos during the Holocaust. But Jewish life all but disappeared from Lodz in 1944.

Nearly all of the ghetto’s 164,000 residents were murdered in the Holocaust, according to the Yad Vashem Holocaust museum in Jerusalem, along with 90 percent of Poland’s pre-Holocaust Jewish population of 3 million.

Despite this tragic legacy, Betlejewski said he enjoyed working there, compared to past experiences in Warsaw.

“Lodz was a very nice change,” Betlejewski wrote on his blog. “Maybe it’s because we painted in a semi-private space, maybe because the wall was ready, and I went there at the invitation of the people who wanted this inscription. Everyone ate a delicious hummus served by the Israeli Jaffa restaurant.”

Jonny Daniels, the founder of From the Depths, a nonprofit that works on commemorating the Holocaust and building bridges between world Jewry and Poland, said that, despite occasional expressions of hostility to Jews there, “The number of those with a positive attitude toward Jews far outweighs those with negative attitude.” Thousands of non-Jewish Polish volunteers engage with From the Depths, he told JTA, while the Polish government maintains a keen interest in “issues connected to the Jewish past.” In March, Polish President Andrzej Duda opened a museum for the Righteous among the Nations, non-Jews who saved Jews during the Holocaust.

Nevertheless, some of the Polish government’s interest in Jewish issues — like the criminal investigation into a Princeton University professor who has explored Polish culpability during the Holocaust — has not gone down very well internationally. Jan Gross, a Polish Jew who emigrated to the United States in 1969, is suspected of violating Poland’s laws against insulting the nation by saying during an interview recently that Poles killed more Jews during World War II than they killed Germans.

Poland also shows little interest in offering restitution for property that belonged to Jews before the genocide. The “current government, leading a tough nationalist line, is not likely to agree to this painful process,” wrote Dina Porat, head of the Kantor Center for the Study of Contemporary European Jewry in Tel Aviv, in an Op-Ed in Haaretz earlier this week.

But back in Lodz, Betlejewski was staying positive, noting that to him, it was “important that there were young Polish Jews there. Young Lodz Jews. People who are trying to rebuild the Jewish of community.”