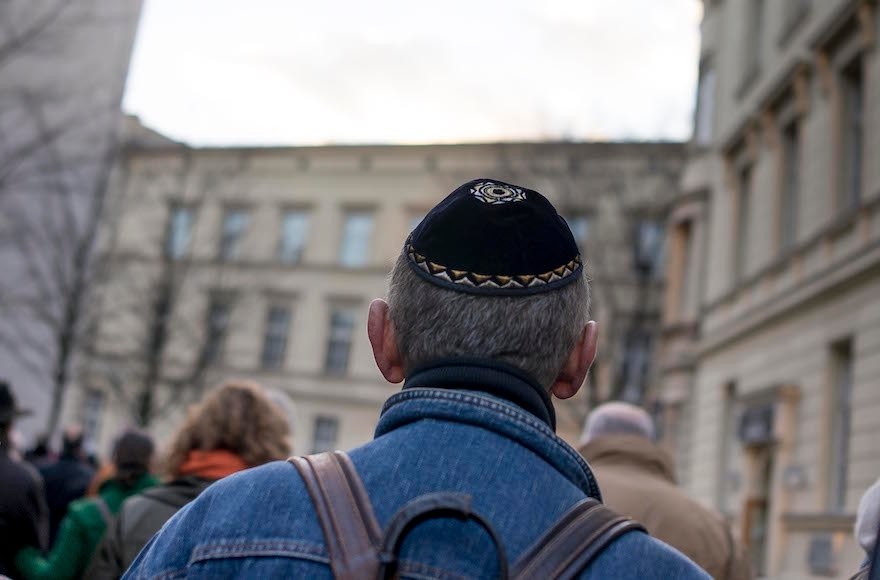 BERLIN (JTA) — Unknown perpetrators kicked and beat a 21-year-old Jewish man wearing a kippah after slurring him with anti-Semitic insults.

The victim, identified as Oliver Geffers of Bonn, was slightly injured in the Tuesday evening attack but did not seek medical help, according to the police report on the incident. The state criminal police agency is investigating.

Geffers is not Orthodox but wears a kippah in public because he strongly identifies as Jewish and believes Jews should not be afraid to show their identity, Geffers told JTA. Geffers works as a volunteer at a refugee center in Cologne and said he does not experience open anti-Semitism from refugees, but does from people on the street.

According to the police report, the incident occurred Tuesday at approximately 9:30 p.m. in a park along Puschkinallee, a main thoroughfare. The victim said the three attackers appeared to be Arabic. They commented on his yarmulke and insulted him with anti-Semitic comments. One of them then beat and kicked him, he reported, before all the men fled.

In March, the Berlin-based Department for Research and Information on Anti-Semitism reported that there were 34 percent more anti-Semitic incidents reported in 2015 than in the previous year. The independent organization was founded that year by the Berlin-based Association for Democratic Culture with the aim of looking beyond the official statistics.

In all, the organization reported 401 incidents in 2015 in Berlin, less than half of which were included in official police statistics. Of the 401 cases, 151 involved threats, bullying and attacks; 31 individuals were injured, most of whom were openly identifiable as Jewish by wearing religious clothing or articles.

A source who had seen photos of the victim said there were open wounds in his leg, which suggested the attack had been brutal.