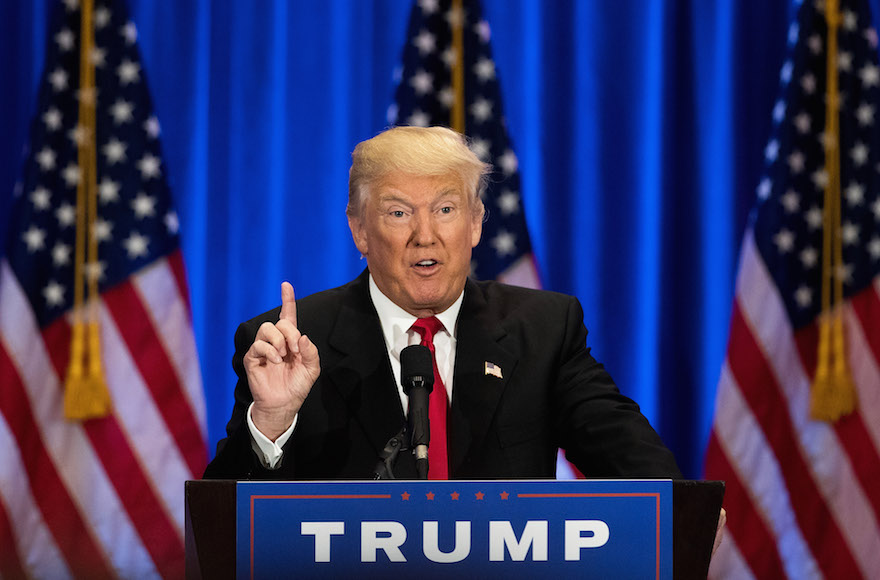 WASHINGTON (JTA) — Donald Trump said Iran is the dominant Islamic power in the Middle East and is on the road to nuclear weapons because of Hillary Clinton, a signal that Israel and Middle East policy will be at the forefront of an increasingly bitter presidential campaign.

Like two recent Clinton speeches, Trump’s address was more about defining his opponent as unviable than about advancing his own policies — and like Clinton, he said he would be better for Israel.

Trump said Clinton was corrupted by donations from the Muslim and Arab world to her husband’s charitable foundation, although at least one instance he cited as a gift to Clinton – $58,000 in jewelry from Brunei – was a gift to the State Department and not for Clinton’s use, according to The New York Times.

Describing the world in 2009 at the outset of Barack Obama’s presidency and Clinton’s stint as secretary of state, he said: “Iran was being choked by sanctions.” Now, he said, “Thanks to Hillary Clinton, Iran is now the dominant Islamic power in the Middle East and on the road to nuclear weapons.”

The sanctions in place in 2009 were not keeping Iran from advances in its suspected nuclear weapons program. Tougher sanctions in 2010, introduced under Obama, are believed to be what led Iran to negotiate the sanctions relief for nuclear rollback deal between Iran and six major powers.

Critics of the deal, led by Israeli Prime Minister Benjamin Netanyahu and congressional Republicans, have said it has empowered Iran to make mischief in the region and does not go far enough to squelch its nuclear weapons capability. All acknowledge that it has nonetheless set back Iran’s suspected nuclear weapons ambitions by at least 10 years.

Clinton has taken credit for laying the groundwork for the agreement, although she has also hinted it could use tougher implementation.

“Egypt was governed by a friendly regime that honored its peace treaty with Israel, something very nice, because by the way, Israel has been totally mistreated by the United States,” Trump said.

The Hosni Mubarak regime honored the Camp David peace treaty, but so did its successors. Most experts saw the revolution that toppled Mubarak in 2011 as inevitable.

Tensions between Obama and Netanyahu have been high, and there have been deep divisions over peacemaking and the Iran deal that pro-Israel critics of Obama say leave Israel exposed in the diplomatic sphere. The Obama administration also has increased defense assistance and intelligence cooperation substantively.

Three weeks ago, Clinton cited Trump’s pledge early in the primaries to be neutral on Israeli-Palestinian peacemaking in order to bash him on Israel.

“It is no small thing when he talks about leaving NATO, or says he’ll stay neutral on Israel’s security,” she said on June 2 in San Diego, in what was billed as a foreign policy speech but what was mostly a broadside against Trump.

Trump has since walked back his remarks on “neutrality” and said he would favor Israel in Middle East policy.

“The world must understand that the United States will act decisively if necessary, including with military action, to stop Iran from getting a nuclear weapon,” Clinton said in San Diego. “In particular, Israel’s security is non-negotiable. They’re our closest ally in the region, and we have a moral obligation to defend them.”