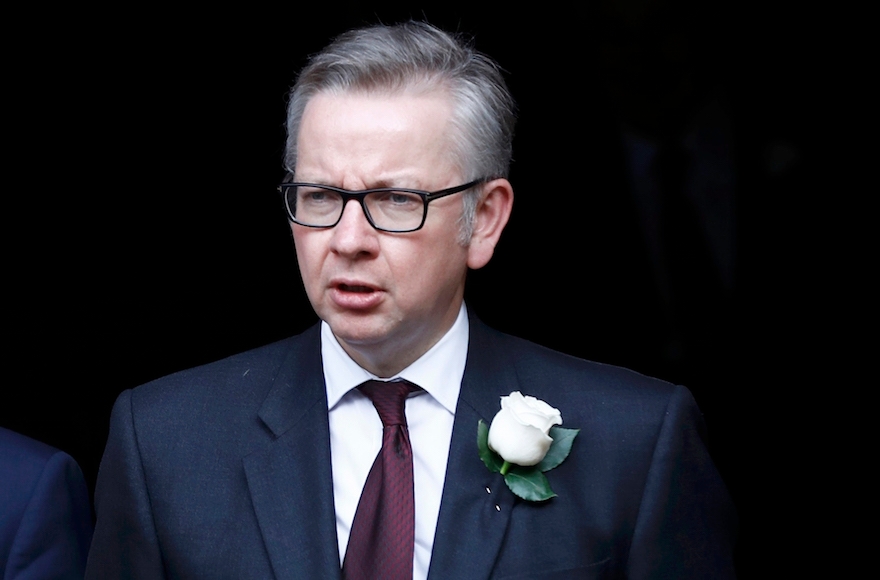 (JTA) — Britain’s justice minister likened some opponents of the campaign to have Britain leave the European Union to Nazis behind the smear campaign against Albert Einstein in 1930s Germany.

Michael Gove, who co-chairs the Vote Leave campaign working for Britain’s exit from the EU in the national referendum being held Thursday, made the comparison the previous evening in an interview with LBC radio.

“We have to be careful about historical comparisons, but Albert Einstein during the 1930s was denounced by the German authorities for being wrong and his theories were denounced, and one of the reasons of course he was denounced was because he was Jewish,” said Gove.

Gove was speaking about economists who in the buildup to the vote warned that an exit would have dire consequences for the British financial establishment and market. Prime Minister David Cameron and many of the ruling party’s lawmakers also oppose leaving the European Union.

Elaborating on the Einstein comparison, Gove added: “They got 100 German scientists in the pay of the government to say that he was wrong and Einstein said: ‘Look, if I was wrong, one would have been enough.'” Gove urged listeners to “interrogate the assumptions that are made.”

Noting low growth rates in continental Europe and high unemployment, he said that “freeing ourselves from that project can only strengthen our economy.”

The International Monetary Fund, 10 Nobel Prize-winning economists and the Bank of England have all warned that leaving the EU could damage the economy. Results from numerous polls show a 50-50 split in eligible voters, making the surveys too close to call.

An exit by Britain, one of the union’s leading economies, is widely seen as endangering the body’s integrity.

Millions of Britons arrived Thursday at thousands of polling places to vote on the referendum, despite rainy and stormy weather. Some 46 million are registered to vote.

The Chabad movement, meanwhile, contrasted in an article on its official website the European Union’s fragile state with what Rabbi Menachem Posner, the website’s editor, described as the Jewish people’s unwavering unity.

“A change in circumstance can very well render the union a burden rather than a boon,” he wrote Thursday about the Brexit debate, adding that “there are unions that just don’t break up. Like the union of the Jewish people.”

Despite disagreements and profound differences, “We are one people, united by a common Torah and a common Father in Heaven,” Posner wrote.