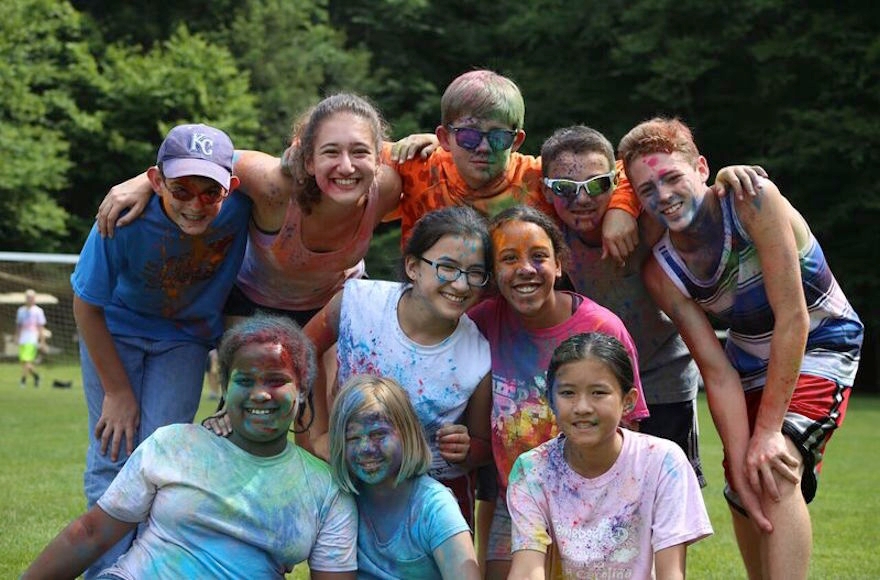 Camp JRF has embraces diversity since its founding, with activities that rarely divide up the boys and the girls. (Courtesy of Camp JRF)
Advertisement

WHIPPANY, N.J. (New Jersey Jewish News via JTA) — Bathrooms accessible for transgender children and staff are old news at Camp JRF, the Reconstructionist movement’s summer camp in South Sterling, Pennsylvania. Five years ago the camp posted signs on bathroom doors stating “This bathroom may be used by any person regardless of gender identity or expression.”

From its founding in 2002, Camp JRF set a similarly inclusive tone, according to director Isaac Saposnik. Among its accommodations, the overnight facility decided not to divide into a boys’ side and a girls’ side or to have boys’ activities and girls’ activities.

“Boys and girls are always together,” Saposnik said. “We don’t have a lot of gendered programming. All the campers play sports together all day.”

As attention has shifted in recent years to the needs of transgender and gender-fluid kids, other Jewish camps have been catching up. Among the leaders in making such children (and staff) feel welcome are Camp Tawonga in Northern California; Union of Reform Judaism Eisner Camp in Great Barrington, Massachusetts; B’nai B’rith Perlman Camp in Lake Como, Pennsylvania, and Ramah in the Rockies in Sedalia, Colorado, where a transgender man — the director of camper care at its Ramah Outdoor Adventure — made headlines earlier this year when he gave birth to a daughter.

“These are issues that will confront everyone; it’s a new reality,” said Jeremy Fingerman, CEO of the Foundation for Jewish Camp, which serves as the umbrella organization for 300 day and overnight Jewish camps.

There is no reliable data on how many transgender kids attend Jewish camp, according to Daniel Bahner, national manager of education and training for Keshet, a national Jewish LGBTQ advocacy organization headquartered in Boston. But, he said, “It is becoming an increasingly visible conversation.”

Camp JRF’s first out transgender camper arrived “a few years ago,” according to Saposnik, and he estimated that about a dozen of the approximately 430 campers enrolled each summer have gender identity issues.

Earlier this year, 50 camps participated in a webinar on transgender issues arranged by FJC and provided by Keshet. FJC also provided a forum for camps to share best practices at its 2016 Leaders Assembly in March in East Brunswick, New Jersey.

Such practices include offering changing areas that allow individual privacy, with curtains and shower stall doors; housing policies that allow transgender or “gender non-conforming youth” to bunk where they feel most comfortable, and banning hurtful language.

In 2014, Eisner Camp polled campers’ parents after a family asked if the camp could accommodate a 12-year-old transgender girl. Not one of the 65 families polled objected, and the girl was welcomed and placed in a bunk with the rest of the girls. The first year she used a counselor’s private bathroom to shower; the next year she used the girls’ restroom and showers.

Last year at Camp Tawonga, which serves the San Francisco Jewish community, a 13-year-old camper came out as a transgender boy to female bunkmates. The girls decided to change their cabin label from G5 (Girls 5) to EG5 (Every Gender 5). Other cabins adopted the designation, according to J. Weekly.

At many Jewish summer camps that have decades of traditions, however, change can be difficult.

At Camp Ramah in the Berkshires in Wingdale, New York, which is affiliated with the Conservative movement, director Rabbi Paul Resnick has spent the last year confronting what he called the “painful” reality that the Ramah culture he loved first as a camper and ultimately as a professional can be an “uncomfortable” space for some. In particular, he said, the binary gender culture of Camp Ramah, where activities are separate for boys (“banim”) or girls (“banot”), is coming under fire.

“People have challenged the idea that we need to do” separate evening activities for boys and girls, he said.

A constant motivator for him is the recollection of the camper who left early in the summer of 2013 because “he felt uncomfortable because really, she was transgender,” Resnick said, switching pronouns mid-sentence to match the reality the camper felt. “I said to the mom, ‘What can I do?’ She said, ‘Just educate yourself.’”

Resnick accepted the challenge and has been delving into the subject and seeking solutions by reading literature, attending conferences and speaking with other camp directors as well as Ramah alumni.

This year, Resnick brought in Keshet to train his staff. And he’s making a conscious effort to change his language. He now uses “chevra” (group of friends) instead of “ladies and gentlemen” or “boys and girls.” Not only is the Hebrew phrase more appropriate for a Jewish camp, he said, but “it does not assume anything about anyone on the gender spectrum.”

Parents, it seems, know which camps are ahead of the curve. Saposnik said Camp JRF gets at least one call every month relating to approaches to gender identity issues at camp. 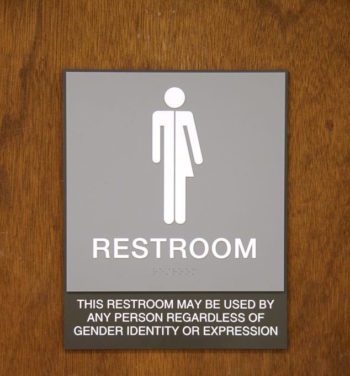 The family bathroom at Camp JRF, the Reconstructionist movement camp in Sterling, Pennsylvania, was easily converted with a sign to make everyone feel comfortable. (Courtesy of Camp JRF)

Two years ago he sent a letter to Camp JRF families about diversity at the camp that included a specific discussion of transgender issues; an updated version went out last week. Following a definition of terms that distinguishes among sex (“the biology you were born with”), gender (“your emotional or intellectual identity”), sexual orientation (“who you are attracted to”) and gender expression (“how you present yourself in the world”), it includes a brief discussion of each and then provides basic guidelines for campers who may have questions.

On the other hand, “It’s always okay to ask someone what pronouns (‘he/him,’ ‘she/her,’ ‘they/them’) they prefer to use. If you aren’t sure and can’t ask, just use the person’s name.”

But even the camps that are proactive face challenges. For starters, some of the necessary changes to provide privacy for transgender and cisgender kids — those whose self-identity conforms with the biological gender they were at birth — can be expensive.

But other changes are “not that hard”: offering a family restroom and adding stall doors to showers fall into this category.

“It’s not different from the changes a parent would ask us to make for almost any other issue, like a ramp on the cabin or plugging in a sleep machine,” he said. “When we say we’re serious, we mean it.”

As for parents who think it’s great as long as it’s “not their kids’ bunk,” Saposnik said, by the end of the summer, for most campers, it’s a non-issue, “just an interesting backstory.”

Sometimes Saposnik  encounters families for whom Camp JRF is too progressive. In that case, he said, he suggests a camp that might be a better fit.

“Our commitment is to send Jewish kids to Jewish camp,” he said. “We cannot serve everyone. No one can do that.”

Fingerman, of the Foundation for Jewish Camp, said, “We’re hopeful that the broad tapestry of Jewish camp will have options for every Jewish kid and every Jewish family.” But, he pointed out, what they do “has got to fit within the culture of that camp.”

While Resnick would like to reach a point where embracing transgender campers is a non-issue, he knows his Camp Ramah isn’t there yet. He wants to be able to embrace as many kids from as many backgrounds as he can.

While the options “are not limitless,” Resnick said, “I want parents with a gay child or with a trans child to feel comfortable. I don’t want a reactive model. I want a proactive model.”

CORRECTION: A previous version of this article referred to Camp Tawonga as Camp Towanga.

Even Orthodox Jews starting to wrestle with transgender issues