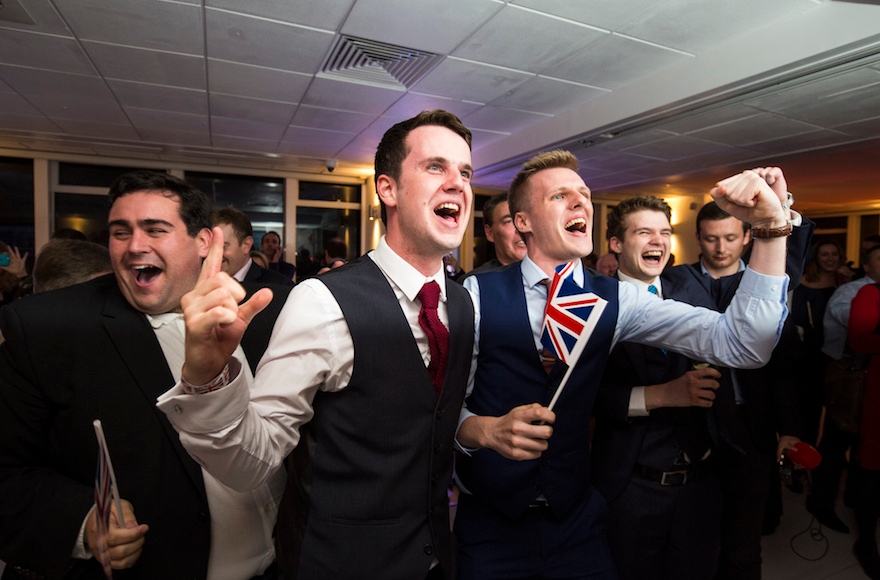 (JTA) — Britain’s Jewish leaders had mixed reactions to the country’s surprising vote in favor of leaving the European Union, with few offering an opinion on whether or not leaving the EU is a good idea.

Several praised Prime Minister David Cameron, who announced after the vote that he would resign, for his record on Jewish issues and voiced hope that Thursday’s referendum will put an end to the divisions caused by the so-called “Brexit” campaign.

Israeli Prime Minister Benjamin Netanyahu issued a statement praising Cameron but offering no opinion on the nonbinding vote in favor of leaving the EU.

In a notable exception to the lack of opining by Jewish leaders, Jewish Chronicle editor Stephen Pollard in an Op-Ed in his paper critiqued what he described as “bizarre myths” about “what Brexit will mean for Israel and British Jews.”

Pollard said the country’s departure from the EU will not hurt its relationship with Israel, but could even improve it, saying “one could argue that, away from the Brussels bartering and negotiations that lie behind the EU’s foreign policy, Britain will be free to carve out an even more supportive stance, should we wish to …”

He also argued that leaving the EU would not lead to increased anti-Semitism, suggesting that, “far from Brexit hurting minorities, the real problem for minorities comes … when the mainstream loses touch with people and the only vehicles left to make a point are extremists.”

“Our freedom from the EU will make extremism less, not more, likely, as the pressure cooker is released,” he said.

The UK’s Jewish News reported that the Board of Deputies of British Jews said in a statement that it hoped the country “will now come together” after a “divisive and bruising” campaign, and “will nonetheless continue to work with colleagues and organisations across Europe as part of our broader programme of advocacy on international issues of concern to the Jewish people.”

Sir Mick Davis, chairman of the Jewish Leadership Council, told the Jewish News he was sad to learn of Cameron’s resignation, because Cameron “has always been a loyal friend of the Jewish community and a visible and vocal supporter of the State of Israel. He has worked constructively with us, engaging on issues of concern to British Jews.”

Noting that the Brexit debate has “sharply divided our country,” the UK’s Chief Rabbi Ephraim Mirvis said, according to the Jewish News, that “the time for disagreement and division is now over.”

While not specifically addressing the Brexit, Reform Judaism’s Rabbi Laura Janner-Klausner told the Jewish News that she hoped the country would “continue to be an outward facing society, confident of its place in the world” and called for Britons to “reject isolation.”

The Brexit: 6 things you need to know