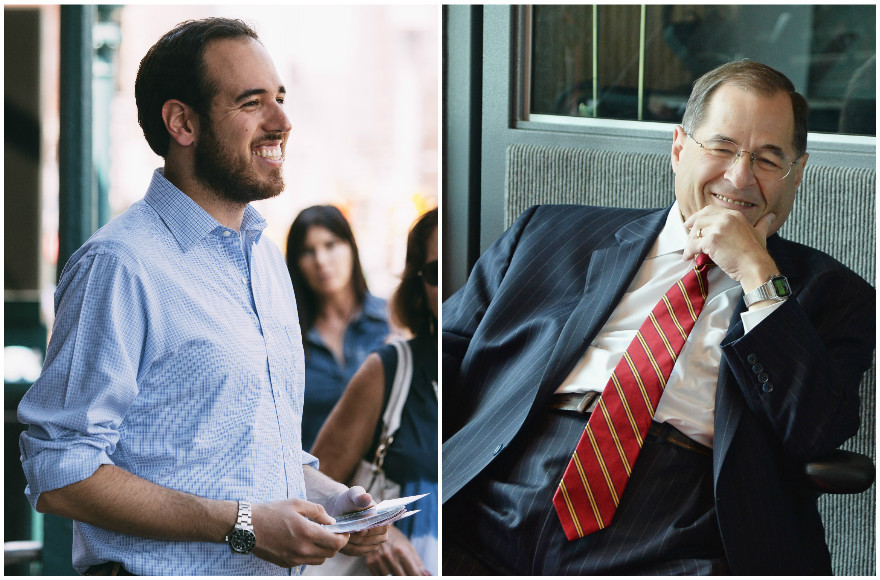 NEW YORK (JTA) — Rep. Jerry Nadler, a graduate of the Crown Heights Yeshiva who represents one of the country’s most Jewish congressional districts and is the co-founder of the congressional Israel Working Group, likely never expected to be called anti-Israel.

But the 12-term incumbent’s Democratic primary challenger, Oliver Rosenberg, a gay Yeshiva University graduate, is attacking him on that very point, lambasting his support for last year’s agreement to curb Iran’s nuclear program.

Rosenberg is Nadler’s first primary challenger in two decades. Their New York District 10 spans Columbia University, the Upper West Side and the West Village in Manhattan and the Brooklyn haredi Orthodox neighborhood of Borough Park, and whoever wins Tuesday’s primary will be the voice in Washington, D.C., of many New York Jews in all their variety.

The primary also shows the continued salience of the Iran deal, which split the U.S. Jewish community before and after it was finalized last July.

Nadler, who has served the district since 1993, has lined up a string of high-profile endorsements, including from President Barack Obama, U.S.  Sen. Charles Schumer (D-N.Y.), The New York Times and a range of civic groups. Last time he was reelected with more than 80 percent of the vote.

“I’ve been a very active progressive Democrat,” Nadler said Monday in a debate with Rosenberg on WNYC, New York City’s NPR affiliate. “I’m endorsed by every progressive group around because of my very strong record on leadership on all of these issues — leadership on LGBT issues, leadership on civil rights, civil liberties, economics, housing.”

Rosenberg, 30, a California native, is a former J.P. Morgan investment banker-turned-high-tech entrepreneur. He came out publicly in 2008 on a panel discussion at Yeshiva University, and in 2014 started Or Chayim, a monthly Orthodox Shabbat service on the Upper West Side for LGBT Jews.

Rosenberg is seeking to portray Nadler as a stale politician out of touch with his constituents. He strikes many of the same notes as Democratic presidential candidate Bernie Sanders, lamenting low wages and a rising cost of living while attacking veteran politicians for being controlled by special interests. A Rosenberg TV spot places small business funding and fighting high rents at the top of his agenda.

But many of Rosenberg’s fiercest attacks against Nadler stem from his vote for the Iran deal, which Rosenberg portrays as anti-Israel — and homophobic. After deliberating for weeks, Nadler supported the deal after receiving a letter from President Barack Obama answering his concerns. Nadler agreed with critics that the deal was flawed, but said he was “convinced it is the best option for achieving our overriding security imperative.”

Rosenberg disagrees, saying the deal did too little to stop Iran and that by easing sanctions on Iran, supporters of the deal are complicit in the country’s human rights abuses.

“We can no longer count on Jerry Nadler to be a strong pro-Israel voice,” Rosenberg told JTA on Friday. “Iran is killing gay people. We just looked the other way when we handed $150 billion for them to continue despicable acts.”

Nadler, like the Obama administration, framed his support for the deal as pro-Israel, arguing that it distances Iran from obtaining the means to nuke Israel.

“Iran is an enemy, and they do support terror, and they will continue to do it,” he said in the WNYC debate. “But they will be far less dangerous an enemy without nuclear bombs. The agreement gives Israel time to prepare for future events.”

The New York Daily News has endorsed Rosenberg based on the Iran issue. But given Nadler’s strong support from liberal activists across the spectrum, it’s unclear whether opposition to the Iran vote can propel Rosenberg to an upset victory. Even in Borough Park, the densest Jewish pocket of the district, voters may still support Nadler to ensure they keep getting the social services he’s helped them receive.

“Orthodox Jews, who have been the only ones to strongly oppose the deal, are not the majority of the electorate for this primary,” said Columbia University political science professor Ester Fuchs. “People have to know about the [Iran] vote, disagree with him on the vote and they have to decide that vote is the most important thing that will affect their vote choice in the primary. That’s a high bar for most people.”

The campaign has also seen some personal attacks. Rosenberg drafted Jewish comedian Jackie Mason to record a robocall for him deriding Nadler’s Iran vote — and his looks. Mason, who has accused Obama of wanting to “leave Hamas intact,” has also praised presumptive Republican presidential nominee Donald Trump, claiming “Israel is his favorite thing.”

“You would never know he was a Jew all his life,” Mason said of Nadler in one of the 30-second calls that were first reported in the New York Post. “By looking at him, you could tell he’s a little overweight, and he’s a little short.”

Nadler has also attacked Rosenberg for being a Democrat in name only. He read several pro-Republican tweets from Rosenberg’s feed (since deleted), and pointed out that until 2012, Rosenberg was registered as a Republican. Rosenberg attributed registering as a Republican to parental influence, and says he gave $10,000 to Obama’s 2012 reelection campaign.

“Jerry has no idea what it’s like to be gay, a teenager and in the closet with the pressure to conform,” Rosenberg said in the WNYC debate. “I am gay and I was a Democrat trapped in a Republican body.”