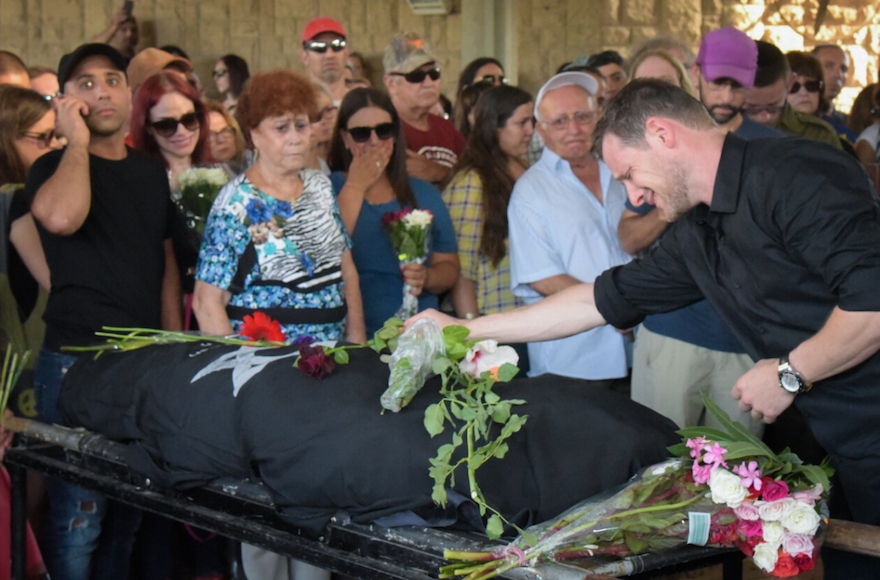 Freinds and family attend the funeral of Esti Weinstein at the Yarkon cemetery in Tel Aviv, June 28, 2016. (Avi Dishi/Flash90)
Advertisement

(JTA) — Hundreds of mourners attended the funeral of a formerly haredi Orthodox Israeli woman who was found dead in what is believed to be a suicide.

Esti Weinstein, 50, was buried in Petach Tikvah on Tuesday, the Times of Israel reported.

Weinstein’s body and a suicide note were discovered in her car at a beach in Ashdod on Sunday, a week after she went missing.

Six of her seven daughters had refused contact with their mother after she left the Gur sect of Hasidic Judaism eight years ago.

Tami Montag, the daughter who stayed in touch with Weinstein and who also left the haredi Orthodox community, gave a eulogy at the funeral in which she said, “You were everything to me, a friend and mother.”

According to Haaretz, Weinstein wrote a short memoir titled “Doing His Will” about life in the Gur community, her decision to leave it and the pain she felt after her daughters severed their relationships with her.

Weinstein, who married at 17, also wrote about her unhappy marriage in which she was required to follow numerous strict marital guidelines that are unique to the Gur sect. According to her memoir, the guidelines restrict couples to having sexual relations only twice a month.

In the book, Weinstein wrote of her ongoing pain at being cut off from her daughters.

“I thought it was a temporary matter, but the years are passing and time isn’t healing, and the pain doesn’t stop,” she wrote.

Estranged family members also attended and spoke at the funeral, according to the Times of Israel.

“It’s hard for me to speak about you. For me, you will always be like your first 43 years, when you were pure,” said her father, Rabbi Menachem Orenstein, according to Ynet.

Weinstein’s boyfriend also spoke at the funeral, The Times of Israel reported, but did not identify him.

“At the heart of every religion is a kernel of unity, and that’s the source of life. But unfortunately it’s turned into ideology,” he said. “Don’t let any rabbi lead you to hatred and to alienation. The pain from being cut off by your kids is massive.”

Sister of Faigy Meyer, former Hasid who took own life, hangs herself

Faigy Meyer’s suicide is a Jewish tragedy, not just an Orthodox one