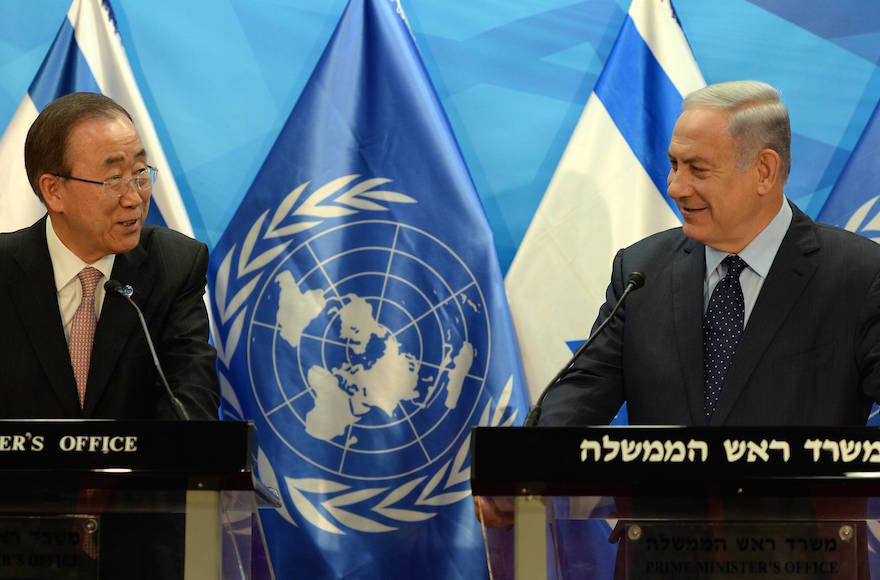 In a joint appearance in Jerusalem during Ban’s 48-hour visit with Israeli and Palestinian leaders, Netanyahu also called on the United Nations to “highlight Hamas’ crimes and understand that our security measures are aimed only at keeping our citizens safe from this threat and we use judicious force in this regards.”

“Hamas is cruelly and illegally holding the remains of our soldiers and holding our citizens,” Netanyahu said Tuesday during an appearance with Ban in front of reporters before the two leaders started a private meeting. “I ask you to use your standing to help return home these soldiers and these citizens. It’s a humanitarian position and elementary humanitarian requirement that Hamas and its criminal activities is of course throwing into the winds.”

Netanyahu reminded Ban of his stated goal during a 2013 visit to Israel to work to halt anti-Israel bias in the international body.

“I know that your desire for all countries to be treated fairly and equally remains true today. I urge you to dedicate your last six months as the secretary-general of the United Nations in trying to right this wrong. And when I say that, it’s not just for Israel’s sake. It’s for the credibility of the U.N.”

Ban called on Israel to work quickly toward a two-state solution.

“I encourage you to take the courageous steps necessary to prevent a one-state reality of perpetual conflict,” Ban said. “No solutions to the conflict will be possible without the recognition that both Palestinians and Jews have undeniable historic and religious connection to this land. No solutions can come through violence. It must be based on mutual respect and recognition of the legitimate aspirations of both peoples.”

Earlier Tuesday, Ban visited the Gaza Strip, where he called on Israel to lift the “suffocating” blockade on the coastal strip, Reuters reported.

“The closure of Gaza suffocates its people, stifles its economy and impedes reconstruction effort. It is a collective punishment for which there must be accountability,” Ban said.

The call to lift the closure came a day after Israel and Turkey announced a reconciliation agreement that keeps the blockade in place.