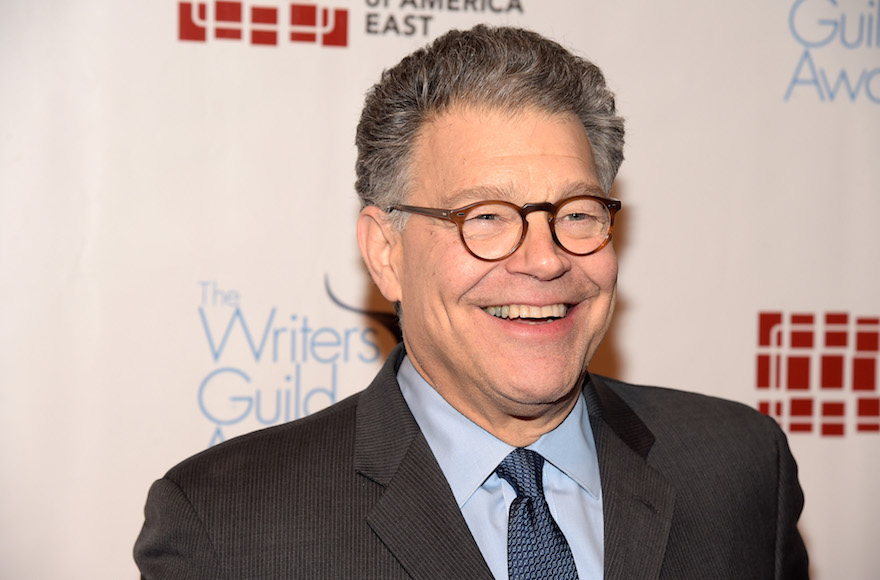 Last week Sen. Al Franken (D-Minn.) said that if Hillary Clinton asked him to be her running mate, he’d take the job. “If Hillary Clinton came to me and said, ‘Al, I really need you to be my vice president, to run with me,’ I would say yes, but I’m very happy in the job that I have right now.”

Although Franken, 64, has spent seven years in the Senate and proven himself to be a conscientious lawmaker – championing decidedly unfunny issues like health insurance, mental health services in schools and net neutrality – some still find it hard to take the former comedian and Saturday Night Live writer seriously as a political figure. He was, after all, the author of an article in Playboy in 2000 about his visit to a (fictional) institute offering virtual pornography, and wrote an infamous Saturday Night Live sketch in which a suave Roman played by Burt Reynolds tries to pick up women at the local vomitorium.

And yet Franken, who defeated Republican incumbent and fellow Jew Norm Coleman in a bitter, highly disputed 2008 election, is on a number of short lists for the veep spot on the Democratic presidential ticket. The Hill included Franken among “Clinton’s 9 most likely VP picks” (admittedly, he was number 9), and Newsweek ranked him fifth as a possible choice, tied with former Massachusetts Gov. Deval Patrick.

Franken is himself the author, in 1999, of Why Not Me?, a satirical campaign memoir in which a character named Al Franken becomes president (and chooses as his running mate former Connecticut senator Joe Lieberman, correctly predicting Al Gore’s VP choice a year before it happened).

Here’s the case being made for a Clinton-Franken ticket by some (mostly progressive) political commentators, along with some caveats.

A bit of Bernie, a foe of Trump

Politico suggests that Franken has what it takes to win over the “energized left-wing youth” who backed Vermont Independent Bernie Sanders, and can defuse Donald Trump’s toughest barbs and insults with his more finely tuned sense of humor. (Franken once said of George W. Bush, “When the president during the campaign said he was against nation building, I didn’t realize he meant our nation.”)

“Franken has worked hard to prove he is a detail-oriented, issues-driven senator, not a political novelty act,” writes Bill Scher. “But he has decades of experience skewering factually challenged conservatives.” His track record before running for senator includes a series of books of sharp political commentary and a stint as a liberal radio host on the short-lived Air America network.

Newsweek’s Taylor Wofford also notes that Franken voted against fast-tracking the Trans-Pacific Partnership, the global trade agreement that is opposed by the Democratic Party’s liberal base. “And his personality — friendly, approachable, jokey — would compliment Clinton’s extremely well,” writes Wofford. “He’s also outspoken, and he wouldn’t be afraid to get into it with Trump on Clinton’s behalf. And if anyone can out-bully Trump, it’s Franken.”

His Senate seat is safe

If Franken has to resign to run for veep, his replacement would be chosen by a fellow Democrat, Minnesota Gov. Mark Drayton, “so Clinton doesn’t need to worry about losing a seat to the GOP,” writes Wofford.

Politico recalls Franken’s knock-down, drag-out race for the the Senate in 2008. As JTA reported at the time, it took eight months of recounts and legal challenges – including a decision by the Minnesota Supreme Court — before Franken could declare victory over Coleman. Franken led by 312 votes after a statewide recount, but Coleman had sued, arguing that the recount was flawed.

It was easier for him the second time around, when he cruised to a 10-point reelection victory in 2014.

The Daily Kos notes that Franken has been friendly with Bill and Hillary Clinton for two decades, and in the tough times ahead would be a comfortable Oval Office companion for the high-strung Hillary.

“An early Clinton endorser, Franken could serve as a bridge between the grass-roots left and the Democratic establishment,” writes Scher.

The Daily Kos even thinks Franken would be a good choice to succeed Clinton as president “after her two full and highly successful terms in office,” perhaps with another short-listed vice presidential possibility as his running mate, Secretary of Housing and Urban Development Julian Castro.

Although Lieberman came close, Franken would become the first Jewish vice president in American history. That may ease the disappointment of Sanders’ supporters who hoped their Jewish candidate — like Franken, a New York City native — would make it the White House.

Minnesota has a recent tradition of electing Jews to high office. Before Franken and Coleman faced off, three previous elections for senator there matched two Jews – Republican Rudy Boschwitz vs. Democrat Paul Wellstone twice, then Wellstone vs. incumbent Norm Coleman. (Wellstone was killed in a plane crash two weeks before that election.)

“I don’t think Minnesota is ready for a gentile in this seat,” Franken quipped at the time.

On the other hand

Picking Franken gives the GOP a lot of ammo: many of his remarks from before his career in politics, including his old SNL footage, will be resurfaced if Clinton picks him. And some may worry he doesn’t have the temperament for the Oval Office. Plus, Minnesota’s not a swing state. And he’s an old white guy.