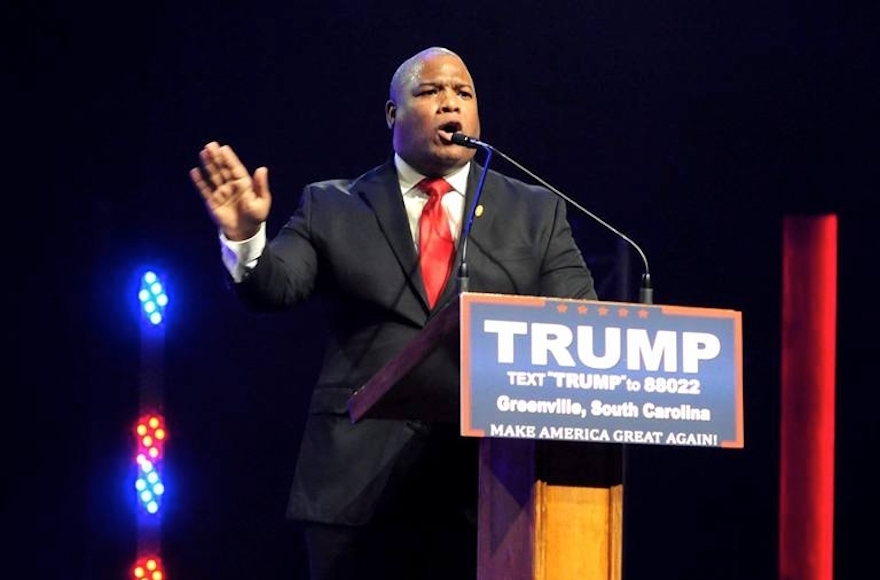 (JTA) — An African-American pastor who warmed up the crowd at a rally for Donald Trump by urging the religious conversion of Bernie Sanders said he hadn’t meant to insult the “Jewish faith.”

Mark Burns, the president of the Christian NOW Television Network and one of Trump’s few public supporters in the black community, spoke in March at a campaign event in Hickory, North Carolina. In discussing Bernie Sanders, the Vermont Independent senator and the first Jewish candidate to win a major party nominating contest, Burns said, “And Bernie Sanders, who doesn’t believe in God, how in the world are we gonna let Bernie? I mean, really!” he said.

“Listen, Bernie gotta get saved,” said Burns, according to The Associated Press. “He gotta meet Jesus, I don’t know. He gotta, he gotta have a comin’ to Jesus meeting.”

In an interview with The Washington Post in January, Sanders said he believes in God but is not actively involved in organized religion.

This week, in an interview with AP, Burns described criticism of his comments about Sanders as  a “wake-up call.”

“To be honest, that was the first time I really became conscious that the media was listening to what I said,” said Burns, who speaks frequently at rallies for Trump, the presumptive Republican presidential nominee, and regularly promotes the candidate on his Twitter page.

Burns added that he hadn’t intended to criticize Judaism and that his remarks “had nothing to do with [Sanders’] faith or religion or conversion to Christianity.”

AP reported that Trump, when asked at a news conference in March about Burns’ remarks, said he was unaware of what Burns had said about Sanders.

Burns, who has spoken at Trump events in each of the past three months, said he never heard anything about the comment from the campaign.