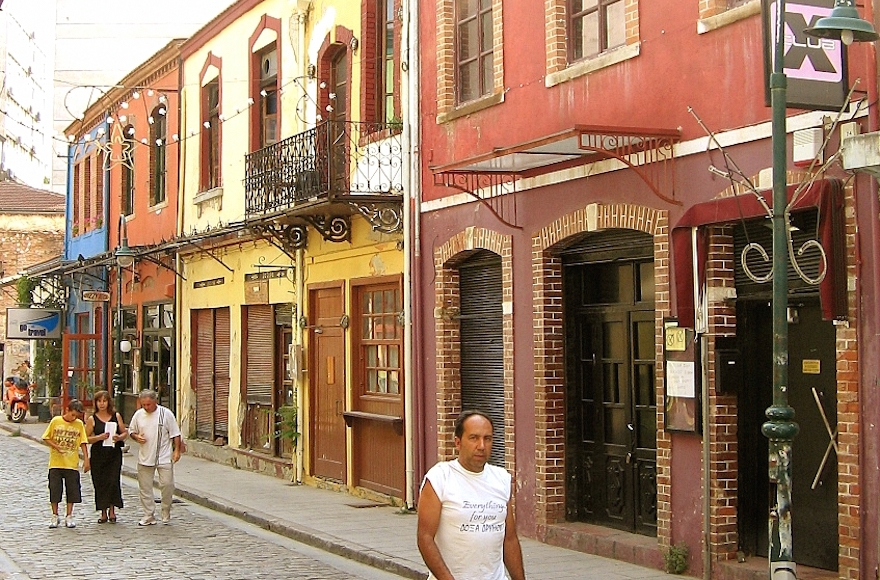 A street in the Ladadika neighborhood, which used to be the Jewish quarter in Thessaloniki, Greece. (Wikimedia Commons)
Advertisement

WASHINGTON (JTA) –  “I am proud to be a Vlach,” says Yiannis Boutaris, the mayor of Thessaloniki, Greece’s second largest city.

Ostensibly, we’re here at the Washington Hilton to discuss Boutaris’ bid to put the Jewish back in Thessaloniki, a city — perhaps best known as Salonika —once home to the largest numbers of Jews in Greece.

But I’m the one who brought up the Vlachs, a dwindling minority of speakers of an ancient Latin dialect, scattered throughout the Balkans. When he ambles over, I greet him with the “Ci fac?” I have learned from my wife’s family. Pronounced “Tzi fatz,” it more or less means “what’s up?”

His eyes widen a little. “Gini!” he says, he’s fine. He looks at his aide, Leonidas Makris, with a look that suggests, “I thought you told me this guy was Jewish?”

I explain my connection, through marriage, to the Vlachs, insular shepherds whose descendants, starting a century ago, assimilated throughout Balkan societies. He asks me where my wife is “from.” I know better than to say Washington, and I tell him Perivoli, the tiny village in the Pindar mountains where our family has summered. He smiles, recognizing the village as one of a constellation of mountaintop Vlach summertime refuges, even before I have completely pronounced it.

Boutaris, a youthful, wiry 74, was here in June to be honored by the American Jewish Committee at its annual Washington conference. He is among 508 American and European mayors who have signed on to the AJC’s Mayors Against Anti-Semitism pledge.

Boutaris stands out among the mayors, though, for his commitment to his city’s Jewish meaning. At his most recent inauguration, he wore a yellow patch reminiscent of the ones forced on Jews during the Holocaust. It “was received as a definite position against the Golden Dawn,” Greece’s anti-Semitic, ultranationalist party, he said.

“Everyone knows what the yellow star was,” he said. 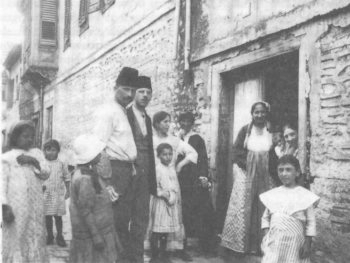 Thessaloniki was a haven for Jewish refugees from the Spanish and Portuguese inquisitions. (Wikimedia Commons)

Boutaris, a vintner by trade, enjoys recounting his bouts with his city’s prelates. He recalls his first election campaign, spearheading an alliance of left-leaning parties in 2010. “I said in a public speech, ‘the archbishop acts like the mujahedin!’” he said, referring to the Muslim jihadis in various countries.

On Thessaloniki’s national day, October 26, the archbishop warned him, “‘you will never see the municipality chair’!”

The next month, Boutaris won the election handily. Of the archbishop’s expressed enmity, he says: “I think this helped a lot,” although he hastens to add that he has since achieved a détente with the church.

Boutaris’ city, an Ottoman haven for Jewish refugees from the Spanish and Portuguese inquisitions, was famous for centuries for its Jewish plurality. Its reputation for tolerance diminished when the city was riven by nationalist struggles as the Ottoman empire collapsed in the early part of the 20th century, and then by a devastating fire in 1917 that drove many Jews to emigrate.

There remained a vibrant community nonetheless, even as the ethnocentric Greek nationalist movement exerted pressure on minorities – Turks, Jews, Vlachs – to repress their languages and identities and become Greek. Two of my Jewish grandparents were born there. In 1941, the Nazis occupied the city and in short order deported over 95 percent of the community to death camps and labor camps. Salonika’s Jewish past is a faint echo now, recalled only in the occasional neighborhood name – like the Modiano market, named for a prominent Jewish family.

Boutaris, like the other 188 European mayors who signed onto the AJC pledge, casts it as a means of containing the anti-Semitism reemerging on their continent.

Boutaris and the other signers “are individually and collectively sending a powerful, if not unprecedented, message to their larger communities,” David Harris, the AJC CEO, told JTA in an emailed statement.

He and Makris, his assistant, are not comfortable discussing Greece’s status, according to Anti-Defamation League surveys in 2014 and 2015, as the continent’s most anti-Semitic country. Some 67 percent of the population hold anti-Semitic views, the more recent survey said. The mayor and his assistant believe the survey is vastly exaggerated.

Makris tries to explain the results as a product of a deeply pessimistic Greek political culture, where poll respondents are likely to believe the worst about their leaders, immigrants, minorities, their next-door neighbors — just about everyone — but otherwise behave in a welcoming manner.

“There is an ambivalence among Greek people,” he says, noting how Greeks simultaneously cast the flood of refugees from Syria as a burden — and yet have turned out en masse to assist them.

Boutaris says that Israel’s conflict is keenly felt in a country that has ancient ties with the Arab world, and that has been influenced in recent decades by close relations between Arab nationalists and the Greek left. “Greeks wonder why they can’t find a way of living together,” he says of Israel and the Palestinians. 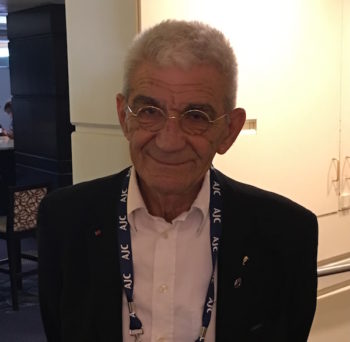 Yet the obsession with Israel among some Greeks clearly frustrates Boutaris, in a way that Israel’s leaders would appreciate. Every country deals with internal and external threats, he says, some in ways that make Israel’s actions pale by comparison. “You have to sit down and see what’s happening in Syria!” he exclaimed.

There is a deeper, more resonant dimension to Boutaris’ Jewish outreach, one that aligns with his origins as a Vlach, a people disappearing into Greece’s forcefully monolithic culture.

Boutaris wants Greeks to remember that their country was once not so monocultural, that there were other peoples that once thrived here. He has proposed a monument to the Young Turks, who emerged in Thessaloniki in the first decade of the 20th century and whose uprising eventually led to Turkey’s transformation in the 1920s into a secular state.

His focus in Washington is raising awareness about a Jewish cultural center he hopes to found. (The city has a small Jewish museum.) He has raised $20 million so far; he needs another $5 million or so for operating costs.

The one thing he does not want it to be is another Holocaust memorial; instead, he wants a monument to a community that thrived in Thessaloniki for 500 years and that helped define the city.

I bring up with Boutaris another personal connection to Thessaloniki: an incident from my first visit to the city, in 1996, that still haunts me.

A newly met Greek friend plied me and my then fiancée with a little too much retsina, the sweet and potent Greek white wine, during a visit to his house.  When I conked out and lay down, I overheard him, through a haze, ask my fiancée what had become of me. She told him I was sleeping it off, and he laughed and began to sing “Durme, Durme,” the Jewish Ladino lullaby that at one time would have been familiar to the city’s Jews and non-Jews alike.

I asked our Greek friend afterward if he understood the lullaby’s Jewish origins; he had no idea. It was a song. It was another echo of a disappeared Jewish city.

Boutaris gets it, before I have even finished pronouncing “Durme, Durme” – he knows the lullaby. “Attention must be paid” might as well be his mission statement. “No one knows what Thessaloniki could have been,” he says, “if it hadn’t lost 95 percent of its Jewish community.”