Trump says he wouldn’t have removed ‘Star of David’ tweet 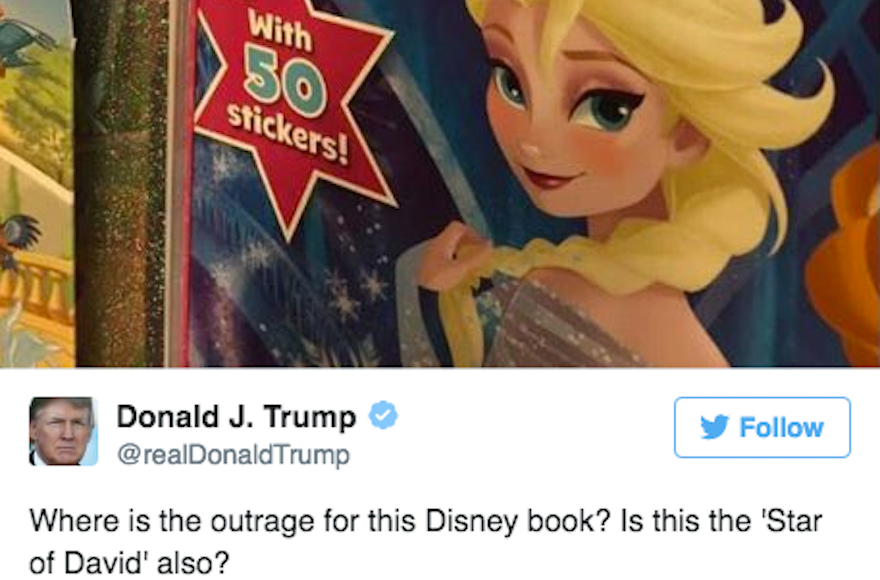 Donald Trump tweeted an image of a poster promoting the film "Frozen" to defend his previous tweet of a six-pointed star.(Screenshot from Twitter)
Advertisement

(JTA) — Donald Trump kept alive a controversy over a campaign tweet featuring apparently anti-Semitic imagery by saying his staff “shouldn’t have taken it down” and tweeting a picture featuring popular Disney characters to demonstrate that the media are “dishonest.”

Trump defended the campaign’s tweet, which featured a Star of David shape and dollar bills superimposed over an image of Hillary Clinton, during a rally Wednesday in Ohio.

The image, posted Saturday, bore the words “most corrupt candidate ever” inside the red six-pointed star. Critics, including the Anti-Defamation League, said the imagery was anti-Semitic and noted that it had first appeared on a neo-Nazi internet bulletin board. Trump’s staff removed the tweet and replaced it with an altered version, although Trump has continued to maintain that the star was meant to be a sheriff’s star or just a plain star.

Trump told his supporters gathered near Cincinnati that he would have preferred to have left the star on the tweet’s image.

“I would have rather defended up and say, ‘no, that’s not a Star of David, that’s just a star that talks about corrupt Hillary,'” Trump said at the rally, according to The Hill political website.

He accused the media of “racially profiling” his campaign for highlighting the star and conflating it with the Star of David.

“They’re profiling, not us, because why are they bringing this up? Why do they bring it up?” Trump asked.

He said his social media director, Dan Scavino, who is married to a Jewish woman, was the one who put out the original tweet. Earlier this week, Scavino said he removed the original tweet because he didn’t want to “offend” anyone.

Later on Wednesday night Trump tweeted a photo of the cover of a sticker book tied into the hit Disney film “Frozen” featuring a red six-pointed star on its cover.

“Where is the outrage for this Disney book? Is this the ‘Star of David’ also? Dishonest media! #Frozen,” he wrote.

Where is the outrage for this Disney book? Is this the ‘Star of David’ also?
Dishonest media! #Frozen pic.twitter.com/4LJBpSm8xa