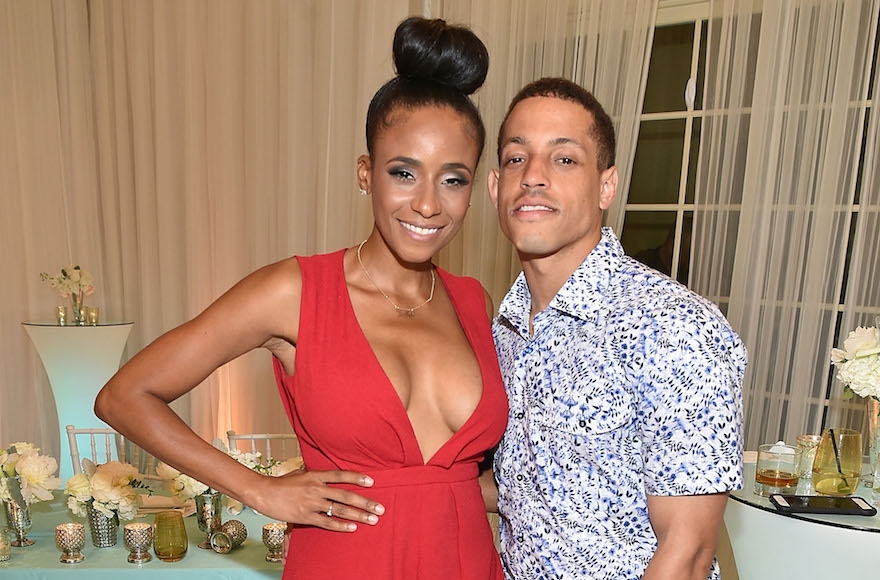 (JTA) — The wife of NFL player Brent Grimes used an anti-Semitic slur in ridiculing the Miami Dolphins’ Jewish owner for hiring a fellow Jew to be his team’s executive vice president.

Miko Grimes, who is known for her often brash Twitter feed, in a tweet Sunday said Stephen Ross “was keeping his jew buddies employed” with his hiring of Mike Tannenbaum.

Gotta respect ross for keeping his jew buddies employed but did he not see how tannenbaum put the jets in the dumpster w/that sanchez deal??

Grimes was also referring to Tannenbaum’s unsuccessful tenure as general manager of the New York Jets, where he offered quarterback Mark Sanchez an ill-fated contract extension.

Brent Grimes, a four-time Pro Bowl cornerback, was released by the Dolphins in March. Rumors spread at the time that his wife’s Twitter controversies, which often involved scathing criticism of the team’s quarterback, Ryan Tannehill, cost him his job and hurt his reputation in the eyes of other National Football League teams.

Ross acknowledged at the NFL owners’ meetings in March that Miko Grimes’ tweets played a role in her husband’s fate with the Dolphins.

“I think everybody knows what she represented,” Ross said to reporters, according to ESPN. “I thought it was best that the Dolphins move on from Brent and Miko.”

Miko Grimes deleted her Twitter account for a short time after the Dolphins released her husband, who has since been signed by the Tampa Bay Buccaneers.

She clarified her comments in a statement to ESPN.

“When I wrote ‘jew buddies,’ I was speaking about how a lot of communities (Jewish, Christian, gay, sometimes fraternities and sororities) will hire their ‘own people’ for jobs before others. That’s a fact! Why people find facts offensive is strange to me. And now im a racist? Lmao! How?”

She added: “If what I said is racist or anti-Semitic, why isn’t it also racist to only hire their own? America is just an easily offended, fake reacting, bunch of cry baby a– p——! Anyone that thinks I’m a racist needs to build a f—— bridge and get over it. I’m not a racist, I’m a realist.”

The Buccaneers are owned by Bryan, Edward and Joel Glazer, who are descendants of Lithuanian Jewish immigrants.