It’s not a bird – it’s SuperMeat: Israeli startup aims to grow meat without the animal 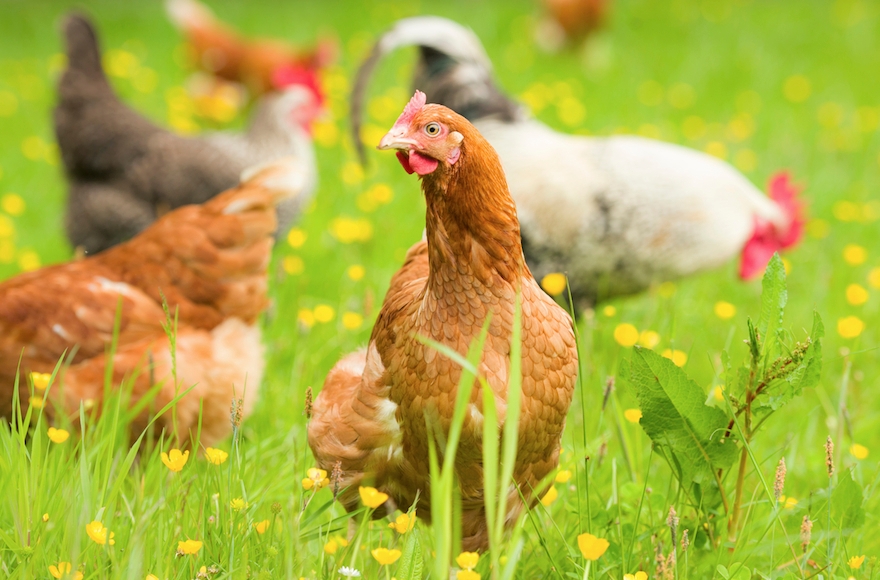 Chickens would be spared under a bioengineering method being developed by the Israeli food tech startup SuperMeat. (iStock)
Advertisement

TEL AVIV (JTA) – The founders of an Israeli food tech startup want you to enjoy your meat without the guilt — in fact, without the animal.

SuperMeat, which launched in December and began an online crowdfunding campaign Monday, is developing a method for bioengineering “cultured meat” from animal cells. Its tagline: “Real meat, without harming animals.”

Imagine a chicken breast without the chicken, developed in a machine from cells taken from a living bird and cultured in a nutrient-rich stock.

The company has won notice in Israel with slick marketing, celebrity endorsements and news coverage. But the increased awareness has raised tough questions for two highly principled groups of Israeli eaters: Kashrut observers and vegans.

SuperMeat’s co-founder and co-CEO, Koby Barak, himself a longtime vegan and animal rights activist, said his company’s cultured meat will be both kosher and vegan-friendly, and he has the supporters to prove it.

“I have spoken to about 10 rabbis and I don’t see any problem. It will be kosher,” Barak told JTA. “The vast majority of the vegan-vegetarian movement is very supportive, and we thank them for really supporting us.”

Among rabbis and vegan activists, though, the debate over exactly what to make of SuperMeat, and cultured meat in general, is far from resolved.

SuperMeat is not the first cultured meat company, but it is the first to focus on chicken. Others have already produced beef, and at least one is working on pork. Mark Post, who made headlines with the first cultured hamburger in 2013, told JTA he hopes to be the first to get his product, recently branded Mosa Meat, to market — in four to five years. 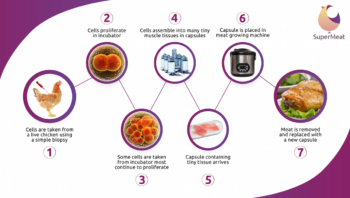 What SuperMeat thinks makes it unique is its patented technology, which is being developed by a company co-founder and its head of research, Yaakov Nahmias, a biomedical engineer at the Hebrew University of Jerusalem.

Production is to work like this: Cells will be harmlessly taken from a chicken and put into a special machine that simulates the bird’s biology, allowing them to self-assemble into meat.

Barak said the process could revolutionize how the world eats, striking a major blow against environmental degradation, animal suffering and global health pandemics. Other meats could be made using more or less the same process, he said.

The Indiegogo fundraising goal is $100,000, which Barak hopes will demonstrate consumer interest to investors, from whom it will need to raise millions more.

Science aside, SuperMeat certainly stands out for its marketing. Between the videos of actors and models on the company’s Facebook page are taped testimonials by haredi Orthodox and religious Zionist rabbis.

Dov Lior, the chief rabbi of Hebron and Kiryat Arba in the West Bank, and Yuval Cherlow, a Ranaana rabbi who helped found the religious Zionist rabbinical group Tzohar, argue on video that SuperMeat will be parve. They say animal cells don’t count as meat and that SuperMeat’s process anyway transforms the cells into an entirely new substance. Based on similar logic, they say, gelatin derived from pigs is kosher – a position with which many other Orthodox rabbis disagree.

“Here, from the beginning it’s not considered meat because it’s a microscopic thing. … And even if it were really meat, because it changed its form, a ‘new face has arrived here’ and it’s not considered meat, and it’s clearly parve,” said Lior, using a Talmudic expression meaning that something that had previously been forbidden is no longer forbidden because of changing circumstances.

On the other hand Yisrael Rosen, head of the Zomet Institute, which works to reconcile Orthodox Jewish law and technology, says SuperMeat is meat and suggests it will need rabbinic supervision.

“The Rabbinate is trying to include everyone, so therefore it will go to the more extreme opinions,” he said. “But I think when there is a big need, I think most of the rabbis will say you should” accept the more lenient position.

The New York-based Orthodox Union has yet to take a position on cultured meat. (The group doesn’t recognize pig gelatin as kosher.) But Rabbi Moshe Elefant, the chief operating officer of the OU’s kashrut department, suggested the product sounded a lot like meat. He also confirmed that the OU’s position would be based solely on Jewish law.

“We of course are very concerned about the environment, but our first consideration is always halachah,” he told JTA.

SuperMeat’s concerns are more in line with those of vegans and animal activists. After all, much of the company’s staff comes from that world. Like Barak, SuperMeat co-founder and co-CEO Ido Savir has been a vegan and animal rights activist for nearly two decades. Both men left jobs in Israel’s high-tech industry to join the company and focus full time on the cause of cultured meat.

These deep roots in Israel’s surging vegan and animal rights movement give SuperMeat street cred. Enthusiastic supporters include the vegan activist and restaurateur Ori Shavit and leaders of the Israel-based advocacy groups The Vegan North and 269.

“I’m a great admirer of the dedication of the people behind the project,” said 269 founder Sasha Boojor, who is known for having used a hot iron to brand himself with his movement’s numbers during a 2012 animal rights protest in Tel Aviv. “Of course it would be best if people decided to stop eating animals all together, but it’s not the reality we’re facing right now. And this research can address the suffering of hundreds of billions of animals who are suffering each year for no reason at all.”

Boojor added: “If people eat cultured meat, I have no problem at all. I don’t have a problem eating it myself.”

But other activists caution against being seduced by SuperMeat.

“SuperMeat is not the change of mindset that we are working on,” said Sharbel Balloutine, the founder of an Arab-Israel group called The Vegan Human, which works with Jews to promote veganism and animal rights. “We are working on compassion. We are working on justice. And that’s what really attracts me to my vegan activism.”

Anonymous, another Israeli activist group, sent JTA a statement saying: “We wish SuperMeat best of luck with the research, we welcome any initiative that can help animals. However, we must remember that as consumers, we don’t need to wait for a scientific breakthrough in order to save animals. … There is no nutritional need for meat.”

Nahmias, the scientific brain behind SuperMeat and a rare omnivore on staff, told JTA his work is motivated by his love of schnitzel, an Israeli staple that he said is becoming increasingly unsafe to eat.

“As a kid, I was eating what my mother and my grandmother were cooking. And I want my kids to be able to eat the same kind of schnitzel,” he said. “That’s the reason that I do this.”