Hollande: After deadly Nice attack, all of France living under the threat of Islamist terrorism 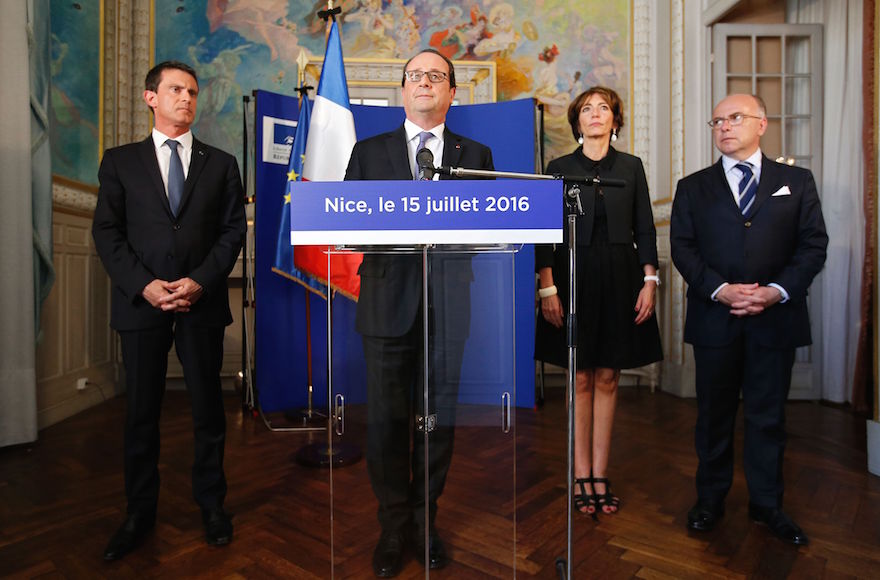 (JTA) — Speaking after a mass killing on Bastille Day in the coastal city of Nice, French President François Hollande said all of France is living under the threat of Islamic terrorism.

“After Paris in January 2015 and then St. Denis in November last year, and now Nice, in its turn, is touched, it is all of France that is under the threat of Islamist terrorists,” Hollande said in a pre-dawn broadcast Friday which the Elysee, the presidential palace, posted on social media.

He referred to deadly mass attacks in January on a satirical weekly and a kosher supermarket in Paris and in November on a concert hall in Paris, carried out by terrorists affiliated with Islamist terrorist groups.

A truck barreled into a crowd Thursday night during celebrations marking Bastille Day, the French independence day, killing 77 people. Reports said there might have been more than one attacker, and that the truck’s cab was filled with guns, explosives and grenades, according to local authorities.

The driver, who fired a gun into the crowd, was killed by return fire. An identity card in the truck cab bore name of a French Tunisian.

There was no claim of responsibility and security authorities were not yet describing the attack as terrorist, but Hollande made clear he believed that it was.

“The attack’s terrorist character cannot be denied,” he said. “It is clear we must do everything in order to combat against the scourge of terrorism.”

Hollande, who earlier Thursday had said a state of emergency in place since the earlier terrorist attacks would be lifted on July 26, said in his address after the attack that it would be extended three months.

Chabad Lubavitch News quoted the movement’s emissary in the city, Yossef Yitzschok Pinson, as saying that five local Jews were injured in the attack, one seriously. He did not know of any killed.