Nice’s defiant Jews to gather on Shabbat despite terrorist attack 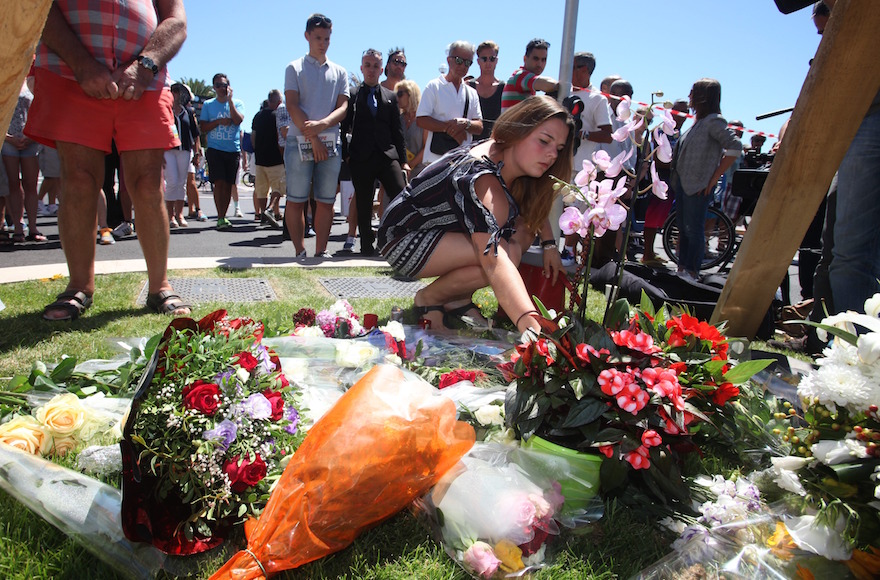 People visiting the scene and laying tributes to the victims of a terror attack on the Promenade des Anglais in Nice France, July 15, 2016. (Patrick Aventurier/Getty Images)
Advertisement

(JTA) — Nice’s Jewish community will hold Shabbat activities in a spirit of solidarity and defiance after a terrorist killed scores of people in the city in southern France.

A 30-year-old man drove a rented white truck through a crowded promenade in the coastal resort city on Thursday night shortly after the annual firework show on Bastille Day, BFMTV reported. He may have had accomplices who participated in the attack itself, the channel reported. Over 80 people were killed.

In addition to the fatalities, the attack resulted in severe injuries to at least 18 people and a few other people were lightly wounded. The identities of the victims have not yet been made known. At least five of the wounded are Jews, according to Pinson. French government officials reported that the death toll was at least 84 people.

“The truck left a trail of blood as it tore through the crowd,” said Pinson, citing eye-witness testimonies. One witness to the attack was “deeply traumatized by what she saw,” he said. “Body parts, people screaming, blood everywhere and very, very difficult sights.”

Unlike Paris, Nice had never seen a terrorist attack of the scale witnessed Thursday. “Although it is part of the reality of life in France that something like this can happen, it is shocking to see it in Nice,” Pinson added.

The driver, who has a criminal record involving violence but not terrorism, barrelled through the crowd that had gathered on the Promenade des Anglais to watch fireworks on France’s national day, according to the BFMTV television channel.

President Francoise Hollande said that an “attack with terrorist characteristics cannot be denied.” He added that France’s state of emergency, declared in November following a lethal series of terrorist attacks in Paris, may be extended and that some army reservists may be drafted. The driver, who fired a gun into the crowd, was killed by return fire. His name was not immediately released.

Nice, which is located on the coast of the Mediterranean Sea, is an international tourist destination that also draws hundreds of thousands of local French tourists in summer, as well as many European Jews who come to Nice because it has a permanent Jewish population of 25,000 with kosher shops and synagogues, in addition to the Chabad House.

But the summer crowd has not yet arrived, Pinson, the rabbi, told JTA. “They usually come in August, then there are far more Jews in town,” he said.

Following the attack, Jewish groups joined other faith groups, heads of state and international organizations in condemning the attack.

President Barack Obama said in a statement:  “We stand in solidarity and partnership with France, our oldest ally, as they respond to and recover from this attack. We know that the character of the French Republic will endure long after this devastating and tragic loss of life.”

Israelis, he added, “stand united with the people of France today” and “Israel is ready to help the French government fight this evil until it is defeated.”

European Jewish Congress President Moshe Kantor spoke of his outrage, as well as “pain and sadness,” following the attack.