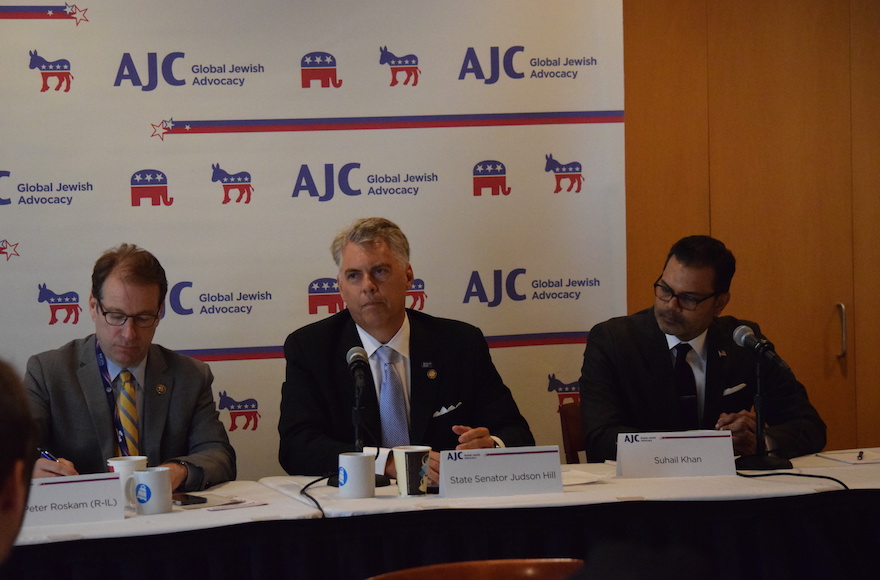 The American Jewish Committee held a panel on anti-Semitism that coincided with the beginning of the Republican convention. (Cleveland Jewish News)
Advertisement

CLEVELAND (JTA) — Judson Hill, a Georgia state senator, appearing on a panel on anti-Semitism coinciding with the Republican National Convention, was laying out his bona fides on combating the phenomenon.

“My faith is what gives me the motivation to stand with the Jewish people and with Israel,” he said Monday morning, and it is what led him to sponsor “anti-BDS legislation and anti-sharia legislation.”

Hill’s remarks were fleetingly awkward, coming during an event sponsored by the American Jewish Committee, which is among an array of Jewish groups — spanning left to right, Reform to Orthodox — on the record opposing “anti-sharia legislation.”

The panel took place blocks from where Republicans were gathering for their four-day nominating convention.

In part, the Jewish groups see the initiatives that seek to limit the use of sharia, or Islamic religious law, in the United States as undergirded by bigotry. But they also realize that there’s no way to “ban” sharia without shutting down Jewish religious courts and interactions between the religious and public squares on a host of matters, including certifying kosher inspectors and penalizing men who withhold divorce decrees from their wives.

Moreover, Hill was seated next to Suhail Khan, a leader in promoting Muslim-Jewish relations who has been the target of right-wing smears that he is an “agent of sharia.”

No one called out Hill directly — there was some silent wincing — and much of the focus of the panel was on the mission he shares with Khan, Rep. Pete Roskam, R-Ill., and the AJC in combating the movement to boycott, divest from and sanction Israel. (The Republican Jewish Coalition is honoring state legislators leading the anti-BDS push later this week, and the Jewish Federations of North America and The Israel Project are running similar events in Cleveland and next week for Democrats in Philadelphia.)

Later in the panel, Roskam singled out Khan for his willingness to buck even members of his own community by fighting BDS and partnering with pro-Israel groups and politicians. Khan has taken part in the Muslim Leadership Initiative of the Israel-based Shalom Hartman Institute, an interfaith effort that has roiled many in the Muslim community. Khan himself described what he termed the “mishegas” within the Muslim-American community over whether or not one should cooperate with Israeli outfits like Hartman.