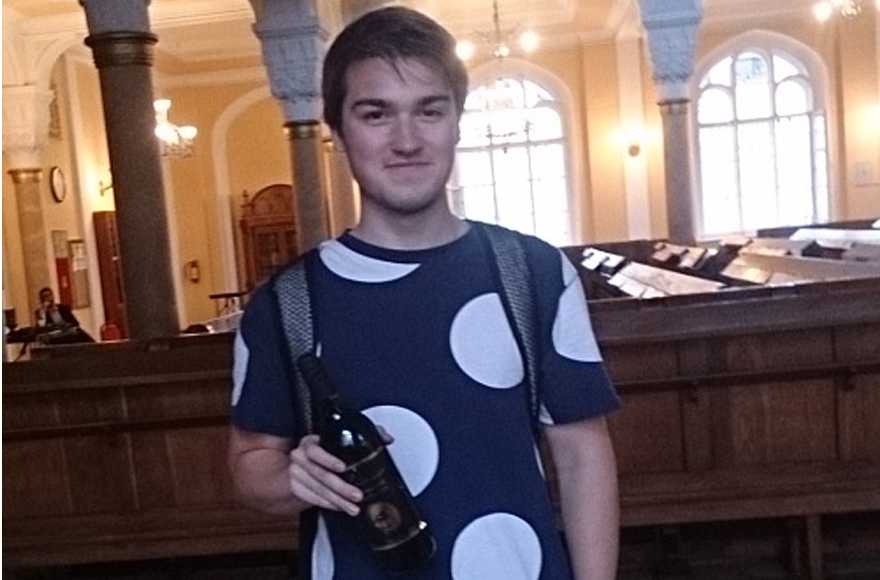 Daniel Gurevitch holding a bottle of wine he won for catching a Pokemon at the Gran Choral Synagogue of St. Petersburg in July, 2016. (Courtesy of Jewish News Petersburg)
Advertisement

As the Pokemon Go phenomenon grows, some institutions connected to European Jewry’s darkest hour have taken precautions against it.

The Auschwitz-Birkenau Memorial and State Museum in Poland has banned the addictive smartphone game, in which players viewing their environments through their device’s camera run in search of animated figures that the game’s application superimposes on the video feed in real time.

Citing the need to respect the memory of the dead, the U.S. Holocaust Museum in Washington, D.C., also asked visitors to refrain from playing the game, which has tens of millions of players since its release this month by the gaming giant Nintendo.

But in Russia, one Jewish institution with a troubled past is taking the opposite approach. In St. Petersburg, the city’s main synagogue and Jewish community center is doing its best to lure players to the building’s majestic interior by offering a bottle of kosher wine to anyone who catches a Pokemon there.

The first winner was Daniel Gurevich, a local Jewish man whose Pokemon hunt last week at the Grand Choral Synagogue of St. Petersburg was the second time he ever visited the place, according to a report Monday by Jewish News Petersburg. Shuttered by communists in 1930 and nearly destroyed by Nazi artillery during the vicious fight for Leningrad during World War II, it was rebuilt in the 1940s but was allowed to function only as a sham shul — a prop in the Soviet Union’s propaganda about its citizens nonexistent freedoms.

Gurevich told the news site that he came to the synagogue after its staff posted an invitation to Pokemon hunters on the synagogue’s Facebook page, which the local media quickly reported.

“I was Rollerblading nearby, I opened the news [on the smartphone] and saw that the synagogue wants me to come and look for Pokemons. Immediately I went and caught one,” he said. “It’s great that our synagogue is on the crest of fashion.”

A spokesperson for the synagogue told the news site that joining the Pokemon craze has roots in Jewish tradition.

“Any more or less knowledgeable person will tell you that the synagogue is no temple, it’s a meeting place where fun is permissible within reason and we see this in the Purim parties and children’s games,” the spokesperson said. “We very much want the youth to know the synagogue is a modern place, not a boring one.”

Unlike some synagogues, the Choral shul complex indeed functions as much as a community center as a house of worship. Completed in 1888 after eight years of construction, it is one of Europe’s largest synagogues, and has many rooms and event halls. The synagogue’s kosher cafeteria, which has a WiFi connection, has many young regulars who work on laptops or meet up at cultural events and Q&A sessions organized for members of the community.

The synagogue was closed down in 1930 for several years under orders from the communist government, which back then had a semi-official policy of anti-Semitism in addition to its restrictive approach to organized religion in general. Famously, KGB agents used to spy on the few Jews who dared go to shul during communism from a building opposite the Choral synagogue, where the KGB had a special window installed to survey the entrance door.