Greenblatt would be thrust into the post of presidential adviser on Israel if Trump wins the White House. (Uriel Heilman)
Advertisement

CLEVELAND (JTA) – Donald Trump’s campaign for the presidency rolled out its Israel Advisory Committee last week — no one noticed.

Blame the unrelenting news cycle, if you will: July 14 was the day of the hideous mass killing in Nice, France.

But also, his Israel Advisory Committee consists of exactly three Jews, including two who work for him.

Not much news here, move along.

Trump’s unusual campaign extends to its Jewish outreach, or rather his lack of Jewish outreach resembling anything that has come under that rubric in other campaigns.

Campaigns routinely distribute talking points to Jewish supporters and cultivate them as “validators,” folks who will appear on their behalf in the community and Jewish media making their case. But insiders say that Republican Jews who want to support Trump within their community have heard … crickets.

No talking points. No invitations to speak on his behalf to their communities. Calls by potential supporters and donors on behalf of daughters and nephews who want to volunteer go unreturned. (Like JTA’s request to the Trump campaign for comment on this story.)

Tevi Troy, a deputy secretary of health under President George W. Bush and a formidable Jewish community validator for past Republican candidates, said no one has been in touch this year, but that may be because he’s not on any of the relevant lists. Troy had opposed Trump during the primaries, but once it became clear in May that Trump would be the nominee, he said he was open to persuasion.

“I don’t think they’re targeting messages specifically to the Jewish community,” he said.

That could cost Trump significant advantages, both in much-needed funding for the campaign and in votes.

“There’s a fundraising component to Jewish outreach,” Troy said. “There are Jewish populations in certain swing states in 2004 that really helped” Bush win reelection, he said, referring to Ohio and Florida.

On the other hand, Troy said, how one validates candidates may be changing, with more folks going to social media to solicit information and opinions.

“The Jewish community is a vocal one, there are a lot of bloggers, a lot of tweeters” pushing out the pro-Trump message, he said.

Troy said Trump’s pick of Indiana Gov. Mike Pence as a running mate could reassure conservative Jews acquainted with Pence’s long history of friendship with Israel not just as governor but when he was in Congress. 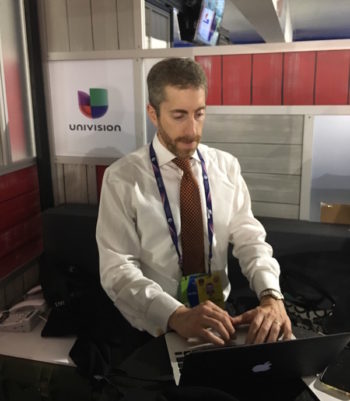 Perhaps the biggest Jewish validator of all, casino magnate Sheldon Adelson, was scheduled to attend a Republican Jewish Coalition event during the convention. But after pledging to contribute as much as $100 million to the Trump campaign, Adelson has yet to make a significant contribution nor convince other pro-Israel donors to chip in.

On Tuesday evening, Michael Mukasey, the Jewish attorney general under President George W. Bush, was scheduled to speak at the convention. Mukasey, who advised Jeb Bush’s presidential campaign, is known for his warnings about radical Islam’s spread in the United States — a message that jibes with Trump’s own broad-brush comments about Muslims.

The names on the campaign’s Israel Advisory Committee included Jason Greenblatt, for years the Trump Organization’s general counsel, and David Friedman, who also for years has represented Trump in bankruptcy cases. The third name was Richard Roberts, a pharmaceutical executive and a benefactor of a major yeshiva in Lakewood, New Jersey, who is also a Republican fundraiser.

Trump’s difficulties among Jews have much to do with his broadsides against minorities, the disabled and women; his refusal to disavow some of the anti-Semites who have attached themselves to his cause, and his back and forth on whether he would be “neutral” on Israel.

Their ambivalence was in evidence Monday morning at the Ohio delegation’s breakfast emceed by Josh Mandel, the state treasurer and a national Jewish GOP star. Mandel did not mention Trump’s name once, explaining at one point that he preferred to focus on close congressional races.

Mandel had invited Joan Synenberg, a judge whose husband, Roger, is a leader in the Cleveland Jewish community, to deliver the invocation before the program began.

“We praise a God who is black, white, red and every other color,” she said. “We seek that before we lash out, we reach out, we come together, whatever our differences,” describing what might be the antithesis to the Trump ethos.

“The challenge of making Trump’s case is primarily that there are a bunch of people shouting ‘Nazi’ and ‘shanda’ for no real reason,” he said, using the Yiddish word for an embarrassment.

Pollak, speaking to JTA via Twitter direct message, outlined a three-point strategy for overcoming complaints about Trump’s difficulties with minorities and allegations that he flirts with white supremacists.

“The argument for Trump among Jews boils down to: 1. (daughter) Ivanka Trump’s Orthodox conversion; 2. His long association with people like (Israeli Prime Minister Benjamin) Netanyahu; 3. A list of Hillary Clinton’s failings, plus the Democrats’ leftward shift,” he wrote.

Nick Muzin, a senior political adviser to Texas Sen. Ted Cruz, said Trump’s overarching message – that Clinton assumes office at America’s peril — was one that would resonate within the Jewish community and did not necessarily need tweaking.

“People are coming around to the fact that we want to defeat Hillary Clinton,” said Muzin, an Orthodox Jew who wrote an essay for JTA in support of Cruz for president. “The idea of the Democratic Party and where it’s drifted on Israel, and on the Iran nuclear deal — we can’t afford not to have a change.”

At a Trump fundraiser in the Hamptons, an area of tony seaside communities on Long Island a few hours from Manhattan, Muzin said he told donors this: “I’m seeing people say Donald may not be their first choice, but Donald is the choice we have considering where we are.”