Can a hobbled EU live up to its promise to combat anti-Semitism and racism? 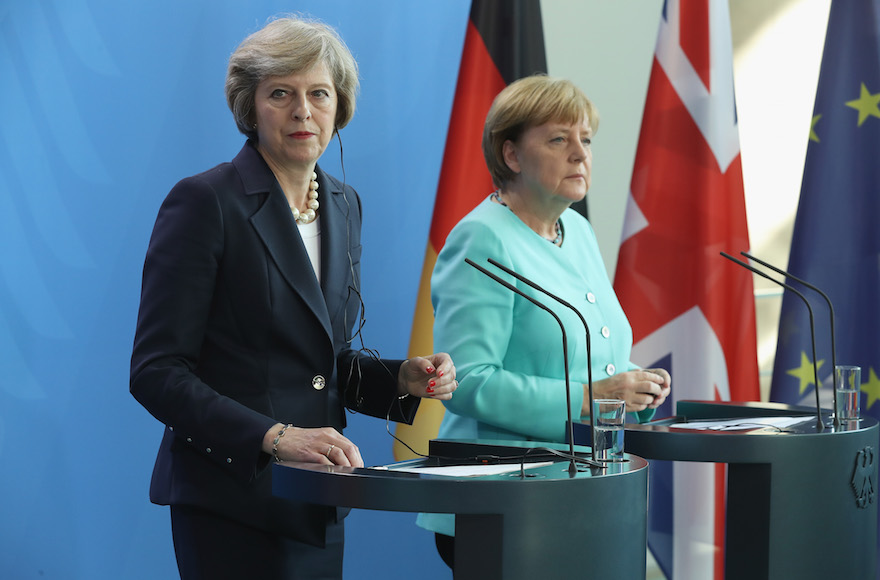 (JTA) — When the late Austro-Hungarian aristocrat Richard von Coudenhove-Kalergi attended church on Good Friday, his father would famously cause a scene, storming out when the liturgy came to the anti-Semitic exhortation “Let us also pray for the faithless Jews.”

Such protest was unusual in 19th-century Austria-Hungary, where anti-Semitism and other forms of racism were de rigueur. But the old count — a personal friend of Zionist legend Theodor Herzl — abhorred such biases in part because his wife, Richard’s mother, was Japanese.

Brought up in a multiculturalist home, Richard von Coudenhove-Kalergi made the fight against anti-Semitism a cornerstone of the Pan-Europa movement he founded in 1926. It was a major precursor of the European Union, which has evolved into a quasi-federal entity of 28 states with its own executive arm – the European Commission — parliament and judiciary.

Little wonder, then, that prominent Jews such as Albert Einstein and Sigmund Freud endorsed the nobleman’s pan-European vision from its inception. They saw it as an antidote to the nationalism and racist hate that culminated  in World War II and the Holocaust.

Determined to prevent the recurrence of such traumatic events, postwar European societies became open to adopting the revolutionary pan-European model of government.

Traditionally, Jews have been very supportive of the incarnation of von Coudenhove-Kalergi’s vision: the European Union, with its strong anti-racist rhetoric and agendas. But the growing influence of homegrown xenophobes, integration failures and Brussels’ perceived singling out of Israel for criticism have disillusioned many Jewish opinion shapers.

These conflicting Jewish attitudes were on display during the polarizing debate that took place in the United Kingdom over last month’s referendum on a British exit, or Brexit, from the European Union, according to Geoffrey Alderman, a historian and former member of the Board of Deputies of British Jews.

“There’s a belief that Jews are a very cosmopolitan, pan-European people whom one would’ve expected to show a large measure of support to the idea of the EU,” he said. But in Britain, “prominent Jews were in favor of exiting,” said Alderman, who himself was among the 52 percent of British voters in the June 23 referendum who supported leaving the bloc.

The British Jewish community’s institutions stayed neutral on the Brexit issue, whereas many Jewish intellectuals argued that the desire to leave was born of xenophobia and ignorance and risked unleashing a wave of nationalism and economic instability in the UK and beyond. The British-Jewish sociologist David Hirsh, in an op-ed for the Jewish News of London, highlighted the “freedom of movement, freedom to work where you choose and freedom of trade” afforded by the EU.

Strong statements about the need to fight anti-Semitism from some of the EU’s top officials have also shored up Jewish support.

Robert-Jan Smits, a director within the European Commission, said in 2011 that “present-day Europe arose from the ash of Auschwitz crematoria.”

And European Parliament President Martin Schulz said this year: “Jewish friends, we stand with you against those who spread hatred. Europe is your home today, every day and forever.’’

But the European Union’s Jewish critics say it is unable to back up the rhetoric with action — one reason, according to Alderman, why many Jewish Brexiters were open to leaving.

In the first few traumatized decades after World War II, anti-Semitism was “present but not spoken of” in the EU’s founding states in the continent’s west, Alderman said. “But anti-Semitism is a light sleeper and the EU has failed to create the political-social conditions” to keep it dormant, he said.

Millions of Muslims have done just that, but jihadists who grew within these communities have killed more than 300 people in terrorist attacks since 2012 alone — including 12 in three attacks on Jewish targets in France and Belgium.

Meanwhile, Eastern European EU member states such as Latvia, Lithuania and Hungary are celebrating the legacies of Nazi collaborators who participated in the Holocaust. Xenophobic parties from both east and west are riding a crest of popularity into the European Parliament, the legislative arm of the body set up to prevent such tendencies from reaching power.

Jewish Euroskeptics argue it would be easier to be deal with such challenges on a national level. EU supporters, including Hirsh, say these challenges require European societies to double down on federal ideals.

Far from ignoring the problem of anti-Semitism, say the EU’s defenders, EU senior officials have vowed to fight them head on.

“It is unacceptable that Jews are reluctant to wear their traditional clothes and display religious symbols in public because of fear,” Schulz said in January. “Jews are again killed because they are Jews. We will fight the demons of anti-Semitism, of ultranationalism, of intolerance.”

The European Union has taken some concrete steps to achieve this, including the unveiling in May of a code of conduct on online hate speech together with Facebook, Twitter, YouTube and Microsoft.

But in 2013, the EU eroded its own credibility with many on this issue by abandoning the only definition it had for anti-Semitism after pro-Palestinian critics objected to the inclusion of a clause about the demonization of Israel. Currently, the EU agency for fighting racism is on record as saying it is unable to define anti-Semitism and that the concept is not in need of a definition.

The decision to drop the working definition on anti-Semitism “damages the European Union’s credibility on its desire to fight anti-Semitic racism,” said Shimon Samuels, a British national based in Paris who heads the European office of the Simon Wiesenthal Center.

Back in Britain, a staunch advocate of the European Union — Rabbi David Rose of the Edinburgh Hebrew Congregation — drew parallels between Europeans’ ambivalence toward the EU to the Hebrews’ reluctance to trust God after he led them out of Egypt and through the Sinai Desert.

Eventually, Rose said, God gave up on the people he rescued and decided to build his Chosen People from their children born during 40 years in the wilderness.

“Perhaps in this analogy we are in the wilderness and our job is to raise a generation worthy of the Promised Land,” he said.

Brexit splits UK from Europe and Labour from its party leader

In post-Brexit Scotland, Jews warm up to leaving UK