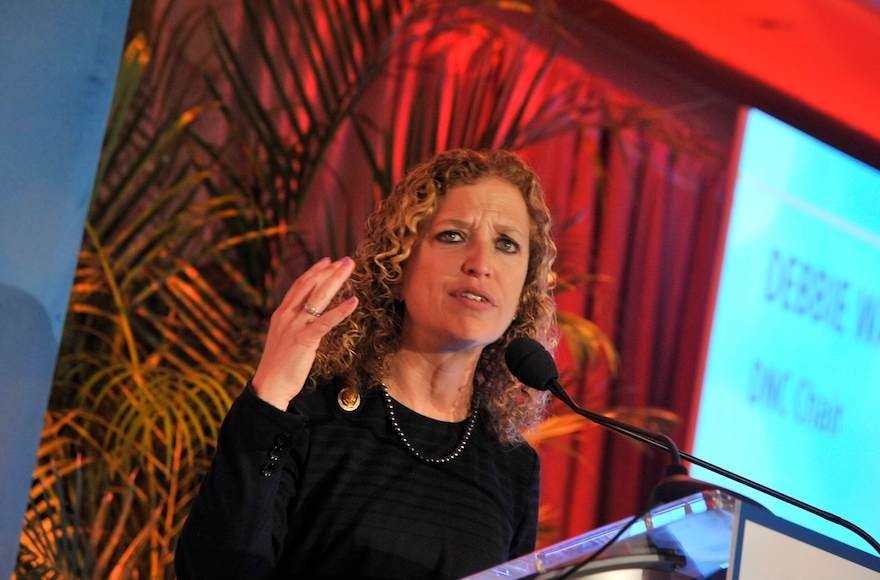 CLEVELAND (JTA) — Democrats blamed Republican nominee Donald Trump for what they depicted as burgeoning anti-Semitism in his party.

Rep. Debbie Wasserman Schultz, D-Fla., the chairwoman of the Democratic National Committee, on Wednesday said the Republican convention had brought to the fore an “anti-Semitic environment that Donald Trump embraces.”

“The anti-Semitism that is threaded throughout the Republican Party of late goes straight to the feet of Donald Trump,” she said.

Wasserman Schultz’s blunt assessment was a clear sign that Democrats intend to include anti-Jewish bias among the offenses they say Trump has made more prominent. On a conference call on the third day of the Republican convention in Cleveland, Wasserman Schultz, who is Jewish, joined Reps. Xavier Becerra, D-Calif., and Joyce Beatty, D-Ohio, who is black, in listing a litany of their grievances.

Wasserman Schultz included the controversy over Trump’s use of an image that juxtaposed presumptive Democratic nominee Hillary Clinton with wads of cash, corruption charges and a red six-pointed star resembling a Star of David. She also referred to his reluctant disavowal of the support of David Duke, the former Ku Klux Klan leader, and the Republican convention’s shutdown of comments on its YouTube livestream of the convention after anti-Semites flooded it with epithets when Linda Lingle, the Jewish former Hawaiian governor, addressed the hall.

“He shared anti-Semitic images on Twitter,” she said. “There is so much anti-Semitism in the Republican Party that on Monday night while Linda Lingle, the former gov of Hawaii who is Jewish was speaking, they shut down their live chat.”

Trump and his allies have forcefully rejected any charges of anti-Semitism, noting his closeness to his daughter Ivanka, who converted to Orthodox Judaism, and her husband, Jared Kushner, a close campaign adviser.

But Democrats are not ready to let go of Trump’s interactions with anti-Semites on social media.

Tuesday night, Clinton’s campaign chided Paul Ryan, the speaker of the U.S. House of Representatives, for standing by Trump after repudiating the reality star turned Republican presidential nominee for using the Star of David imagery.

The tweet from the Clinton campaign’s opposition research account, The Briefing, quoted Ryan, R-Wis., earlier this month decrying Trump’s use of the image.

“Look, anti-Semitic images, they’ve got no place in a presidential campaign,” The Briefing quoted Ryan as saying. “Candidates should know that.”

Trump posted the image, which had originated on the extreme right, on his Twitter account and a staffer scrubbed the image within hours, but Trump later said he regretted that action and would have preferred to defend the image – a quote The Briefing juxtaposed next to Ryan’s.

“I said, ‘Too bad, you should’ve left it up,” Trump said in the quote reposted by The Briefing.

“But @SpeakerRyan still endorses Donald Trump for president anyway,” The Briefing said, ending with the official hashtag for this week’s republican convention, #RNCinCLE.

The Briefing tweet went out in the evening, timed just before Ryan’s speech at the convention, on the day he steered the process for formally nominating Trump.

Ryan has endorsed Trump tepidly after wavering for months on his support. He has expressed reservations about Trump’s broadsides against minorities, his chafing rhetorical style and his foreign policy. Like many other speakers this week, Ryan focused his remarks more on what he depicted as the failures of President Barack Obama and Clinton, Obama’s first term secretary of state.

Ryan’s office did not reply to a request for comment.