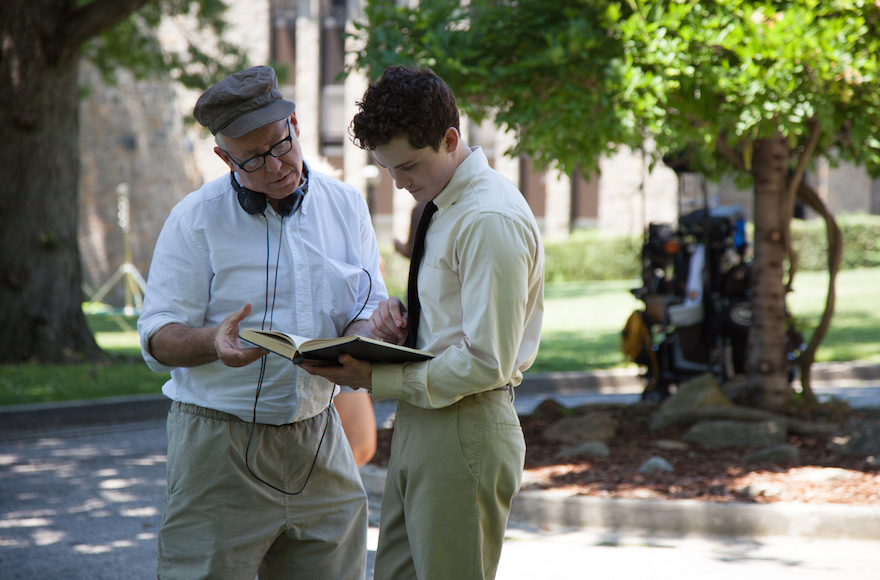 BOSTON (JTA) — James Schamus remembers the block he faced while writing the screenplay for Ang Lee’s 1994 film “Eat Drink Man Woman.” Creating the right voices for the film’s Taiwanese characters was not going well “and Ang Lee was getting very nervous.”

In a desperate effort to turn the script around, Schamus, who is Jewish, decided he would “just make them all Jewish in my mind,” changing the names to Jewish ones during the writing and then changing them back to Chinese names afterward. The technique succeeded; the result was a modern cinematic classic.

That capacity to bridge cultural differences while working within one’s own idiom is evident in “Indignation,” Schamus’ adaptation of Philip Roth’s 2008 novel. The film traces the effects of subtle institutional anti-Semitism on a “nice Jewish boy” and stellar student from New Jersey attending a conservative, Christian-influenced college in the Midwest in 1951. In his directorial debut, the veteran screenwriter (“The Ice Storm,” “Crouching Tiger, Hidden Dragon”) and producer (“Brokeback Mountain”) manages to remain empathetic to all his characters, even the most seemingly anti-Semitic one.

“Indignation,” which was screened at the Sundance Film Festival in January, arrives in theaters July 29. Schamus, along with star Logan Lerman, sat down with JTA in Boston on July 18.

Roth’s novel is set in the middle of the Korean War. Marcus Messner, 19, a bright Jewish kid from Newark, flees his neurotically controlling father, a kosher butcher, by transferring from a local college to the fictional Winesburg College in Ohio. (Through not explicitly autobiographical, “Indignation” draws from Roth’s parallel experience transferring as a sophomore to Bucknell College in Pennsylvania from the Newark campus of Rutgers University.) Though serious and studious, Marcus finds himself in a strange land. Obligated with other students to attend chapel regularly, he is newly constrained and cornered by completely different forces than those that forced him out of Newark.

At Winesburg, Marcus also encounters the beautiful but troubled non-Jewish beauty Olivia Hutton. Living somewhat dangerously for the first time, Marcus is lured by another Jewish student into dodging chapel attendance and by Olivia into dark sensual corners, leading him eventually to clash with Winesburg’s patrician dean, Hawes D. Caudwell. The dean’s insinuating and vexing cross-examination effectively draws out Marcus’ indignation and defines his fate. (The novel is explicit about the nature of that fate early on, but the film does not reveal it until the very end, so we’ll avoid the spoiler here.) 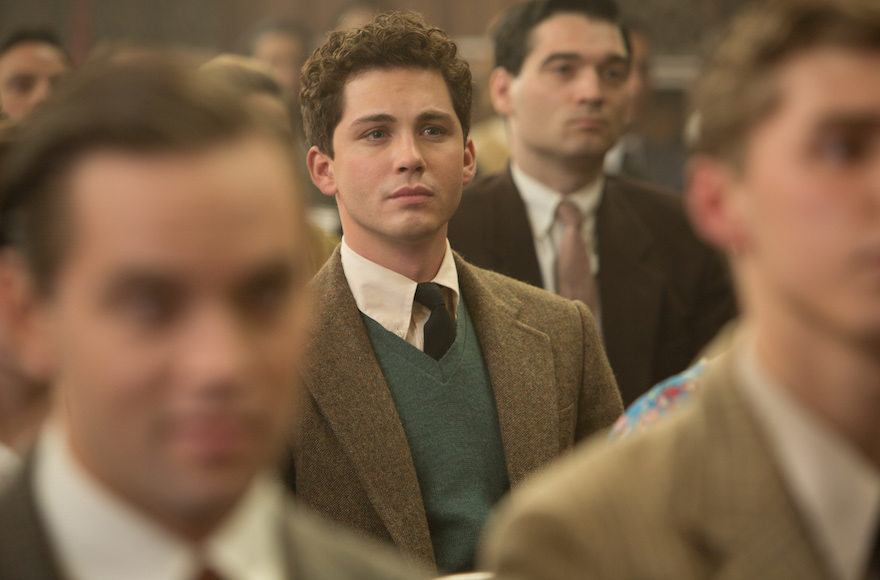 Logan Lerman in a scene from “Indignation,” a film adaptation of the Philip Roth novel. (Alison Cohen Rosa)

A central but daringly extended scene in the film depicts the charged encounter between Marcus (a penetrating and simmering performance by Lerman, the boyish heartthrob from the “Percy Jackson” adventure series and the 2012 film “The Perks of Being a Wallflower”) and the dean (played tautly and convincingly by Tracy Letts, also a Tony Award-winning playwright). Schamus’ script manages to expose the subtly prejudicial indictment by the very non-Jewish dean of the Jewish kid, demonstrating the dean’s sincere admiration as well as his scorn.

Director Schamus, who grew up in a strongly identified Jewish family in Southern California and now lives in New York, and 24-year-old star Lerman, who also is Jewish and was raised in Beverly Hills, remain empathetic to the dean character, while acknowledging the systemic if subtle form of anti-Semitism he embodies.

For Lerman, Caudwell’s version of anti-Semitism doesn’t crudely exhibit “hostility or ill intentions,” but rather “a sincere prejudice.”

“Caudwell doesn’t get up in the morning and say ‘how can I hurt the Jews?’” Schamus says. “He thinks he’s doing a good thing – ‘we’ll expose them to the Christian part of the Judeo-Christian tradition and it’ll be good for everybody. It’s a great country and we can accommodate these people as long as they toe the line.’”

Schamus says he was drawn to Roth’s novel by the appeal of the characters, including Caudwell. That is not to say that Schamus condones Caudwell’s subtle version of anti-Semitism, but places it in the context of a complex of qualities demanding more nuanced assessment. For Schamus, Caudwell responds warmly and enthusiastically to Marcus “knowing that this is the smartest kid who’s walked in there in a long time,” yet still can’t keep himself from pursuing an insinuating cross-examination of him.

In his explicitly autobiographical 1988 work “The Facts,” Roth recalled how his time at Bucknell constrained both his Jewish identity and artistic sensibility. In his student writing he set out to prove “that I was a nice boy, period,” he wrote. “The Jew was nowhere to be seen; there were no Jews in the stories, no Newark, and not a sign of comedy. … I wanted to demonstrate that I was ‘compassionate,’ a totally harmless person.”

In portraying Marcus, Lerman echoes the spirit of the young, decent, inhibited author ready to ripen into the funny, indecent, vivid one.

Schamus says that among those expressing the strongest appreciation of the film are young people of color who relate to its portrayal of the subtleties of prejudice. And, while many barriers have been removed, minority students at colleges and universities continue to identify its effects.

In somewhat idiosyncratic cinematic terms, the film distills Roth’s view of how justifiable fury sprouts, how that sense of indignation can simmer over time and how it can eventually boil over.