Bernie Sanders wants his delegates to back Clinton. They’re not listening. 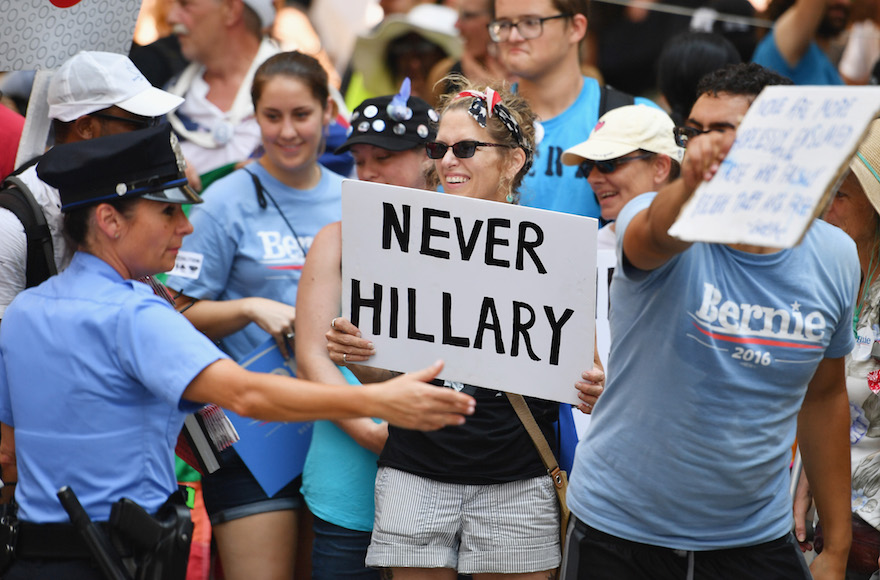 PHILADELPHIA (JTA) — Bernie Sanders’ delegates are going to raise hell on the floor of the Democratic National Convention, his own wishes be damned.

That’s the message a coalition of Sanders delegates has sent on the first day of the convention, which began here Monday afternoon.

When presumptive Democratic presidential nominee Hillary Clinton takes the podium on Thursday, unless things change, she can expect cheers from most of the crowd, but stonewalling from a vocal minority.

Sanders delegates say they feel lied to by the party. Leaked emails from the Democratic National Committee showing favoritism to Clinton, they say, show that the party was fighting Sanders all along. And they’re irked that instead of acknowledging their voices by choosing a more progressive running mate, Clinton tacked to the center and chose Virginia Sen. Tim Kaine.

Solomon told reporters Sunday and Monday that his network is planning at least three separate actions at the convention this week. It’s going to protest the speeches by Kaine and Clinton either by having delegates walk out, turn their backs or simply remain silent. And on Wednesday, the group is planning to protest the Kaine nomination by officially submitting an alternative candidate for vice president.

Solomon is aware that the vice presidential fight is symbolic.

“We understand Tim Kaine will be the vice president,” he said. But on Sunday, he told reporters that Sanders delegates would have preferred Massachusetts Sen. Elizabeth Warren, a progressive firebrand, or Ohio Sen. Sherrod Brown. 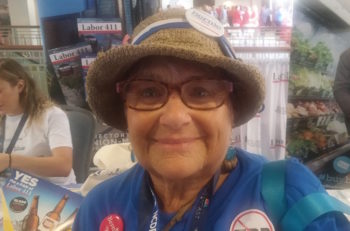 Jennifer Fontaine is a Bernie Sanders delegate who lived in Burlington, Vt., for 35 years. (Ben Sales)

Sanders, for his part, has encouraged his supporters to throw their weight behind Clinton. He has criticized Kaine in the days since his selection Friday, saying “his politics are not my politics,” but in a speech Monday to delegates, he earned boos by telling them to vote for Clinton and Kaine in order to defeat Donald Trump, the Republican nominee.

But as much as it’s a protest against what Solomon has called the “corporate” Democratic establishment, the Bernie Delegates Network’s plans are an explicit rebuke to the idea that delegates need to line up behind whatever their candidate says. The message of Sanders’ campaign, say some delegates, is that citizens and activists should fight for the causes they believe in, and that the grass roots should determine the direction of movements, not leaders.

At the convention, many Sanders delegates wore shirts reading “Bernie for president” more than a month after he dropped out — a sight not seen at the Republican National Convention among backers of Sen. Ted Cruz, that party’s runner-up. Several Sanders supporters wore green felt pointed hats, meant to show that Sanders was the Robin Hood of the United States.

“My job is to make sure the wishes of my delegates are heard and that their opinions are heard,” said California delegate Karen Bernal. “They have never been a group to take marching orders. They’re extremely independently minded.”

Sanders delegates in their objection to the Kaine selection say he pulls Clinton further from their positions due to his support for free trade and a stance on unions they deem unfriendly. Warren or Brown, by contrast, could have been seen as a validation of Sanders’ platform.

And Sanders supporters in particular take umbrage at the leaked emails, which describe strategies to throw off Sanders’ candidacy. One email chain suggests that Sanders avoided acknowledging his Judaism and that perhaps the DNC could hurt his campaign by stressing that he doesn’t believe in God (he does). 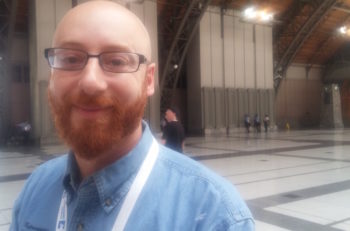 Jonathan Singer is a Sanders delegate from Colorado. (Ben Sales)

“They have no clue about what Judaism means,” said Kansas delegate Andy Sandler, who is Jewish. “We’re not a monolithic bloc. They’re copying riffs from the Republicans. They love subterfuge.”

That’s why some Sanders delegates plan to vote against Clinton in November, whatever the consequences. Solomon, a Californian who will not vote for Clinton, said that Sanders supporters in solidly “blue” states that will almost certainly vote Democrat don’t need to worry about closing ranks around Clinton.

But other delegates oppose protests on the convention floor and say a vote for Clinton is necessary, either out of party loyalty or because the specter of Trump is so unthinkable to them. While Sanders will not be on the ballot, they believe that his principles and the movement he created will continue after this election.

“The Democrats, we have to come together,” said Connecticut delegate Beverley Brakeman. “People who are Bernie people who may not like Hillary need to figure it out. To me, [Trump] is a far scarier option.”

There are also concerns that protests on the floor will make the Democratic convention look like the Republican confab in Cleveland last week, where fissures showed throughout the week. Texas Sen. Ted Cruz spoke from the podium but did not endorse Trump, drawing boos. Cruz delegates also mounted an abortive protest from the convention floor to change the party rules so Trump would not be nominated.

“I think we should look better than the Republicans at their convention,” said delegate Denise Gladue, also from Connecticut. “We should respect Bernie’s decision to step down. He told us to vote for Hillary. We should vote for Hillary.”