For Jews of Nice, terrorist attack came as no surprise 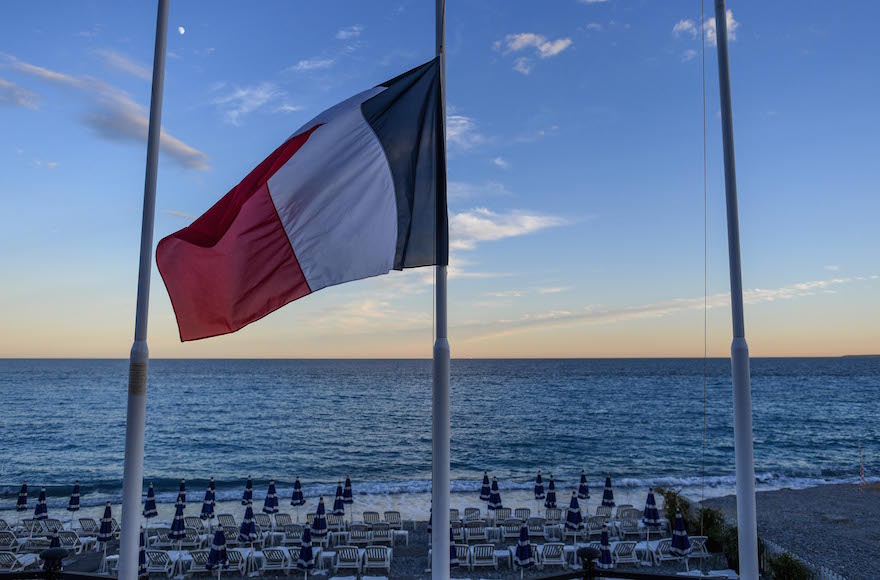 A French flag flies at half mast at an empty beach on the Promenade des Anglais in Nice, France, July 15, 2016 in Nice, France. (David Ramos/Getty Images)
Advertisement

AMSTERDAM (JTA) — To the millions of tourists who visit Nice annually, the city in southeast France is an ultimate holiday destination that offers inviting beaches and luxury casinos, stunning architecture and world-class museums.

Sandwiched between the Maritime Alps and the Mediterranean Sea, Nice is France’s largest tourist destination after Paris, with 5 million arrivals each year and the country’s second largest domestic airport. Nice sees $1.6 billion in annual tourism revenue — 40 percent from its region known locally as Côte d’Azur and abroad as the French Riviera.

But Nice has a dark side, as demonstrated in the terrorist attack of July 14, when a Muslim extremist killed 84 people on the Promenade des Anglais by plowing his truck through the crowds gathered for a fireworks show on France’s national holiday, Bastille Day. After the attack, thousands of tourists checked out hurriedly from hotels that had not had occupancy issues in years.

The attack came as no surprise to many locals, including many of the city’s 20,000 Jews, who for years have been the targets of anti-Semitic attacks and harassment by members of a growing minority of fundamentalists from within the city’s large Muslim population.

“The only Jews you see walking around with a kippah are the foreign tourists,” said Chalom Yaich, a caretaker at the Michelet Jewish community center and synagogue. One of Nice’s dozen-odd shuls, Michelet is located next to a car repair shop at the northern downtown area about a mile and a half from the glitzier beachfront area.

“We locals have stopped wearing it years ago or covered it with a hat for safety,” said Yaich, 53.

He was considering immigrating to Israel before the attack, he said, and is even more inclined to do so now.

“Many have left already because Nice is especially affected by France’s problem with Islam,” Yaich said, noting that its young Jews are especially prone to leave, either for Paris or Israel.

“We have an aging local population with an average age of 50 or 60,” he said.

One Jew, Reymonde Mammane, was killed in the attack.

The attacker, who was shot dead by police while carrying out the rampage, was identified as a Tunisian immigrant, Mohamed Lahouaiej-Bouhlel. Although Lahouaiej-Bouhlel, 31, was a petty criminal with no known links to terrorism and little apparent interest in religion, the Islamic State terrorist group has claimed responsibility for the attack, which French police believe involved several accomplices.

Local Muslim leaders denounced the attacks and organized a blood drive for survivors, saying the attacker was hardly representative of their community. Yet several other terrorist cells have emerged from the community in recent years.

In February, a Muslim man with suspected terrorist ties stabbed three soldiers outside a Jewish community center in Nice. Like other Jewish potential targets throughout France, the center has been under armed guard since January 2015, when four Jews were killed by an Islamist at a kosher supermarket near Paris. The following month, Nice police raided several homes of alleged Islamist terrorists who were “in advanced stages” of preparing an attack, prosecutors said at the time.

In recent years, Nice was among the five most troublesome areas listed in the annual report of the Paris-based SPCJ, a watchdog group on anti-Semitism, with an average tally of 15 to 20 violent incidents per year.

In relative terms, Jews in Nice are twice as likely to experience such an attack than their coreligionists in Marseille, a nearby city with 220,000 Muslims and 80,000 Jews that sees approximately 25 to 35 physical anti-Semitic attacks annually, according to SPCJ.

The difference is felt on the ground, according to Yves Kugelmann, the Swiss editor-in-chief of the Tachles Jewish weekly, who is among hundreds of non-French Jews with pieds-à-terre in and around Nice.

“There is more tension and apprehension in Nice than in Marseille, where even despite all the trouble we’ve seen in recent years, you still also have cafes with a mixed clientele of Jews of North African descent and Muslims from the same place,” said Kugelmann, who was in Nice when the attack happened.

“It didn’t fundamentally change things for the local Jewish population because, firstly, in France today terrorist attacks are no longer surprising,” he said, “and secondly because it wasn’t aimed at Jews.” Hours after the attack, Yossef Yitschok Pinson, the rabbi of Nice’s Chabad House, told JTA that synagogue services and community events would go on as planned in Nice.

Amid growing concern about Islamism, Nice has become a bastion for the French far right, where Marion Maréchal-Le Pen, a niece of party leader Marine Le Pen, garnered a whopping 34 percent of the vote in the second round of voting in the 2015 regional elections, losing by fewer than 10 points to another right-wing candidate, former Mayor Christian Estrosi.

In Nice, the French Jews live among Arabs in and around the city center, between the Jean-Medecin neighborhood and Gambetta. And while this creates more familiarity than in other French cities with Muslim and Jewish enclaves, it also generates more friction than in Marseille, where Jews and Arabs interact but live mostly apart as a result of Jewish migration to the suburbs in recent decades.

Many Jews also live in the affluent towns around Nice and in pricey villas atop the lush cliffs overlooking the Nice Cape east of the city, not far from the borders of the Principality of Monaco, located approximately eight miles from the city. And while they will sometimes attend services at the Chabad synagogue or the Ashkenazi shul, “they are not exactly the synagogue crowd,” Kugelmann said.

Traditionally a cosmopolitan and tolerant port city near the Italian border, Nice has had a Jewish presence since at least the 12th century, according to Leon Alhadeff of Sefarad, a French organization promoting Sephardic culture.

“It drew them because it was a crossroads of cultures,” he wrote on the Sefard website.

Ironically, perhaps, it is now drawing Islamists for the same reasons, according to Philippe Granarolo, a writer and historian who wrote about the truck attack in the Le Figaro newspaper.

The city was targeted, he wrote, because Nice, “by far the best-known French destination in the world after Paris, for over a century has symbolized France’s touristic appeal; Mediterranean culture and openness to the other banks of” the Mediterranean Sea.