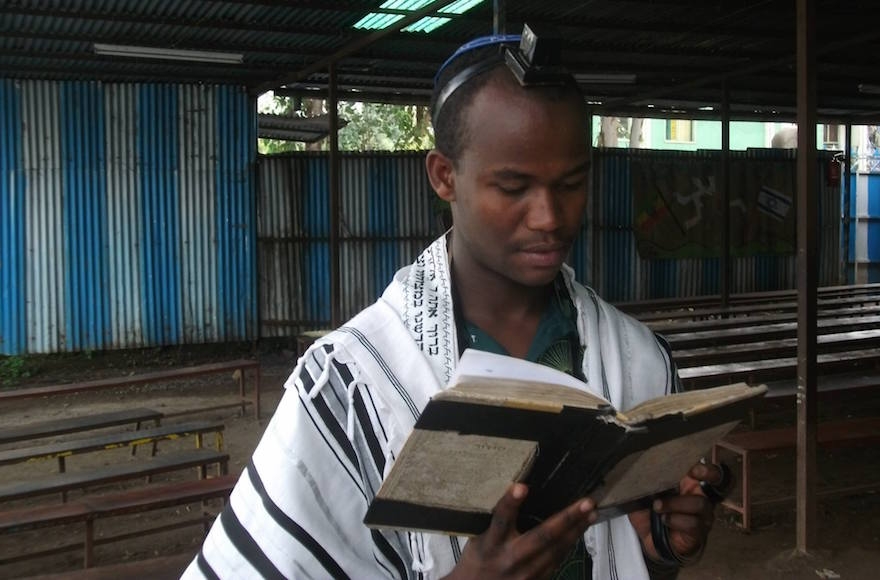 Demoz Deboch praying in the synagogue at the Jewish compound in Gondar, Ethiopia in 2013. (Facebook)
Advertisement

NEW YORK (JTA) — We met Demoz Deboch at services in Gondar, Ethiopia. It was Friday night in June of 2013 and we were surrounded by hundreds of white-clad Falash Mura, the descendants of Jews who were now living a Jewish life in neighborhoods near the Jewish compound set up by the American Jewish Joint Distribution Committee and the Jewish Agency for Israel.

Women stood and blessed candles chanting in Hebrew and Amharic. The service began; African melody but Hebrew words. White robes, white tzitzit and beautiful, delicate black faces. I sat among the young men. This was a dramatic moment. Israel had announced that the last Falash Mura would be flown on eagles’ wings to Israel, the end of an almost 3,000-year-old Jewish community. We were there to witness the event, to cheer on these men, women and children who were so passionately committed to Israel — to returning home.

I turned to this young man, Demoz, and spoke to him in Hebrew.

“When exactly are you leaving?” He turned his head as if in shame and replied, “Ani lo b’rishima,” I am not on the list. I was confused.

What list? And how could this young man, who wears a kippah, speaks beautiful Hebrew, keeps kosher and teaches the young kids at the compound — how could he not go to Israel? I turned to the young men on the other side and asked the same question. The same response all around me: None were “on the list.”

And so I learned a painful truth. The visiting Jewish leaders who had come for the ceremonial closing of the Jewish school were being thanked by students, teachers and youth leaders who were being left behind. And the health center, the food kitchen – even the Torah – were all being taken away, leaving 6,000 stranded Falash Mura in Gondar — as well as another 3,000 attached to the Jewish compound in Addis. 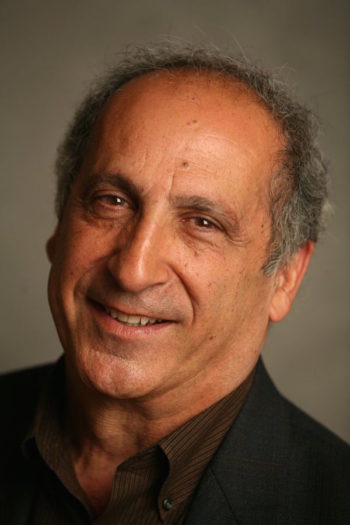 The Falash Mura are a subset of Ethiopian Jewry. Over the last 100 years, under economic and social pressures, some Jews converted to Coptic Christianity. Others married Christians or Muslims. While other Ethiopian Jews were making their epic migration to Israel, the Falash Mura’s Jewish lineage — a matter of biology, not identity — was considered suspect.

In the case of Demoz, his maternal line was Jewish, but his father was not in town when the Jewish census took place, so the family was not on the list maintained by the Population and Migration Authority of Israel’s Interior Ministry. By the time that was rectified, Demoz had “aged out” and as an adult was no longer listed with his family.

Demoz was a child when his family sold its land in the rural village where he was born to join the Jewish community in Gondar. Families from around the province with rich memories of Jewish customs and celebrations handed down from their grandparents flocked to the Jewish community on the path of aliyah. They left everything they had in the village and then had no place to which they could return. Always considered outsiders in Ethiopia — the derogatory name Falasha suggests “exile” or “transient” — they felt the pull of their Jewish faith. Growing up in the compound, Demoz only knew his Jewish life, his Zionist schooling, his Jewish soul. The idea that he was now rejected by Israel and the Jewish community that had nurtured him his whole life was unfathomable.

And so began a campaign by the Ethiopian leadership in Israel headed by the activist Avraham Neguise, now a member of Knesset, and supported by empathetic Israelis and American Jews. Demoz and I corresponded the past three years. We offered to bring him to America with his two closest friends to help him formally convert to Judaism and resolve any lingering doubts, to study at college here and then go to Israel from America. He refused. He could not abandon his family and community, saying that when he leaves Gondar, it will only be to go to Israel. Rabbis in White Plains, New York, helped raise money among their congregants to fund the Jewish compound and keep it open. The Torah stayed. Ethiopian Jews in Israel, supported by their allies, demonstrated.

Meanwhile, months and then years passed with no resolution. But Demoz stayed faithful, a true believer that the Israel of his dreams would not fail him. He enrolled in college with the hope of joining the Israeli Foreign Ministry and becoming an ambassador for Israel. He made Jewish friends around the world on Facebook, making his simple request: Bring me home.

After over two years passed, a miracle seemed to unfold. In 2015, the commission appointed by Prime Minister Benjamin Netanyahu to consider the plight of the 9,000 remaining Falash Mura of Ethiopia recommended that they be brought home to Israel. In November, the Israeli Cabinet unanimously agreed. Demoz was ecstatic, making plans to reconnect with friends and family in Israel, to sell the little he had and go to Israel, join the army and finally be a true Israeli.

Then, in February, Netanyahu’s government announced, citing budget reasons, that there would be no aliyah, no more Jews from Ethiopia. The incredulity and despair, in Israel and in Ethiopia, was huge. As one member of the Knesset, Revital Swid of the Zionist Union, angrily reacted: “How can we tell soldiers from Ethiopia that they’re good enough to sacrifice their lives but not good enough to reunite with their relatives?”

And there was a darker irony. At the very moment Demoz was told he was not good enough to come to Israel, Natan Sharansky – himself a Russian Jew brought to Israel along with a million Russians, many of whom knew nothing of Judaism or even were not in fact Jews — invited the Catholic descendants of Spanish Jews who converted over 500 years ago to make aliyah. But not Demoz of Gondar.

Demoz and I Skyped and, to my utter amazement, he was his optimistic and joyful self, believing against all the evidence that he would soon be making aliyah. I was filled with anger and fury. Demoz was serene, refusing to waver in his faith or believe that Israel would abandon him. And he has made believers of us.

That is why we, an ad hoc group of American rabbis and Jewish leaders, brought Demoz and his close friend Gezi Derebe to America this month. They will tour the East Coast and California speaking at conventions and camps while meeting with often recalcitrant Jewish leaders. Some 50 rabbis and leaders have also launched a petition campaign to give voice to the Falash Mura community left behind and tell this very simple story of “ahavat Yisrael,” the love of Israel, and the unwavering belief that the ingathering of the exiles means that Demoz and Gezi and their families and friends will soon be brought home on eagles’ wings, just as the Torah they read every week promises.

(David M. Elcott is the Taub professor of practice in public service and leadership at the Robert F. Wagner School of Public Service of New York University.)