Democratic convention’s second night was all about the (Jewish) women 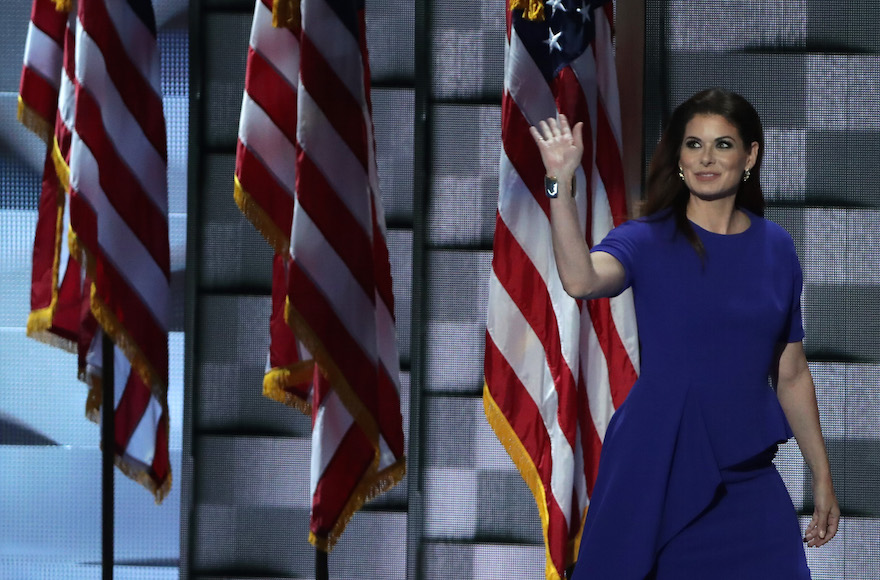 PHILADELPHIA, PA - JULY 26: Actress Debra Messing arrives on stage to deliver remarks on the second day of the Democratic National Convention at the Wells Fargo Center, July 26, 2016 in Philadelphia, Pennsylvania. Democratic presidential candidate Hillary Clinton received the number of votes needed to secure the party's nomination. An estimated 50,000 people are expected in Philadelphia, including hundreds of protesters and members of the media. The four-day Democratic National Convention kicked off July 25. (Photo by Alex Wong/Getty Images)
Advertisement

Debra Messing, Lena Dunham, Idina Menzel, Sen. Barbara Boxer and two women with close familial ties to Judaism — Madeline Albright and Elizabeth Banks — were among those taking the stage on the second night of the Democratic National Convention to hammer home the evening’s theme, the rise of women.

The night was very much about the glass ceiling Hillary Clinton cracked after Bernie Sanders cleared the way earlier in the evening, asking for a suspension of rules so his erstwhile rival could be named the nominee by acclamation.

The convention was supposed to be a triumph for Wasserman Schultz, the Jewish congresswoman from Florida who backed Clinton in the 2008 race until Barack Obama secured the nomination. She had been building to this moment since she assumed the chair of the Democratic National Committee in 2011. But she was ousted over the weekend after a dump of emails showing animus by Wasserman Schultz and her staff against Sanders and his campaign.

The relief that an obstacle to party unity was removed was evident as soon as Donna Brazile, Wasserman Schultz’s interim replacement, took the stage to loud cheers.

“As the incoming chair of the DNC, I promise you we will have a Democratic Party you can be proud of!” Brazile said.

Although Bill Clinton’s speech about his wife’s personal and professional accomplishments was the centerpiece of the session, more women than men took the stage. Toward the end, Hillary Clinton herself emerged via video feed after “shattering” a montage of the 44 male presidents.

“I can’t believe we just put the biggest crack in that glass ceiling yet,” she said to applause.

Messing, the “Will & Grace” star, introduced a segment on how Clinton, as senator from New York, helped bring relief to affected New Yorkers and first responders after the Sept. 11 attacks (Messing has featured in Clinton campaign outreach to Jewish women).

Emceeing was Elizabeth Banks, the director-actor who began practicing Jewish ritual after marrying Max Handelman, a sports writer, in 2003. Banks unveiled a video of a celebrity-studded a cappella version of Rachel Platten’s “Fight Song,” which has become the Clinton campaign’s theme. Included were cameos by Menzel, the Broadway star, and director Rob Reiner.

Also speaking was Sen. Barbara Boxer, who noted that her grandchild is Clinton’s nephew (Boxer’s daughter, Nicole, was married for a time to Clinton’s brother, Tony Rodham). Her intimacy with Clinton allowed Boxer an aura of sisterly defense. “The right wing has thrown everything at her – not only the kitchen sink, but the stove, the refrigerator, and the toasters, too,” she said. “And guess what? She’s still standing!”

(At least Boxer didn’t repeat her characterization last month of Clinton as “WASPy,” a mangled attempt to make the case that Clinton had a certain midwestern authenticity.)

Sen. Chuck Schumer also played a sibling-like role: the big, tender brother. He was the senior New York senator to Clinton for her eight years. “Now, I’m from Brooklyn,” he said. “It’s in our blood to sniff out empty bravado. There’s a lot of that in politics, but there’s not an ounce of it in Hillary Clinton. When she tells you something, take it to the bank.”

Albright, the first woman secretary of state, noted her commonality with Clinton and, in calling out Republican nominee Donald Trump, pointedly noted the welcome she and her family received in the United States as refugees from Czechoslovakia’s communist government.

“She knows that safeguarding freedom and security is not like hosting a reality TV show,” said Albright, who was raised Catholic but learned as an adult that her parents were Jews. “It is a complex, round-the-clock job that demands not only a steady hand and a cool head, but also a big heart. You are not just representing yourself, you are there for all of us.”

Lena Dunham, the creator of the HBO hit “Girls,” appeared with actress America Ferrara. Dunham talked about being a survivor of sexual assault, and said of Trump, “We don’t accept hatred as the norm in our communities. Why would we accept it in the Oval Office?”

In the keynote speech, Bill Clinton spoke of his wife’s successful negotiation of a ceasefire ending the 2012 war between Hamas and Israel, and her role in bringing nations — including recalcitrants like China and Russia — into the Iran sanctions regime.

He also mentioned – without naming her – a Jewish woman who had a lasting influence on his wife’s life. As Arkansas First Lady, he explained, Hillary Clinton had fallen for an Israeli program known as HIPPY (Home Instruction for Parents of Preschool Youngsters) that enlists mothers of toddlers in teaching reading skills and sharply boosts literacy. Mrs. Clinton invited HIPPY’s founder, Avima Lombard, to the state to train preschool teachers.

“Next thing you know, I’m being dragged around all these preschool graduations,” Bill Clinton said.