On Dems’ national security night, Israel is notable for its absence 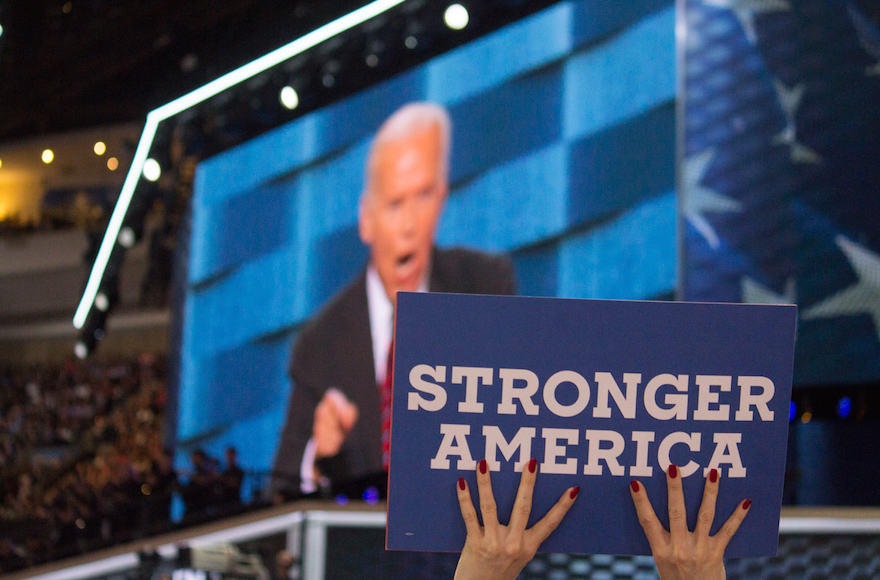 PHILADELPHIA — The speakers mentioned ISIS. They mentioned Iran. But there was nary a peep about another big I: Israel.

“In this election there is only one candidate who has the experience, temperament and judgment to be commander-in-chief. That’s Hillary Clinton,” Panetta said, in a speech punctuated by chants of “No more war.” “This is no time to gamble with our future. America faces flash points and threats around the globe. We need a president who’s strong, smart and courageous.”

Several speakers said she took a vital role in the decision to kill Osama Bin Laden. They praised her for her role in imposing global sanctions on Iran and building toward the Iran nuclear agreement. Obama said Clinton will “finish the job” of destroying the Islamic State terror group.

This is where, during previous conventions, speakers might have assured the crowd that Clinton would safeguard relations with America’s closest Middle East ally, Israel. Wednesday merited no such sentence. It was a stark contrast to the Republican convention last week, where positive mentions of Israel were surefire red meat for the crowd. Both halves of the GOP ticket, Donald Trump and Mike Pence, threw in an Israel line to cheers and applause.

(Clinton’s negotiation of a cease-fire in Gaza did come up in a video Tuesday and again Wednesday. In the Wednesday mention, the word “Israel” didn’t make it in. And Bill Clinton mentioned an Israeli education program in passing Tuesday.)

Both parties still declare support for the Jewish state,  but that support increasingly means two different things. Among Republicans, it’s a hawkish stance on Israel that no longer endorses a two-state solution and says the U.S. should refrain from dictating Israel’s borders “or other terms.” Among Democrats, it’s a dovish position that focuses on efforts to reach Israeli-Palestinian peace.

Among Republicans, support for Israel means opposing the Iran deal like Prime Minister Benjamin Netanyahu’s government, on the reasoning that it will enrich regional terrorists and leave Iran’s nuclear infrastructure intact. Among Democrats, support for Israel means backing the Iran deal, like some of Israel’s security officials, on the reasoning that it distances Iran from a nuclear weapon and averts regional war.

Some Democrats want their party to focus more on supporting Palestinians. Sen. Bernie Sanders criticized Israel’s treatment of Palestinians during the campaign. His appointees to the Democratic platform committee wanted the platform to include references to Israel’s West Bank occupation and Israeli settlements. In the end, it did not.

A line declaring unequivocal support for Israel in Philadelphia could be met with boos by Sanders delegates concerned about supporting what they see as an oppressive country.

The irony here is that Clinton herself mostly toes the traditional pro-Israel line. While she supports the Iran deal, she also gave a warmly-received speech at this year’s AIPAC convention and vowed to meet with Benjamin Netanyahu soon after her potential inauguration. Wendy Sherman, who negotiated the Iran deal, told a panel Wednesday that Clinton instructed her personally to keep the occupation and settlements language out of the platform.

So maybe Clinton will be the one to drop the Israel line in her speech Thursday night. Stay tuned.