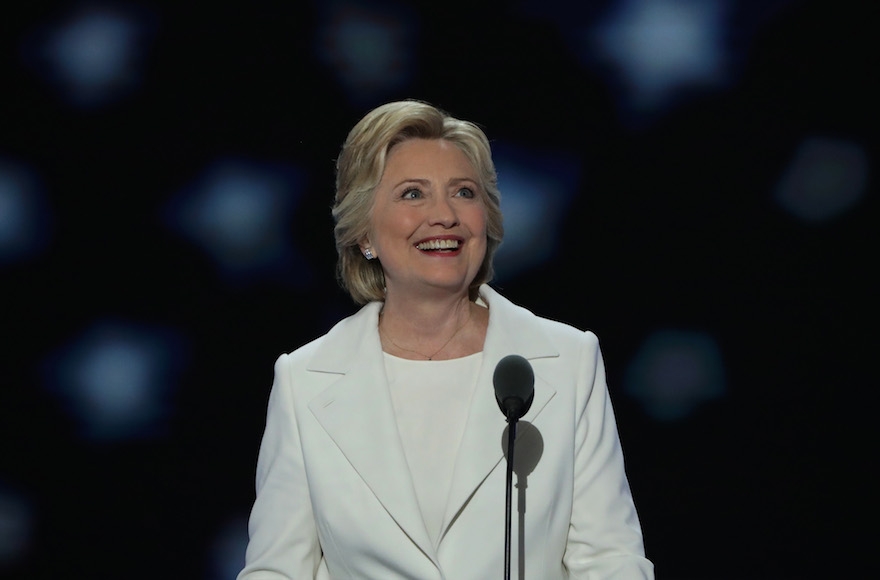 Clinton also celebrated her achievement as the first woman to receive a major party’s presidential nomination. And she talked tough on foreign policy, pledging to destroy terrorists and safeguard the United States’ traditional allies, including Israel.

She took pride in helping the United States reach a deal curbing Iran’s nuclear program. And she said her administration would enforce it.

“You want a leader who understands we are stronger when we work with our allies around the world and care for our veterans here at home,” she said. “I’m proud that we put a lid on Iran’s nuclear program without firing a single shot – now we have to enforce it, and keep supporting Israel’s security.”

Near the beginning of her speech, Clinton made an extended appeal to Sanders supporters, some of whom had expressed hesitation about supporting her. She promised to fight for progressive issues and to pay attention to their concerns.

“You’ve put economic and social justice issues front and center, where they belong,” she said to Sanders. “And to all of your supporters here and around the country: I want you to know, I’ve heard you. Your cause is our cause. Our country needs your ideas, energy, and passion. That’s the only way we can turn our progressive platform into real change for America.”

She pushed many key elements of Sanders’ platform in her speech, from eliminating public college tuition for most Americans to attacking free trade deals. Multiple times, she attacked Wall Street and corporations that ship jobs overseas.

“I’ve heard from so many of you who feel like the economy just isn’t working,” she said. “Some of you are frustrated – even furious. And you know what? You’re right. It’s not yet working the way it should. Americans are willing to work – and work hard. But right now, an awful lot of people feel there is less and less respect for the work they do.”

She also pledged to fight what she called “systemic racism” and work on reforming the criminal justice system. She said she would advocate for a range of minorities, particularly groups she accused the Republican nominee, Donald Trump, of unfairly attacking. She also promised to fight for gun control.

“We will reform our criminal justice system from end-to-end, and rebuild trust between law enforcement and the communities they serve,” she said. “We will defend all our rights – civil rights, human rights and voting rights, women’s rights and workers’ rights, LGBT rights and the rights of people with disabilities.”

She also promised to fight for a range of women’s and family issues — from paid family leave to abortion rights and equal pay for women. She couched that battle in her becoming the first woman to become a major party’s presidential nominee.

“Tonight, we’ve reached a milestone in our nation’s march toward a more perfect union: the first time that a major party has nominated a woman for president,” she said to cheers. “When any barrier falls in America, for anyone, it clears the way for everyone. When there are no ceilings, the sky’s the limit.”

Clinton acknowledged her sometimes stiff public image, as well as her intense focus on policy. But while speakers and videos before her speech revolved around humanizing her by telling her personal story, she admitted that “some people just don’t know what to make of me.” But she painted her wonkishness as a sign of caring rather than aloofness.

“The truth is, through all these years of public service, the ‘service’ part has always come easier to me than the ‘public’ part,” she said. She said she focuses on the details of policy “because it’s not just a detail if it’s your kid —  if it’s your family. It’s a big deal.”

She also recognized that Americans were anxious because of a string of terror attacks around the world, in the United States, Europe and the Middle East. But she said the best way to respond to those threats is through cool-headed leadership.

“America’s strength doesn’t come from lashing out,” she said. “Strength relies on smarts, judgment, cool resolve, and the precise and strategic application of power. That’s the kind of Commander-in-Chief I pledge to be.”

She attacked Trump as unstable, immature and bigoted. Echoing a theme speakers have touched on throughout the convention, she said he lacks the temperament to run the country.

“He loses his cool at the slightest provocation,” she said. “When he’s gotten a tough question from a reporter. When he’s challenged in a debate. When he sees a protester at a rally. Imagine him in the Oval Office facing a real crisis. A man you can bait with a tweet is not a man we can trust with nuclear weapons.”

Clinton is running close to Trump in the polls, and referred to divisions in the country. But if elected, she promised to serve her supporters as well as her detractors.

“I will be a President for Democrats, Republicans, and independents,” she said. “For the struggling, the striving and the successful. For those who vote for me and those who don’t.”