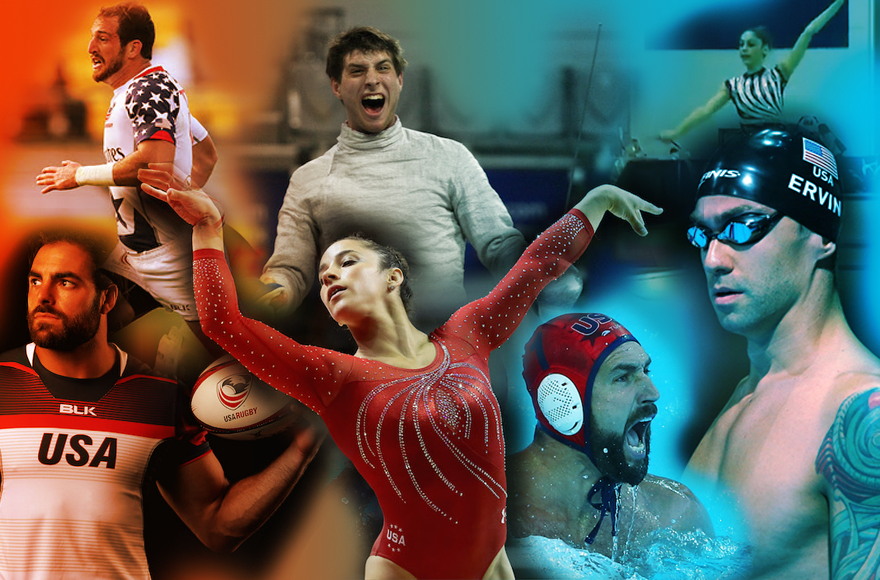 When the 2016 Summer Olympics open Friday, we’ll of course be cheering the American athletes — all 555 of them — and we’ll be rooting for Israel, too, which this year is sending its largest ever cohort to Rio.

But we’re saving a special shout-out for some of the Jewish-American Olympians who have given the Tribe extra reasons to be proud this year. (Interestingly, Jews make up about 2 percent of the U.S. population — and by our calculations, they’re represented by nearly the same proportion on Team USA.) 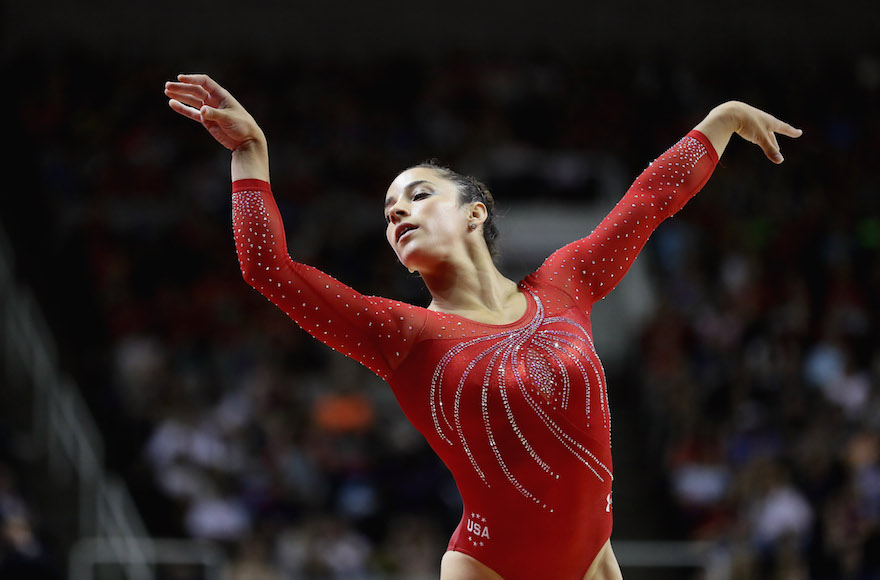 At the 2012 London Olympics, Aly Raisman quite possibly became the most popular Jewish athlete in the world when she won a floor gymnastics gold medal while performing to “Hava Nagila.” She didn’t stop there: Raisman brazenly noted the 40th anniversary of the massacre of 11 Israelis at the 1972 Munich games to reporters after her performance — the International Olympic Committee declined to recognize the killings by Palestinian terrorists.

Alas, four years is an eternity in the gymnastics world. At 22, Raisman is nicknamed “Grandma” by her teammates (not just because of her “advanced” age — she apparently also likes to nap). Nonetheless, the laser-focused star was recently named team captain. We’re rooting for her to make her mark again in Rio. 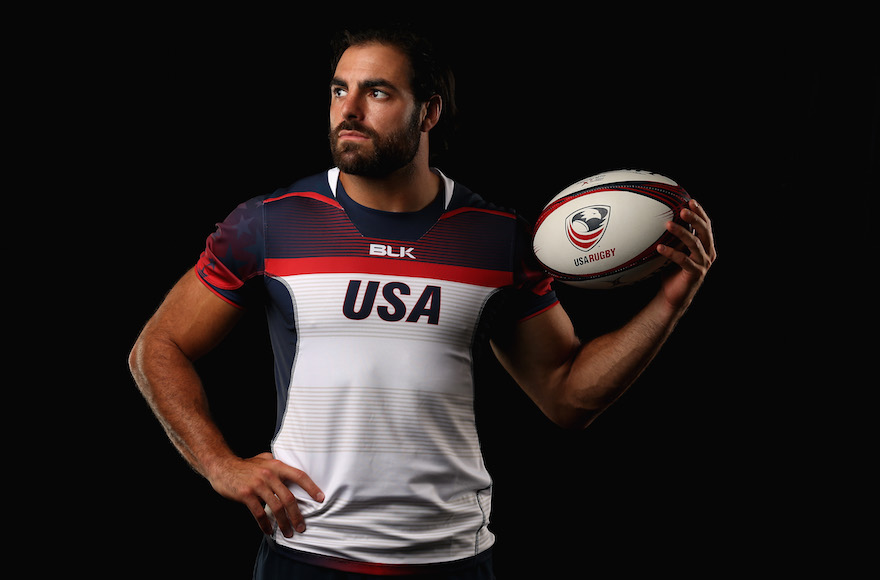 Until a couple of weeks ago, Ebner was “only” known as one of the few Jewish players in the NFL — the 27-year-old special teams ace and safety helped the New England Patriots win the Super Bowl in 2014.

But Ebner will now become the only active NFL player to make a U.S. Olympic team.

After being granted a leave of absence by the Patriots in May to train, Ebner — whose father was the Sunday school principal of Temple Sholom in Springfield, Ohio — made the rugby squad earlier this month.

The leap didn’t appear out of nowhere: Ebner was an All-America rugby player at Ohio State and played for the U.S. National team at 17, the youngest player to do so.

Rugby hasn’t been played in the Olympics since 1924, when the U.S. won a gold medal led by a Jewish player and manager, Samuel Goodman. It will be making a vivid return this year — the only style of the game to be played in Rio will be sevens, a fast-paced version featuring seven players per side and seven-minute halves compared to the typical 15 players and 40-minute halves. 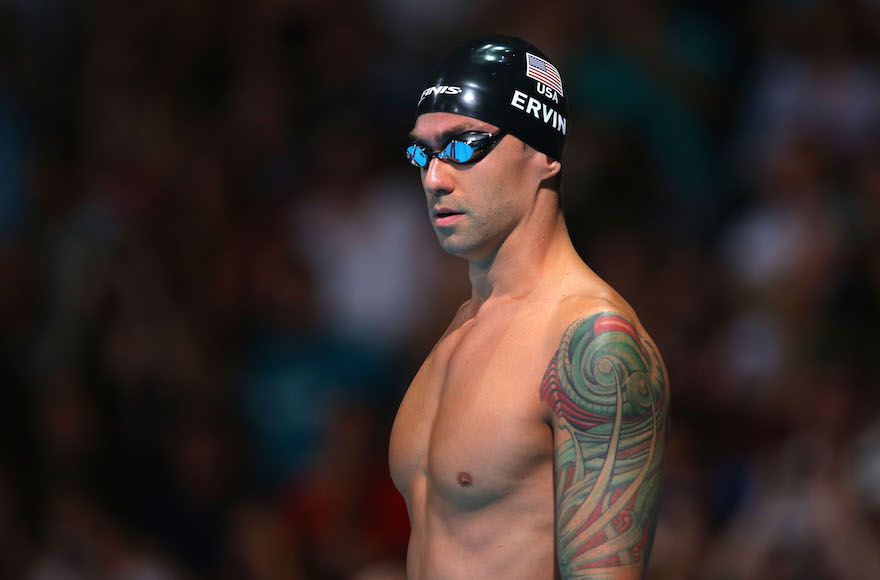 Born to an Ashkenazi Jewish mother and a father with both African-American and Native American heritage, swimmer Anthony Ervin has an interesting identity. He also has an unusual career arc for an Olympian.

After winning a gold medal in the 50-meter freestyle at the 2000 Olympics at age 19, Ervin felt burned out. He quit swimming in 2003, and as he details in a memoir published in April (“Chasing Water: Elegy of an Olympian”), spent his 20s experimenting with drugs, playing guitar and teaching the sport in Brooklyn. He nearly committed suicide by overdosing on the medication he takes for his Tourette syndrome. In an even more symbolic split from swimming, Ervin auctioned off his gold medal for $17,000 and donated the money to the Tsunami Relief Fund. 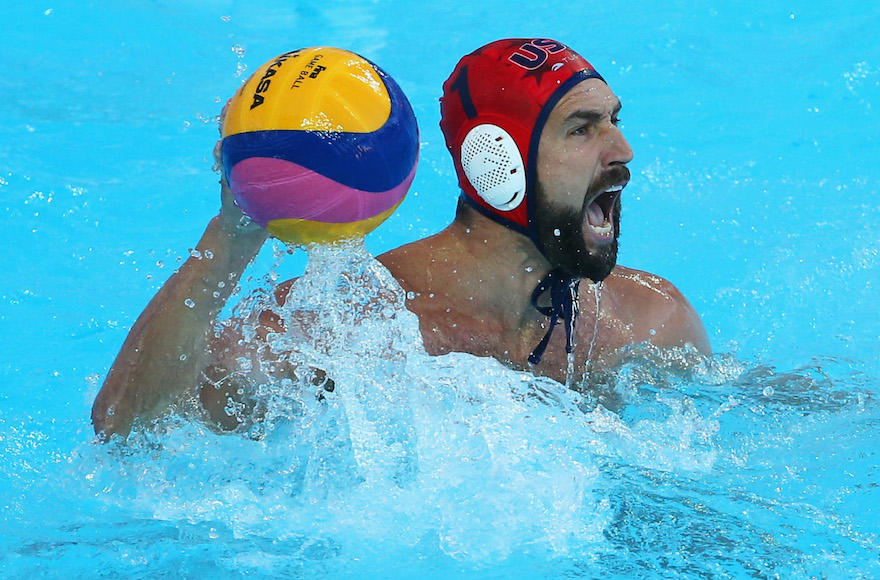 Merrill Moses of the U.S. team playing in a match against Russia at the 16th FINA World Championships in Kazan, Russia, July 27, 2015. (Streeter Lecka/Getty Images)

Not many athletes stay in peak shape long enough to participate in an Olympics at 39. But Merrill Moses, a water polo veteran of the 2008 and 2012 Olympics — and now a member of the Southern California Jewish Sports Hall of Fame — will do just that when he celebrates his birthday in the middle of the Rio games.

His secret might be his 6-foot-8-inch wingspan — or maybe it’s his confidence.

“I’ve been the best goalkeeper in the United States for 15 years,” Moses told Tribe Magazine last year. “I’ve seen the shots, been in this pressure.”

Moses will likely be in the starting lineup for his third straight Olympics. Here’s hoping the U.S. water polo team will win a gold medal this time; they took home a silver in 2008. 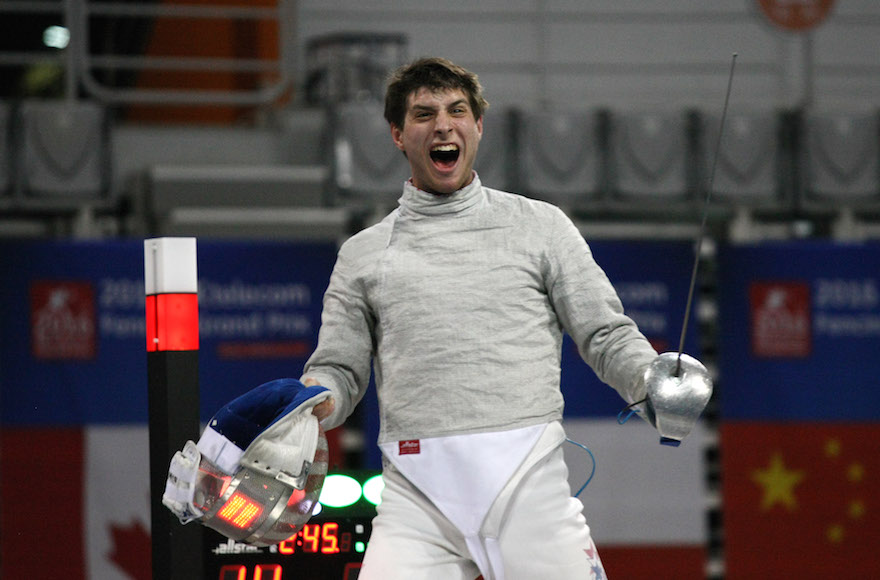 Don’t confuse Harvard undergrad Eli Dershwitz with the famous Harvard professor Alan Dershowitz. While the latter is a respected lawyer and author, the former happens to be one of the best fencers in the world.

Dershwitz, 20, of Sherborn, Massachusetts (just a few miles from Aly Raisman’s hometown of Needham), is one of only two U.S. men’s saber fencers heading to Rio. His performance at the fencing World Cup in February helped the U.S. saber team rise to a No. 1 world ranking. Look for Dershwitz, one of the youngest saber fencers in the world’s top 25, to seriously compete for a medal. 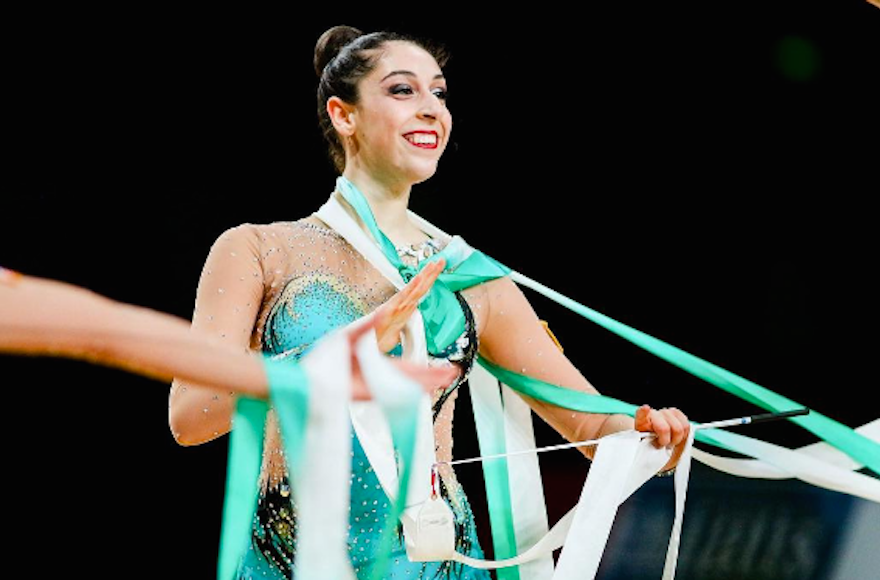 This year marks only the second time that the U.S. women’s rhythmic gymnastics team has qualified for the Olympics; the sport has been contested at the games since 1984. (In 1996, at the Atlanta Games, the squad was an automatic entry because it was representing the host nation.)

A rising star in this rising sport is Monica Rokhman, 19, who grew up near San Diego and is the daughter of Russian-Jewish immigrants. Rokhman and her twin sister, Jenny, also a gymnast, have been living in Chicago’s North Shore suburbs to train. Jenny will serve as an alternate for the U.S. team. 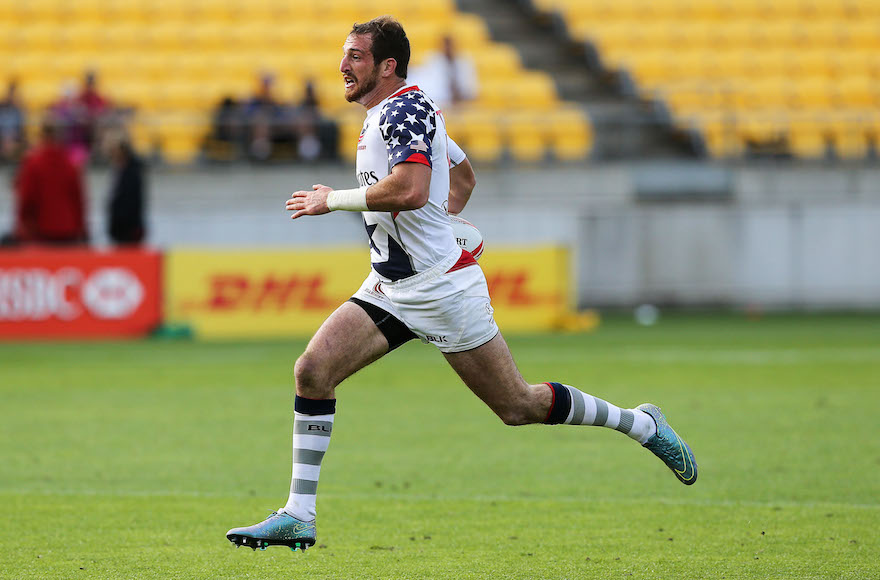 Remarkably, Nate Ebner isn’t the only Jewish member of the U.S. rugby team heading to Rio — he will be joined by Zack Test, 26, a standout on the men’s sevens roster.

Unlike Ebner, who took time off from the sport for his football career, Test has played eight consecutive years of international competition. The Northern California native and Jewish day school graduate is also one of the best players on the team — he tallied the third most points and second most tackles on the squad during its 2014-15 World Rugby Sevens World Series run.