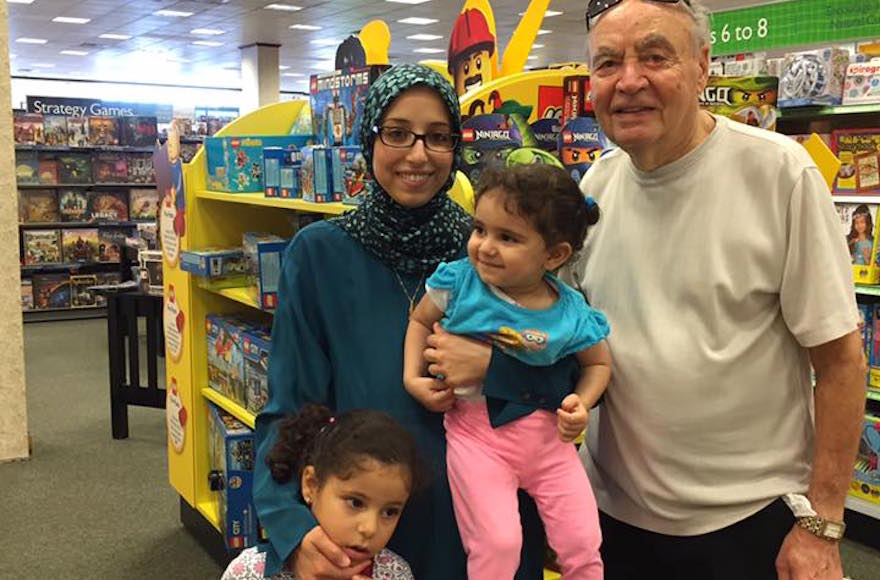 (JTA) — A Facebook post by a Muslim-American woman about the kindness of a 90-year-old Jewish man has been attracting the attention of thousands of social media users.

Leena Al-Arian wrote that she met a man on Thursday named Lenny at her Boston-area Barnes & Noble, where she took her two young daughters for a special children’s program.

Lenny approached the young family “and conveyed a heartfelt apology for the general anti-Muslim sentiment in our society today. He had tears in his eyes and told me that it must be so hard to turn on the news, that he feels awful about the bigotry my kids might one day experience, and that as a Jewish man whose parents didn’t speak any English growing up, he personally understands what it feels like to be rejected and discriminated against,” Al-Arian wrote in her Facebook post.

“I asked if I could give him a hug (he looked like he needed one more than me, but I guess I needed one too) and he wanted to reassure me that most Americans are decent people who don’t hate people like me or believe what they hear on the news,” she continued.

Lenny took a photo with the family and then bought the girls each a present at the store in honor of his 90th birthday on Friday.

Al-Arian said she decided to post it after a friend suggested she put it out there “to add to what I guess is our modern day chicken soup for the anti-racist soul.”

More than 7,400 people have liked the post, and 2,575 people have shared it as of Sunday afternoon.